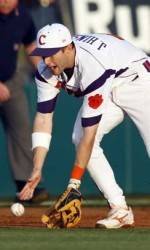 Notes The #16 Clemson Tigers went 0-4 in four games this past week, including three close losses. The Tigers lost at home to Western Carolina 7-5 on Wednesday night before getting swept at #5 Georgia Tech over the weekend, including two heartbreaking defeats. It was Clemson’s first winless week during the regular season since 2008 and the weekend sweep was also the Tigers’ first since 2008.

Tyler Kirkpatrick’s grand slam in the seventh inning lifted Western Carolina to a 7-5 win over Clemson at Doug Kingsmore Stadium on April 14. John Hinson’s two-run homer in the first inning gave the Tigers a 3-0 lead, then Wilson Boyd’s two-run single in the fifth inning broke a 3-3 tie. But the Catamounts loaded the bases with no outs in the seventh inning before Kirkpatrick’s go-ahead long ball. Western Carolina outhit the Tigers 11-4, as six Catamount pitchers held the Tigers to just two hits in the final eight innings. Boyd went 2-for-3 with two RBIs to pace Clemson.

In game-one on April 16, Chase Burnette hit a two-run homer in the 10th inning to give Georgia Tech an 8-6 walkoff win over Clemson. Mike Freeman hit a two-run homer in the first inning, then Georgia Tech responded with five runs in the second inning. Jeff Schaus’ three-run homer in the fifth inning capped the Tigers’ four-run frame to give Clemson the lead. Schaus went 2-for-4 with a homer and three RBIs to pace Clemson, who had 10 hits. Every Yellow Jacket starter had at least one hit, as the team had 12 hits in all.

In game-two on April 17, Jacob Esch and Jeff Rowland both hit run-scoring singles with two outs in the seventh inning to propel Georgia Tech to a 4-3 win over Clemson. Georgia Tech hit two solo homers sandwiched around a run-scoring double and solo home run by Parker, then the Tigers took a 3-2 lead in the top of the seventh inning on an error. But the two clutch hits by Esch and Rowland proved to be the difference. The Tigers were just 1-for-10 with runners in scoring position and left eight runners on base, including seven in scoring position.

In game-three on April 18, Georgia Tech scored in all eight of its innings at the plate in its 11-3 win over Clemson. Rowland, Tony Plagman, and Esch totaled four hits apiece, as the Yellow Jackets had 17 hits in all. Parker hit a solo homer in the top of the second inning, but Georgia Tech scored four runs in the bottom of the second and never looked back. Jed Bradley tossed 7.0 strong innings with eight strikeouts against no walks to earn the victory.

On the season, the Tigers sport a 23-14 overall record, including an 18-5 home record, 4-8 road mark, and 1-1 neutral-site record. The Tigers, who are 10-8 in the ACC, are in second place in the ACC Atlantic Division standings behind Florida State (12-6), who won two of three games at Duke over the weekend. Georgia Tech (15-3) leads the overall ACC standings, while Miami (FL) is second at 14-4. Clemson has played the nation’s toughest schedule according to the unofficial RPI at WarrenNolan.com, one reason the Tigers are 0-9 in their last nine games decided by two runs or less.

Parker leads the team with a .365 batting average, 14 homers, four doubles, 36 RBIs, a .730 slugging percentage, a .491 on-base percentage, and four steals in 34 games. He is only one of three Division I players in history to total at least 20 passing touchdowns and 10 home runs in the same academic year, as Rodney Peete of Southern California and Josh Fields of Oklahoma State are the other two. Neither Peete nor Fields hit more than 12 home runs in those seasons, therefore Parker is the only player in Division I history with 20 passing scores and at least 13 homers in the same academic year.

Freshman first-baseman Richie Shaffer was back in the starting lineup on Sunday. He had missed the previous 17 games due to a hamstring injury. Shaffer, who went 0-for-4 on Sunday, is hitting .321 with two homers and 11 RBIs in 18 games (15 starts) in 2010.

The Tigers will play four games, all at home, this upcoming week, beginning Wednesday night against USC Upstate. Then over the weekend, North Carolina will come to town for a three-game series. Wednesday’s game marks the first of eight straight home games for Clemson.