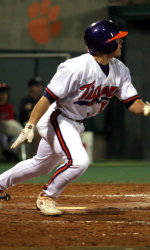 Notes Clemson went 5-0 in five games this past week, including winning both games of a home-and-home, midweek series against Georgia and sweeping Virginia Tech in Blacksburg. All five wins were by three runs or less.

Clemson, ranked #16 in the country, won both games against Georgia on April 3,4. The Tigers outscored the Bulldogs 15-12 despite being outhit .307 to .279. Addison Johnson was 5-for-7 with three RBIs in the two games.

Alan Farina pitched 3.1 scoreless innings in relief to lead Clemson to a 4-2 win at Georgia on April 3. With Clemson up a run in the fifth inning, Farina shut down Georgia, as he allowed just one hit and no walks with three strikeouts to pick up his first win as a Tiger. Stephen Clyne pitched a scoreless ninth inning to record his first save since 2005. Taylor Harbin’s two-run double in the fifth inning gave Clemson the lead for good, as he added another double later in the game. Brad Chalk and Johnson also had two hits apiece. The Tigers did not commit an error, and Clemson only allowed six Bulldog hits and no walks in the contest.

Johnson’s two-out, walkoff double in the ninth inning lifted Clemson to an 11-10 win over Georgia at Doug Kingsmore Stadium on April 4. The Tigers trailed by a run in the ninth inning before Wilson Boyd hit a one-out triple. D.J. Mitchell singled home Boyd to tie the score, stole second, and scored on Johnson’s double to left field, his third hit of the contest. Georgia outhit Clemson 17-11 and hit four home runs. The Bulldogs scored three runs apiece in the fifth, sixth, and seventh innings, but Clemson responded with runs in each of those innings, including a four-run seventh inning that was highlighted by Boyd’s three-run triple. Clyne, the eighth pitcher of the night for Clemson, earned the win after retiring the only batter he faced.

Clemson swept Virginia Tech in chilly and windy Blacksburg, VA by a combined score of 19-10, as the Tigers won all three games by three runs. The Tigers outhit the Hokies .286 to .262 and hit 11 extra-base hits, including four homers. Mitchell was 5-for-10, while Marquez Smith went 4-for-11 with two homers. Clemson, who committed only two errors in the series, had a 2.55 ERA and 24 strikeouts against only seven walks.

In game-one, Smith hit a two-run homer to lead Clemson to a 6-3 win at Virginia Tech in a game that started on April 6 and ended on April 7 due to snow. Neither team could break through with big hits, as Clemson left 12 runners on base and Virginia Tech stranded 11. Mitchell had three hits, including two doubles. The Hokies totaled 13 hits, but they were all singles. Matt Vaughn pitched 5.0 innings to earn the win in relief of Daniel Moskos, who allowed one run in 4.0 innings pitched in his first career start. The Tigers, who totaled five sacrifice bunts and three steals, did not commit an error in 44 chances as well.

In game-two, David Kopp pitched 7.0 solid innings in Clemson’s 8-5 victory at Virginia Tech on April 7. Kopp earned the win, as he allowed two runs on five hits with six strikeouts. The Tigers took control with four runs in the first two innings, highlighted by Mitchell’s run-scoring single in the second inning. Clemson added three insurance runs in the eighth inning thanks in part to Boyd’s two-run single through the left side. Harbin had two hits, including a solo home run, and Mitchell added two hits and two runs scored. Both teams had 10 hits as well.

In game-three, Doug Hogan blasted a three-run homer in the 10th inning to lead Clemson to a 5-2 win at Virginia Tech on April 8. Smith hit a solo home run in the first inning, but the Hokies scored single runs in the first and third innings to take the lead. Clemson tied the score in the seventh inning on Harbin’s sacrifice fly. Smith led off the 10th inning with and infield single, then Ben Paulsen singled through the right side on a hit-and-run. Hogan followed with a towering three-run homer to left field, his first long ball in 27 games. Farina pitched 4.1 hitless and scoreless innings in relief with seven strikeouts to earn the victory, while Clyne picked up the save.

During the week, the Tigers hit .283 with a .392 on-base percentage, 27 walks, nine sacrifice bunts, and 10 stolen bases. The Tigers won all five games despite combining to go just 5-for-45 (.111) with two outs on the week, while its opponents hit .368 in that situation. Clemson also had a .975 fielding percentage and outscored its opponents by a combined score of 34-22.

The pitching staff had a 3.72 ERA and .280 opponents’ batting average during the week. The staff also totaled 38 strikeouts against only 12 walks.

Farina had two outstanding relief appearances during the week. He earned wins at Georgia on Tuesday and at Virginia Tech on Sunday. In those two outings, he combined for 7.2 innings, allowing just one hit, no runs, and two walks with 10 strikeouts. Clyne added two saves.

On the season, Clemson, who is 23-9 overall and 8-4 in ACC play, has won five games in a row overall and five straight road games as well. The team is hitting .289 with a .373 on-base percentage. Chalk is hitting a team-high .393 with a .518 on-base percentage. Hogan is batting .355, while Smith is hitting .333 with six homers and 27 RBIs. Andy D’Alessio, who suffered a groin injury against Miami (FL) on April 1, did not play in any of the five games this past week.

Clemson will play host to South Carolina on Wednesday night in the third of four regular-season meetings. Then over the weekend, the Tigers will be back on the road, as they will play at Wake Forest in a three-game series beginning Friday afternoon.