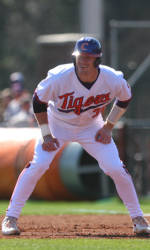 Notes Clemson went 4-1 in five games this past week, including winning midweek games against #21 Coastal Carolina and Furman, and winning two of three close games against N.C. State over the weekend.

Doug Hogan hit two homers and drove in five runs to lead Clemson to a 9-6 victory over Coastal Carolina on March 18 at Doug Kingsmore Stadium. The Tigers built an 8-0 lead after two innings, as Hogan hit a two-run homer in the first inning and three-run long ball in the second inning. John Hinson also added his first career home run, a two-run shot in the second inning. The Chanticleers narrowed the score to 9-6 on Tommy Baldridge’s two-run homer in the ninth inning, but it was not enough. Five of Clemson’s six hits went for extra bases. Wilson Boyd’s 14-game hitting streak came to an end, as he was 0-for-2 with two runs scored and three walks. Justin Sarratt picked up his first career win in relief as well.

Hogan hit two homers and drove in six runs to lead Clemson to a 14-2 victory over Furman on March 20 at Doug Kingsmore Stadium. Hogan went deep twice for the second straight game, as he hit a grand slam in the fourth inning and two-run homer in the fifth inning. Alex Lee added three hits for the Tigers, who totaled 15 hits in the game. Starter Craig Gullickson pitched 6.0 innings, allowing four hits, no runs, and two walks with eight strikeouts to pick up the win. Four Tiger pitchers held the Paladins to nine hits, including just one hit in 12 at-bats with runners in scoring position.

Clemson won two of three games over N.C. State from March 21-23 at Doug Kingsmore Stadium. The Tigers outscored the Wolfpack 9-7 and outhit N.C. State .278 to .211 in the series. Kyle Parker went 6-for-11 (.545) to lead the Tigers. Clemson also had a 1.67 ERA and struck out 21 against only four walks. Six Tiger pitchers combined to allow just three hits in 31 at-bats with runners on base as well.

In game-one on March 21, N.C. State rallied for a 5-4 victory over Clemson at Doug Kingsmore Stadium. In the fifth inning, Ben Paulsen hit a three-run homer and Parker followed with a solo home run to give Clemson a 4-2 lead. But the Wolfpack responded with back-to-back solo homers by Ryan Pond and Russell Wilson in the sixth inning to tie the score. Then in the eighth inning, Nick Stanley’s sacrifice fly scored the go-ahead run. The Tigers had a runner at second base with no outs in both the eighth and ninth innings, but they were unable to score in each frame. Clemson, who had 16 batters reach base, stranded 10 baserunners. Parker led the Tigers with three hits.

In game-two on March 22, Clemson scored three runs in the seventh inning to defeat N.C. State 3-2 at Doug Kingsmore Stadium. The Wolfpack scored two unearned runs in the sixth inning thanks to two Tiger errors. But in the seventh inning, singles by Parker, Mike Freeman, and Hinson helped plate two runs, then J.D. Burgess’ groundball double play scored the go-ahead run. Starter D.J. Mitchell allowed seven hits, no earned runs, and one walk with five strikeouts to earn the win, while Matt Vaughn pitched 2.0 hitless and scoreless innings to record the save. The two Tiger hurlers held N.C. State to 0-for-13 with runners on base and 0-for-5 with runners in scoring position.

In game-three on March 23, Doug Kingsmore Stadium. Stoneburner allowed just two singles and one walk with seven strikeouts to record the Tigers’ first individual shutout since 2005. He threw 118 pitches and allowed just one Wolfpack player to reach second base, while none reached third base in a game that lasted just one hour and 58 minutes. Clemson scored two runs in the first inning. Boyd brought home Clemson’s first run on an RBI groundout, while Hogan later stole third and scored on a throwing error on the play. Hogan had a game-high two hits, including a double and triple.

During the week, the Tigers hit .289 with a .377 on-base percentage, 32 runs, seven homers, and seven stolen bases in five games. The pitching staff had a 2.40 ERA and .235 opponents’ batting average as well.

Stan Widmann led the Tigers by going 8-for-16 (.500) with three doubles and four stolen bases in four games. Hogan was 8-for-20 (.400) with six runs scored, two doubles, a triple, four homers, and 11 RBIs in five games. Parker added eight hits as well. On the mound, Stoneburner pitched 9.0 scoreless innings of two-hit ball, while Mitchell allowed just seven hits, no earned runs, and three walks with seven strikeouts in 8.0 innings pitched over two outings.

The pitching staff has a 4.31 ERA and .272 opponents’ batting average on the season. Stoneburner has a 4-0 record, 2.70 ERA, and .198 opponents’ batting average in five starts and one relief appearance. In 30.0 innings pitched, the red-shirt freshman has allowed 21 hits, nine runs, and five walks with 24 strikeouts. Mitchell has a 2-2 record and 3.24 ERA, while Vaughn has six saves.

Clemson will conclude its 12-game homestand with a two-game, midweek series against Elon on Tuesday and Wednesday. The Tigers will then travel to Maryland for a three-game series over the weekend.