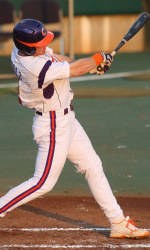 Clemson went 2-3 in five games this past week, which included a pair of midweek wins over Elon and Virginia’s three-game sweep of the Tigers in Charlottesville over the weekend.

On the week, the Tigers were outscored 20-17 and batted .241 with a .304 slugging percentage and .326 on-base percentage. They also totaled two doubles, one triple, two homers, 19 walks, and six stolen bases. Clemson fielded at a .973 clip as well.

The Tiger pitching staff had a 3.86 ERA and .264 opponents’ batting average on the week. The staff also allowed 42 hits and 19 walks with 38 strikeouts in 42.0 innings pitched.

Clemson swept Elon in a two-game, midweek series by a combined score of 10-4 at two different sites on March 20,21. Clemson outhit the Phoenix .290 to .217 and totaled 12 walks and six steals while not committing an error in the field. Wilkerson went 5-for-8 with two walks to lead the Tigers at the plate. The Clemson pitching staff had a 2.00 ERA with 22 strikeouts against only three walks in the series.

In game-one at Doug Kingsmore Stadium on March 20, Wilkerson went 4-for-4 with two RBIs and a walk to lead Clemson to a 6-2 win over Elon. The first three Tiger batters in the first inning walked, and all three scored to give Clemson a 3-0 lead. Elon never drew closer than two runs despite outhitting the Tigers 10-9. Jonathan Meyer pitched 5.0 innings, allowing one run and no walks with five strikeouts to earn the win. Kent pitched the final 2.0 innings without allow a hit, run, or walk. Meyer, Patrick Andrews, and Kent combined to allow only two of Elon’s 12 baserunners to score.

In game-two at Fluor Field in Greenville, SC on March 21, Daniel Gossett struck out 10 batters to lead Clemson to a 4-2 win over Elon. Gossett earned his first career victory by pitching 7.0 strong innings. He gave up just three hits (all in the first inning), two runs, and two walks, as he retired the last 13 batters he faced. In his first start of the season, Mike Dunster went 3-for-4 with a double and all three of Clemson’s RBIs. The win was Jack Leggett’s 1,200th of his career, as he became the 15th coach in history to reach that mark as a Division I head coach.

Virginia then swept Clemson by a combined score of 16-7 at UVa Baseball Stadium from March 23-25. Virginia outhit the Tigers .300 to .208 and committed just one error in the series. Wilkerson led Clemson at the plate by going 5-for-13 (.385) with a triple, while Stolz contributed four hits. The Tiger pitching staff had a 5.25 ERA as well.

In game-one on March 23, Jared King went 3-for-4 with a triple and four RBIs to lead Virginia to a 6-3 win over Clemson. The Cavaliers scored two unearned runs in the first inning and never relinquished their lead. Virginia scored three runs in the eighth inning, then the Tigers scored two runs in the ninth inning. But it was not enough, as Clemson’s five-game winning streak came to an end. Stolz went 3-for-4 to lead Clemson’s eight-hit performance. Kent pitched 5.1 strong innings in relief for the Tigers.

In game-two on March 24, Branden Kline pitched a complete-game two-hitter to lead Virginia to a 5-1 win over Clemson. Wilkerson led off the game with a triple and scored the Tigers’ only run on Stolz’s groundout in the first inning, then Kline was masterful the rest of the way. He allowed only two batters to reach base, both on hits, and retired the last 18 batters of the game. The Cavaliers scored one run in the third inning, two runs in the third, and two runs in the fourth. Keith Werman had two hits and two RBIs to lead Virginia.

In game-three on March 25, Derek Fisher went 2-for-2 with a triple, double, and three runs to lead Virginia to a 5-3 win over Clemson. Phil Pohl’s solo homer in the sixth inning cut Virginia’s lead to 3-2, but the Tigers could not tie the score. Wilkerson went 3-for-4 with two RBIs to pace the Tigers, who outhit the Cavaliers 10-8. But Virginia turned three crucial double plays. Werman added two infield hits and two RBIs. Justin Thompson recorded his second save of the series by pitching a scoreless ninth inning.

Clemson has an 11-11 overall record and a 3-6 ACC mark on the season. Despite the .500 record, Clemson has outscored its opposition by 19 runs.

Clemson’s struggles at the plate have not been a result of its inability to get leadoff batters on base. Its leadoff batters of an inning have reached base 45.3 percent of the time in 2012.

Steve Wilkerson has emerged as the team’s top hitter of late after moving into the leadoff spot in the lineup. He has hit safely in the last 10 games and is hitting .393 overall. The sophomore second-baseman has also totaled 13 RBIs and 16 runs in 19 games (19 starts).

Richie Shaffer is second on the team with a .316 batting average and .470 on-base percentage. Phil Pohl (.304) and Jason Stolz (.303) are also hitting over .300. Shaffer, Pohl, and Brad Felder are tied for the team lead with four homers apiece.

Scott Firth has been the team’s best reliever, as he is 1-0 with a 1.04 ERA in 17.1 innings pitched over nine relief appearances. He also has 21 strikeouts and has allowed only one extra-base hit.