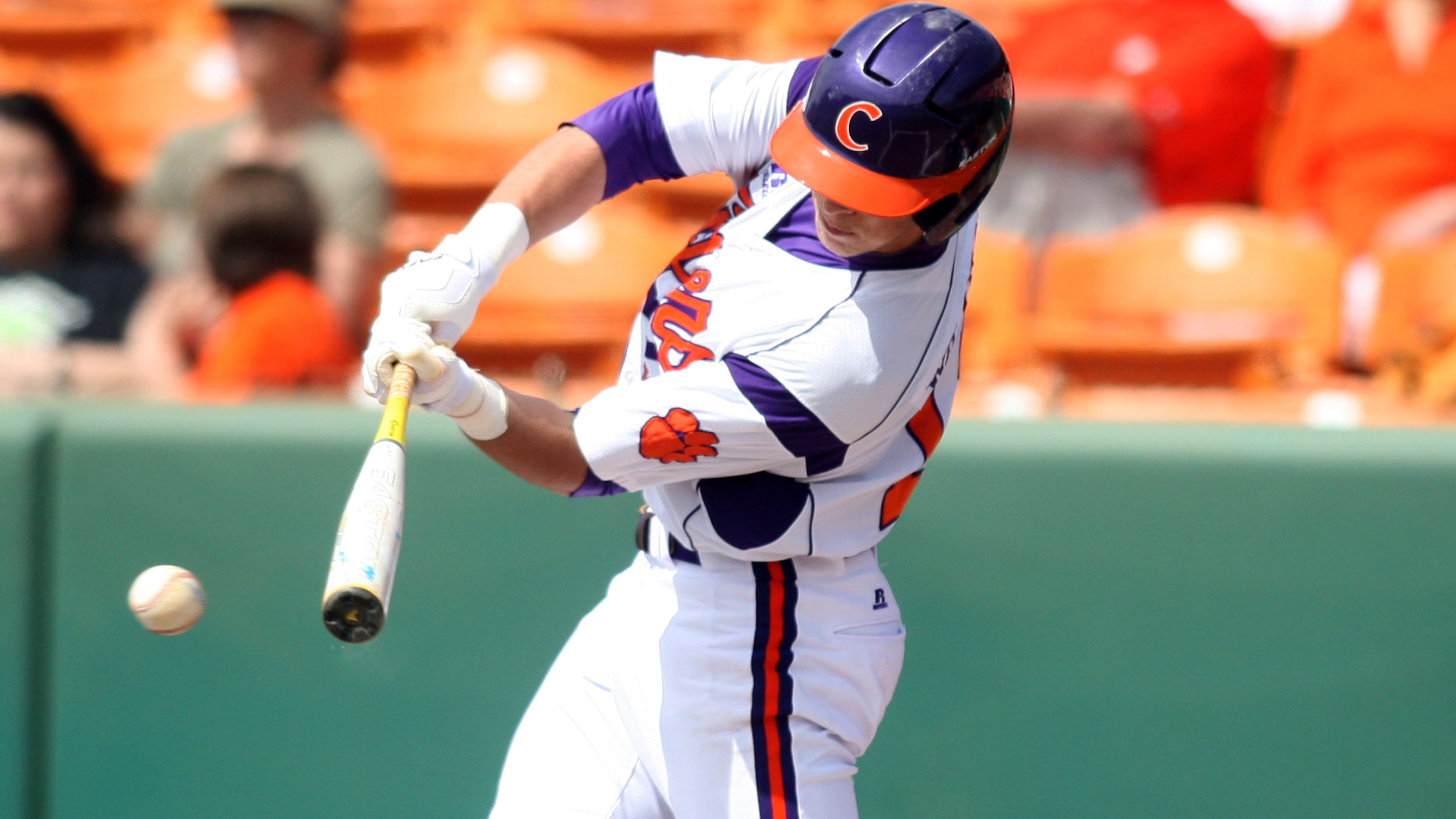 Last Week’s Game NotesClemson went 2-2 in four home games this past week, as the four contests were decided by a total of eight runs. Clemson defeated Charleston Southern 3-1 on Wednesday before falling twice in three games against #12 Virginia over the weekend.

On the week, the Tigers were outscored 21-20 and batted .277 with a .390 slugging percentage and .316 on-base percentage. They also totaled six doubles, two triples, two homers, nine walks, and four stolen bases. Clemson fielded at a .956 clip as well.

The Tiger pitching staff had a 4.74 ERA and .275 opponents’ batting average on the week. The staff also allowed 41 hits and eight walks with 27 strikeouts in 38.0 innings pitched.

In 7.1 innings pitched over three relief appearances, Zack Erwin was 1-0 and gave up just four hits (.160 opponents’ batting average), one earned run (1.23 ERA), and one walk with five strikeouts.

Three first-year pitchers combined to allow only five hits and one unearned run in Clemson’s 3-1 win over Charleston Southern at Doug Kingsmore Stadium on March 13. The Tigers scored two runs in the first inning and added a run in the seventh inning. The Buccaneers scored a run in the eighth inning and threatened to tie the score in the eighth and ninth innings before Kyle Schnell shut the door with his first career save. Matthew Crownover allowed just three hits, no runs, and no walks with two strikeouts to earn the win. Erwin did not give up an earned run in 1.2 innings pitched in relief as well.

Virginia then won two of three games over Clemson by a combined score of 20-17 at Doug Kingsmore Stadium from March 15-17. The Tigers outhit the Cavaliers .307 to .305 and totaled five doubles, two triples, and two homers along with going 14-for-31 (.452) with runners in scoring position in the series. Slaton went 4-for-6 with a double and two RBIs, while Wilkerson went 7-for-15 (.467) with two doubles and two RBIs. The Tiger pitching staff had a 6.21 ERA and 23 strikeouts against eight walks in 29.0 innings pitched.

In game-one on March 15, Mike Papi hit a solo home run in the 11th inning to lift Virginia to a 6-5 win over Clemson in 11 innings. Papi’s pinch-hit, run-scoring single with two outs in the ninth inning capped Virginia’s three-run frame to tie the score. The Tigers built a 5-1 lead thanks in large part to Kennedy’s two-run homer in the second inning. Starter Daniel Gossett pitched 7.0 strong innings, allowing five hits, two runs, and no walks with six strikeouts. The Cavalier bullpen gave up just two hits and no runs with six strikeouts in 4.2 innings pitched.

In game-two on March 16, Garrett Boulware hit a walkoff single with two outs in the ninth inning to score Thomas Brittle and give Clemson a 7-6 win over Virginia. The Tigers built a 6-3 lead before Virginia tied the score 6-6 with a run in the eighth inning. Wilkerson kept the ninth inning alive with an infield single before Boulware’s walkoff single to the gap in right-center. Boulware went 3-for-5 with a homer, triple, and four RBIs, while Brittle scored a game-high three runs. Erwin earned his first career win by allowing just one hit and one run with three strikeouts in 5.0 innings pitched in relief. Jack Leggett recorded his 1,235th career win, moving him into a tie for 12th place with Larry Cochell in all-time victories as a head coach at the Division I level.

In game-three on March 17, Virginia scored five combined runs in the first two innings and held on for an 8-5 win over Clemson. The first 11 Tiger batters of the game were retired, but Clemson totaled 14 hits in the final six innings. Wilkerson and Slaton had three hits apiece to lead the Tigers. Branden Cogswell, Jared King, and Nate Irving had three hits apiece in Virginia’s 15-hit attack, while King added a game-high three RBIs and a game-high three runs. Cavalier starter Nick Howard allowed two runs in 6.0 innings pitched to earn the win.

2013 Season NotesClemson has an 11-7 overall record and a 3-3 ACC mark on the season. Nine of Clemson’s 18 games have come against teams ranked in the top 12 in the nation (three games each against #7 South Carolina, #8 N.C. State, and #12 Virginia), and only four of those nine games were at Doug Kingsmore Stadium.

Clemson’s unofficial RPI (according to WarrenNolan.com) is #20 in the nation thanks in large part to the Tigers playing the nation’s fifth-toughest schedule. The Tigers are tied for second place in the ACC Atlantic Division standings with N.C. State and two games behind first-place Florida State (5-1). Clemson is tied for sixth place in the overall ACC standings. Georgia Tech and North Carolina are atop the ACC Coastal Division standings with a 5-1 league mark.

The Tigers, who are averaging 4.9 runs per game, are hitting .260 with a .352 slugging percentage and .328 on-base percentage thanks to 53 walks and 11 hit-by-pitches. The team has also totaled 29 doubles, three triples, seven homers, and 24 stolen bases. The Tigers are 8-1 when outhitting their opponents and 3-6 when they fail to outhit their opponents. The Tigers have been successful with runners in scoring position, hitting .342 in that situation. Clemson is fielding at a .968 clip as well.

Garrett Boulware leads the team with a .333 batting average, four doubles, one triple, a team-high three homers, and 15 RBIs. Steve Wilkerson is batting .329 with a team-high five doubles, one homer, 13 RBIs, and a team-tying-high six stolen bases.

The pitching staff has a 2.91 ERA and .251 opponents’ batting average in 164.0 innings pitched this season. It has allowed 156 hits and 53 walks with 127 strikeouts, good for a 2.40 strikeout-to-walk ratio. Clemson had gone 13 games in a row with allowing three earned runs or less until Virginia snapped that streak on Friday. That was Clemson’s longest streak since 2006, when the Tigers also had a 13-game streak.

Sophomore righthander Daniel Gossett leads the weekend rotation with a 2-1 record, 1.71 ERA, and .200 opponents’ batting average in five starts. In 31.2 innings pitched, he has 31 strikeouts against 11 walks. Freshman lefthander Zack Erwin has emerged as one of the top relievers. In 10.0 innings pitched over seven relief appearances, he has given up just five hits (.147 opponents’ batting average), one earned run (0.90 ERA), and two walks with nine strikeouts. Sophomore righty Kyle Schnell has a 1.29 ERA and 10 strikeouts against only one walk in 14.0 innings pitched over a team-high nine relief appearances as well.

Clemson will conclude its nine-game homestand with five home games over Spring Break next week. The Tigers will host Morehead State in a two-game, midweek series before facing Duke in a three-game series over the weekend.