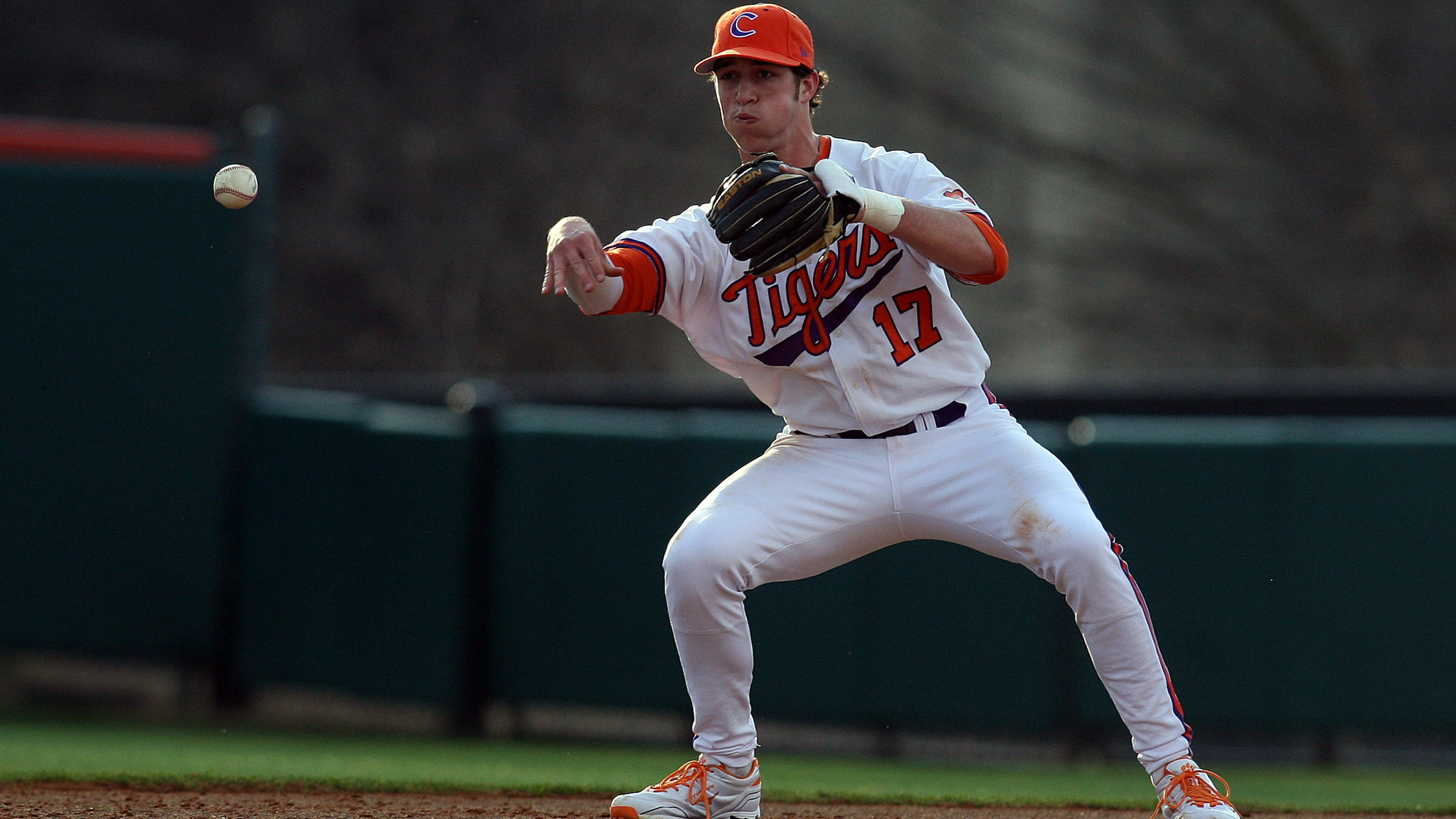 Last Week’s Game NotesClemson won two of three games over William & Mary by a combined score of 16-13 at Doug Kingsmore Stadium from February 15-17. The Tigers outhit William & Mary .305 to .257 and totaled eight doubles. Clemson’s eight freshmen who saw action at the plate combined to go 13-for-31 (.419). Freshman Steven Duggar went 5-for-9 (.556) with two doubles and two walks, while Steve Wilkerson added five hits and four RBIs. The Clemson pitching staff had a 4.00 ERA and 21 strikeouts against nine walks.

In game-one on February 15, Shane Kennedy belted a two-out, two-run homer in the eighth inning to lift Clemson to a 2-0 win over William & Mary. Both starting pitchers flustered the opposition during the first seven innings before Wilkerson’s two-out bunt single in the eighth inning set up Kennedy’s first hit as a Tiger. Starter Daniel Gossett pitched 6.2 scoreless innings with six strikeouts. Clay Bates pitched 1.1 innings in relief to earn his first win as a Tiger, while Matt Campbell retired both batters he faced with runners on second and third to record the save. The game lasted just 1:56, Clemson’s shortest game since 2006.

In game-two on February 16, William & Mary pounded out 16 hits en route to an 11-2 win over Clemson. The win was William & Mary’s first in the fifth all-time meeting between the two. The Tribe scored in five different innings despite not putting the leadoff batter on base in any of those frames. Ryan Lindemuth went 4-for-5, while Michael Katz went 3-for-4 with four RBIs to lead the Tribe. Starter John Farrell tossed 7.0 effective innings to earn the win. Clemson totaled 10 hits, as Kennedy and Jay Baum had two hits apiece.

In game-three on February 17, Clemson scored all 12 of its runs in its last three innings at the plate to defeat William & Mary 12-2. The Tigers put just one batter on base in the first five innings, then they erupted for 12 runs on 14 hits in the sixth, seventh, and eighth innings despite not putting their leadoff batter on base in any of those three innings. Clemson, who had 15 hits in the game, pulled away with its six-run seventh inning, highlighted by Wilkerson’s three-run double. Wilkerson led the Tigers with two hits and a game-high four RBIs. Starter Scott Firth allowed just two hits and one run in 7.0 innings pitched to earn the victory.

Clemson will return to action on Friday when it hosts Wright State in a three-game series. First pitch on Friday is scheduled for 4:00 PM.