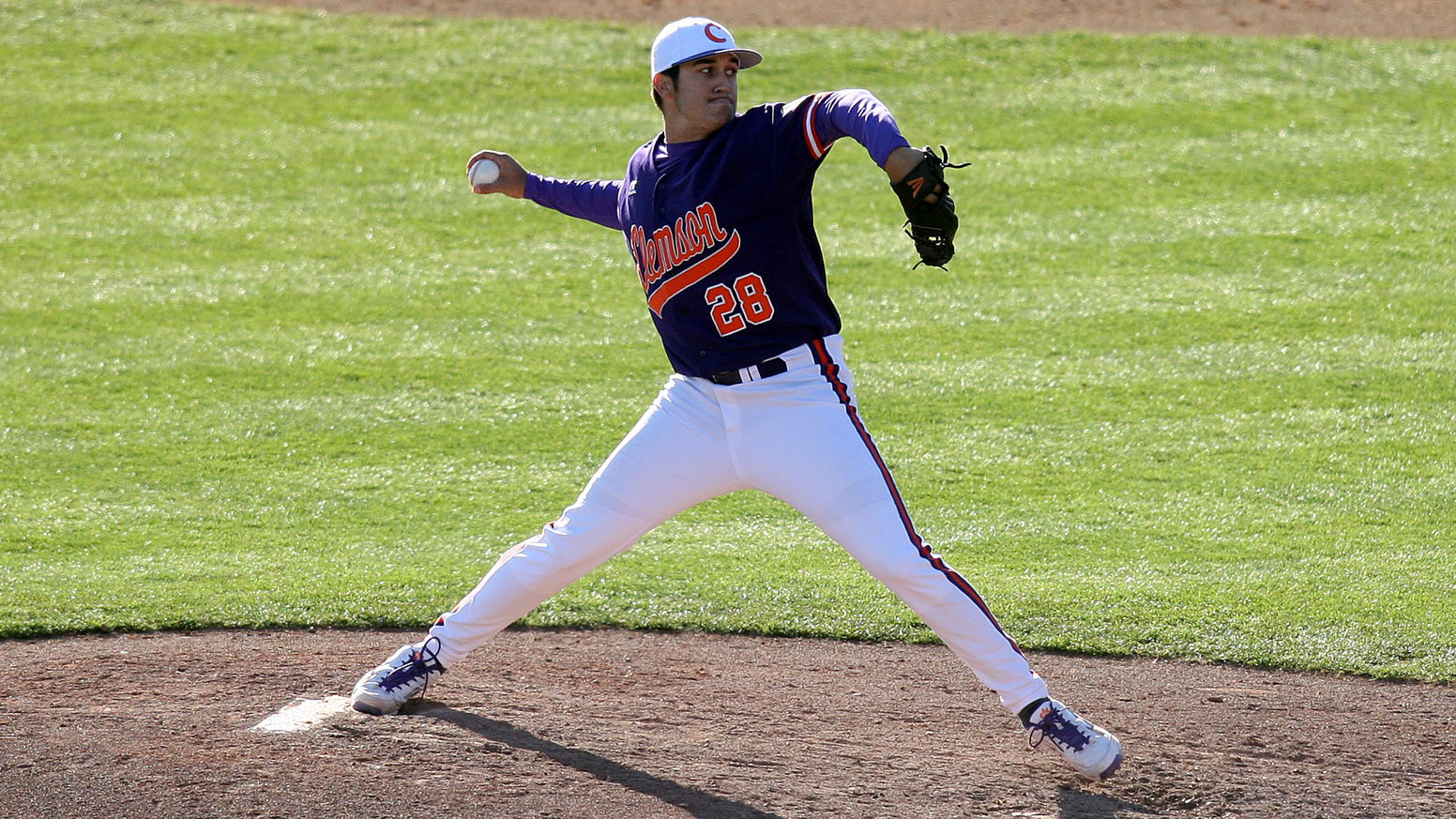 Last Week’s Game Notes & RecapsClemson, ranked as high as #14 in the nation, went 2-2 in four games this past week. Clemson edged USC Upstate 8-7 in dramatic fashion at home on Tuesday night before winning one of three games at #8 Florida State from Thursday to Saturday to close the regular season.

On the week, the Tigers outscored the opposition 18-17 and batted .279 with a .393 slugging percentage and .373 on-base percentage. They also totaled seven doubles, three homers, 15 walks and six hit-by-pitches against 24 strikeouts, and 11 stolen bases. Clemson fielded at a .979 clip as well.

The Tiger pitching staff had a 4.24 ERA and .269 opponents’ batting average on the week. The staff also allowed 35 hits and 12 walks with 23 strikeouts in 34.0 innings pitched.

Bradley hit a three-run, walkoff homer with one out in the ninth inning to lift Clemson to an 8-7 win over USC Upstate at Doug Kingsmore Stadium on May 14. The Spartans scored six runs in the third inning to take a 6-4 lead. Trailing 7-5 and with runners on the corners in the ninth inning, Bradley belted an opposite-field home run, the first long ball of his career, to left field. Bradley went 2-for-3 with two runs, one walk, and one hit-by-pitch, as he only started at first base at the last minute due to Jon McGibbon‘s illness. Scott Firth recorded the victory.

Florida State won two of three games over Clemson at Dick Howser Stadium from May 16-18. Both teams scored 10 runs, while Clemson outhit the Seminoles .295 to .261 in the series. Clemson also totaled six doubles, two homers, 10 walks, and eight steals. McGibbon led the Tigers by going 6-for-10 , while Brittle went 4-for-9 with two walks and a hit-by-pitch. The Tiger pitching staff had a 3.60 ERA and 15 strikeouts. Clemson committed only one error in the series as well.

In game-one on May 16, Daniel Gossett tossed 6.0 scoreless innings of three-hit ball to lead Clemson to an 8-2 win over Florida State. Gossett allowed just three singles and three walks with three strikeouts to earn the victory. Campbell pitched 2.0 hitless and scoreless innings with three strikeouts to close out the game. Clemson scored six combined runs in the first four innings and added two runs in the sixth inning. Wilkerson hit a solo homer in the first inning, while Brittle hit an inside-the-park, two-run homer in the third inning.

In game-two on May 17, Florida State scored two runs in the first inning and held on for a 2-1 victory over Clemson. The Tigers put their leadoff batter on base in five straight frames from innings 3-7, but only scored a single run in the sixth inning on Shane Kennedy‘s run-scoring groundout. Wilkerson went 3-for-4 with a run and steal to lead the Tigers, who outhit the Seminoles 7-5. Starter Luke Weaver struck out eight in 7.1 innings pitched to earn the win. Clate Schmidt pitched 3.2 hitless and scoreless innings in relief for the Tigers as well.

In game-three on May 18, Brandon Leibrandt and Billy Strode combined to allow only one run on 13 hits in Florida State’s 6-1 win over Clemson. The Tigers scored one run in the first inning, but they could not score again. Clemson had 16 batters reach base, but left 13 runners on base, including 10 in scoring position. McGibbon had a game-high three hits, while Steven Duggar added two hits and Clemson’s only RBI of the game. Both teams had 13 hits in the contest. Florida State clinched the ACC Atlantic Division title with the victory.

The Tigers finished third in the ACC Atlantic Division standings behind Florida State (20-10) and N.C. State (19-10). Clemson also had the fifth-best conference ledger among all ACC teams.

Freshman lefthander Matthew Crownover leads the staff with a 7-2 record and 2.05 ERA in 66.0 innings pitched over 14 appearances (13 starts). Crownover had an ACC-best 1.73 ERA in ACC regular-season games as well.

Sophomore righty Daniel Gossett is 9-3 with a 2.20 ERA, .209 opponents’ batting average, and 83 strikeouts in 86.0 innings pitched. Scott Firth has a 2.56 ERA and four saves, while Matt Campbell has a team-high seven saves.

Clemson will travel to Durham, NC to play in the ACC Tournament at Durham Bulls Athletic Park. The Tigers will be the #5 seed and face #4-seeded N.C. State on Wednesday at 7:00 PM, #1-seeded North Carolina on Friday at 7:00 PM, and #8-seeded Miami (FL) on Saturday at 3:00 PM in its bracket. All three games will be televised by RSN.