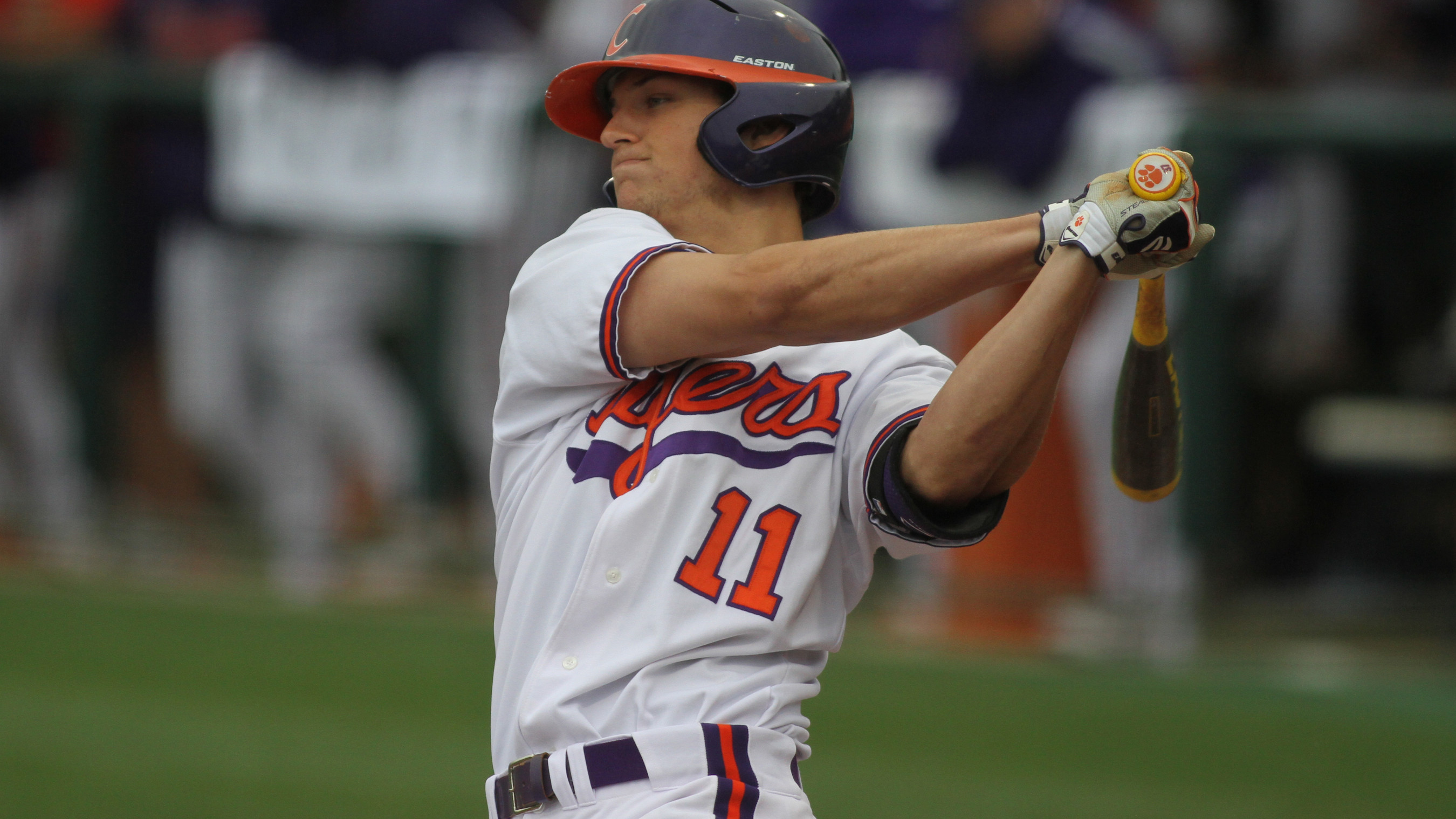 Last Week’s Game Notes & RecapsClemson, ranked as high as #15 in the nation, went 7-0 in seven games this past week. It marked the first time since 1994 that Clemson won seven games in a seven-day stretch. Clemson finished the Maryland series on Monday with a doubleheader sweep at home, then the Tigers swept Furman in a doubleheader at Fluor Field in Greenville, SC on Wednesday. Then over the weekend, Clemson swept Georgia Southern in a three-game series at home.

On the week, the Tigers outscored the opposition 63-18 and batted .349 with a .432 slugging percentage and .460 on-base percentage. They also totaled 10 doubles, three triples, one homer, 44 walks and eight hit-by-pitches against only 36 strikeouts, and 20 stolen bases. Clemson fielded at a .972 clip as well.

The Tiger pitching staff had a 1.57 ERA and .220 opponents’ batting average on the week. The staff also allowed 50 hits and 24 walks with 48 strikeouts in 63.0 innings pitched.

Clemson won the final two games against Maryland at Doug Kingsmore Stadium on May 6 to win the series 2-1. Both teams scored 14 runs in the series, while the Terrapins outhit the Tigers .288 to .236. McGibbon led the Tigers by going 3-for-7 (.429) with three RBIs, while Kennedy and Wilkerson both totaled four hits in the series. The Tiger pitching staff had a 2.67 ERA and 17 strikeouts against eight walks.

In game-two on May 6, which was the first game of a doubleheader, Scott Firth struck out two batters with the bases loaded in the ninth inning to preserve Clemson’s 3-2 win over Maryland. The Tigers scored two runs in the sixth inning to take a 3-1 lead, then Maryland scored a run in the eighth inning to cut Clemson’s lead in half. But Firth worked out of a jam in the ninth inning to record the save, while Erwin earned the victory in his first career ACC start by allowing only one run on five hits in 6.0 innings pitched. Wilkerson and McGibbon both had two hits to lead the Tigers, who were outhit 10-5.

In game-three on May 6, which was the second game of a doubleheader, Clemson scored four runs in the first inning on its way to a 9-5 win over Maryland. The Tigers scored a run in the sixth inning to build an 8-0 lead before Maryland took advantage of two Tiger errors to score five runs in the seventh inning. But Matt Campbell pitched 2.0 scoreless innings to record the save. Crownover pitched 6.0 scoreless innings of four-hit ball to earn the victory. Five different Tigers had two hits apiece to lead Clemson’s 12-hit attack.

Clemson swept Furman in a doubleheader by a combined score of 26-4 at Fluor Field on May 8. The Tigers outhit the Paladins .389 to .197 and totaled 28 hits, 18 walks, three hit-by-pitches, a .516 on-base percentage, and 12 steals. McGibbon went 5-for-6 with a double, four RBIs, five runs, two walks, and one steal. Wilkerson went 5-for-8 with a double, triple, five RBIs, two runs, and four walks. Kennedy went 4-for-7 with a homer, two RBIs, four runs, one walk, and four steals. Brittle, Maleeke Gibson, and Steven Duggar also added four hits apiece. The Tiger pitching staff had an 0.50 ERA and allowed just one earned run and 13 hits with 15 strikeouts.

In game-one on May 8, which was the first game of a doubleheader, Clemson scored six runs in the seventh inning on its way to a 14-2 win over Furman. The Tigers outhit the Paladins 14-2 and were led by Wilkerson, who went 3-for-4 with a double, triple, four RBIs, and two walks. Kennedy and Brittle added three hits apiece, while Gibson and Duggar totaled three RBIs apiece. In his first career start away from home, Brody Koerner allowed just one hit and no runs with seven strikeouts in 6.0 innings pitched to earn the victory.

In game-two on May 8, which was the second game of a doubleheader, Clemson broke open a close game with four runs in the sixth inning in its 12-2 win over Furman. McGibbon went 4-for-4 with three RBIs and two runs in Clemson’s 14-hit attack. Kennedy added a solo homer, three runs, and three of the Tigers’ seven steals in the game. Kyle Schnell pitched 2.1 perfect innings in relief with two strikeouts to earn the win. Schnell and Jackson Campana combined to hold Furman hitless and scoreless over the last four innings.

Clemson swept Georgia Southern by a combined score of 25-7 at Doug Kingsmore Stadium from May 10-12. The Tigers outhit the Eagles .357 to .204 and totaled four doubles, one triple, 17 walks against only 16 strikeouts, and seven stolen bases. Garrett Boulware went 6-for-10 with four RBIs and five runs, while Kennedy went 5-for-10 with a triple, three RBIs, three runs, and two walks. The Tiger pitching staff had a 2.00 ERA and 24 strikeouts, while the Clemson defense committed just one error in the series.

In game-one on May 10, Daniel Gossett struck out 12 batters to lead Clemson to a 7-1 win over Georgia Southern. In 7.1 innings pitched, Gossett allowed just two hits, one run, and two walks with 12 strikeouts to earn the victory. Three Tiger relievers combined to pitch 1.2 scoreless innings to close out the game. Clemson scored three runs in the fourth inning to take a 4-0 lead and cruised the rest of the way. Boulware and Mike Triller both went 2-for-3 with two RBIs, while Kennedy went 2-for-2 with two of Clemson’s nine walks in the game.

In game-two on May 11, Crownover, Patrick Andrews, and Campana combined on a four-hit shutout in Clemson’s 7-0 win over Georgia Southern. Crownover allowed just three hits, no runs, and three walks with eight strikeouts in 7.0 innings pitched to earn the win, then Andrews and Campana each pitched a scoreless inning to close out the game. No Eagle baserunner advanced past second base in the game. Duggar went 3-for-4 to lead Clemson’s 12-hit attack, while Boulware, Kennedy, and Tyler Krieger added two hits apiece.

In game-three on May 12, Clemson pounded out 14 hits in its 11-6 win over Georgia Southern. The Tigers scored five runs in the second inning to take a 5-1 lead and never looked back. Five different Tigers had two hits apiece, as Gibson went 2-for-4 with a double, two RBIs, and two runs. Krieger went 2-for-4 with two RBIs as well. Tiger batters combined to walk five times against only two walks. Erwin tossed 5.0 innings to earn the win, then four Tiger relievers each pitched an inning to close out the game.

2013 Season NotesClemson has a 37-15 overall record and 17-10 ACC mark on the season. Thanks to its current seven-game winning streak, Clemson has won 21 of its last 25 games after starting the season 16-11.

Freshman lefthander Matthew Crownover leads the staff with a 7-1 record and 1.90 ERA in 61.2 innings pitched over 13 appearances (12 starts). Sophomore righty Daniel Gossett is 8-3 with a 2.36 ERA and 80 strikeouts in 80.0 innings pitched. Scott Firth has a 2.48 ERA and four saves, while Matt Campbell has a team-high seven saves.

The Tigers will conclude their regular-season schedule with four games next week. Clemson will play its final regular-season home game on Tuesday night against USC Upstate, then the Tigers will travel to Tallahassee, FL to take on Florida State in a three-game series from Thursday to Saturday.