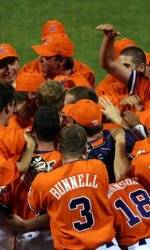 Notes Coming off five days off for final exams, the #17 Tigers won two of three games over Boston College at Doug Kingsmore Stadium on May 5,6 in the first-ever meetings between the two at Clemson. The three games were decided by a total of four runs, as each team scored 17 runs in the series. Boston College outhit the Tigers .314 to .276, but Clemson hit six home runs. Marquez Smith was 6-for-11 (.545) with two doubles, three homers, and eight RBIs in the series, while Addison Johnson was 5-for-11 (.455). The Tiger pitching staff had a 5.33 ERA and 26 strikeouts as well.

In game-one on May 5, Andy D’Alessio’s leadoff home run in the eighth inning lifted Clemson to a 4-3 win over Boston College. The Tigers took a 2-0 lead in the fourth inning after the first two batters of the frame were retired. With Clemson ahead 3-1 after seven innings, Eric Campbell’s two-out, two-run single in the eighth inning tied the score. But D’Alessio hit the first pitch of the bottom of the eighth inning over the fence in left-center to give the Tigers the lead for good. Stephen Clyne pitched the final 1.2 innings with four strikeouts to pick up the win. Clemson, who outhit Boston College 10-6, was led at the plate by Ben Paulsen’s 3-for-3 performance. Johnson added two hits and two RBIs as well.

In game-three in the second game of a doubleheader on May 6, Smith hit two homers to lead Clemson to a 7-6 come-from-behind win over Boston College. The Tigers took a 3-0 lead in the third inning, highlighted by Smith’s two-run homer. But the Eagles scored three runs in the fourth inning and three runs in the fifth, capped by Jared McGuire’s two-run homer. But after the first two batters in the bottom of the seventh inning were retired, the Tigers loaded the bases. Smith then blasted a grand slam to center to give the Tigers lead for good. Smith was 3-for-4 with two homers, a double, and six RBIs. Matt Vaughn pitched 4.2 scoreless innings of two-hit ball with four strikeouts in relief to earn the win.

Clemson will play five games this upcoming week, four of which will be away from home. On Tuesday night, Clemson will face Wofford at West End Field in Greenville, SC, then play host to Furman on Wednesday night. Over the weekend, the Tigers will travel to Tallahassee, FL to take on a 42-win Florida State team that has been ranked in the top five most of the season.