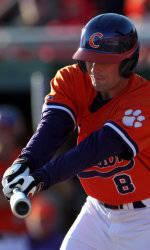 Notes Top-ranked Clemson opened the season by winning two of three games over George Mason at home from February 16-18. Clemson defeated the Patriots 14-0 in the opener, lost 5-1 in the second game, and rallied to win game-three 5-4, therefore the Tigers outscored George Mason 20-9 in the series.

Tiger batters combined for a .272 batting average, while Clemson held the Patriots to a .194 batting average and outscored them 20-9. Chalk had five hits and walked three times, while Doug Hogan hit two home runs. Clemson’s pitching staff had a 2.67 ERA and struck out 27 batters against eight walks. The starting rotation of P.J. Zocchi, David Kopp, and Ryan Hinson combined to allow just one run in 15.0 innings pitched as well.

In game-one on February 16, Clemson totaled 20 hits on its way to a 14-0 victory over the Patriots. It was the most runs by a Tiger team in a season-opener since 1989. Every Tiger starter had at least one hit, while Chalk, Taylor Harbin, and Hogan had three hits apiece. Hogan added two solo home runs and three RBIs. Clemson’s eight-run seventh inning put the game out of reach. Zocchi pitched 6.0 innings, allowing one hit, no runs, and no walks with six strikeouts to earn the victory. George Mason managed just two hits and committed four errors.

In game-two on February 17, Jason Bour hit a three-run homer in the sixth inning to give George Mason the lead for good in its 5-1 victory over the Tigers. After Kopp pitched 5.0 scoreless innings, George Mason scored four runs in the sixth inning off two Tiger relievers. Clemson, who saw its 17-game home winning streak come to an end, totaled just two hits, while it committed three errors and threw six wild pitches. Lefthander Mike Modica pitched 6.0 innings, allowing one hit and one run to earn the victory. Brad Chalk 17-game hitting streak also came to an end, as he was 0-for-2 with two walks.

In game-three on February 18, Clemson rallied from a 4-2 deficit to defeat George Mason 5-4. The Patriots scored three runs in the fifth inning, but Marquez Smith hit a two-out, two-run homer in the seventh inning to tie the score. After getting out of a jam in the top of the eighth inning, the Tigers plated the go-ahead run in the bottom of the eighth when Harbin’s sharp grounder to third was booted by Ryan Uphouse, allowing Hogan to score. The Patriots outhit the Tigers 8-6, but George Mason pitchers allowed nine walks. Daniel Moskos pitched the final 1.2 innings without allowing a hit or run to pick up the win. Clemson also stole four bases, but left 11 runners on base.

The Tigers will play a midweek home game versus High Point before playing host to Pacific during the weekend for a three-game set. Clemson has never faced Pacific on the diamond.