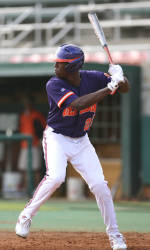 Clemson vs. High Point Clemson (3-0), ranked as high as #13 in the nation, will play host to High Point (3-1) on Wednesday afternoon at Doug Kingsmore Stadium. First pitch is scheduled for 4:00 PM. The game will be broadcast live on the radio by WCCP (104.9 FM) out of Clemson and can be heard live on the internet at WCCPFM.com. Live stats will also be available at ClemsonTigers.com.

The Series Clemson and High Point have met eight times on the diamond, with the Tigers holding an 8-0 lead in the series dating back to the 1976 season. The two teams played the first seven games between the 1976 and 1979 seasons, with six of those seven games at Doug Kingsmore Stadium.

In 2007, the two teams played after a 27-year layoff, as the Tigers were victorious 11-3 behind a homer, three runs scored, and two RBIs by Ben Paulsen. The Tigers trailed 2-0 before scoring six runs in the third inning to take control of the game. The game was shortened to six innings after heavy fog covered the field.

Clemson has outscored the Panthers by a combined score of 52-11 in the eight-game series. The Tigers also lead 7-0 in games played at Doug Kingsmore Stadium. Tiger Head Coach Jack Leggett is 1-0 against the Panthers as well.

The Starting Pitchers High Point will start junior righthander Zach Scott (0-0, 0.00 ERA) on the mound. The Conneautville, PA native made one relief appearance against Penn State and pitched 3.0 innings. He allowed one hit, no runs, and no walks with one strikeout.

The Tigers will counter with freshman lefthander Craig Gullickson. The Palm Beach Gardens, FL native made his first career appearance against Mercer on Sunday. He pitched a perfect inning out of the bullpen and struck out a batter in that outing.

The Panthers High Point, led by seventh-year Head Coach Sal Bando, Jr., enters Wednesday’s game against Clemson with a 3-1 overall record after defeating Campbell 20-13 on Tuesday. High Point totaled 22 hits and scored in seven of the eight innings in which it batted. The Panthers also won two of three games from Penn State over the weekend. Wednesday’s game will mark High Point’s first road game in 2008.

The Panthers are hitting .355 with a .433 on-base percentage and have stolen 10 bases. In four games, the Panthers have scored 43 runs (10.8 per game) and totaled 55 hits. Randy Schwartz is hitting a team-high .647 (11-for-17) with seven runs scored, three doubles, a triple, two homers, and six RBIs in four games. Pablo Rosario is batting .500 (8-for-16) and Chris Norwood has a team-best seven RBIs. Robby Kuzdale leads the team in stolen bases with four as well.

The pitching staff has a 4.75 ERA and .265 opponents’ batting average. Righthander Jamie Serber is one of the top Panthers out of the bullpen, as he has allowed one hit, no runs, and one walk with three strikeouts in 4.0 innings pitched over two relief appearances. Lefthander R.J. Chlebnikow has the team’s lone save. High Point is fielding at a .974 clip as well.

The Tigers Clemson enters Wednesday’s game against High Point with a 3-0 record after sweeping Mercer by a combined score of 28-13 last weekend at Doug Kingsmore Stadium.

The team is hitting .350 with a .425 on-base. Freshman Chris Epps is hitting a team-best .600 with a homer and four RBIs. Doug Hogan, who is riding an 18-game hitting streak, is hitting .455 with three doubles, a homer, and three RBIs. Wilson Boyd has hit three homers with six RBIs as well.

Centerfielder Addison Johnson did not play in the Mercer series due to a sore hamstring. His status will be re-evaluated on Wednesday.

The pitching staff has a 4.00 ERA and .238 opponents’ batting average. Twelve Tigers made an appearance on the mound in the Mercer series, six of which made their debut in a Tiger uniform. The Tigers are fielding at a .991 clip as well.

Worth Noting  Clemson used 12 pitchers in the Mercer series, six of which made their debut in a Tiger uniform.

Polls Clemson jumped four spots to #19 in the Baseball America poll on Monday after sweeping Mercer in three games over the weekend. Clemson also stayed at #13 in the Collegiate Baseball poll. There will not be another Sports Weekly poll released until next week, as Clemson was ranked #16 in its preseason poll.

Widmann Makes Triumphant Return Junior shortstop Stan Widmann (Hurst, TX) has overcome a serious neck injury that forced him to miss all but six games in 2007. He is healthy for 2008 and made a successful return to the lineup against Mercer last weekend. He was 4-for-11 (.364) with three runs scored as the leadoff batter and did not commit an error in 11 chances in the field.

The fact that he can return at all is a testament to the outstanding physical condition Widmann was in when he suffered the injury. He was forced to wear a halo for months. Head Coach Jack Leggett can relate, as he also suffered a serious neck injury and had to wear a halo after a skiing accident in 1999.

In the series-finale, Boyd highlighted a nine-run third inning in the Tigers’ 10-3 win. In the frame, he hit a one-out, solo homer to right field. Later in the inning, he hit a two-out, three-run homer to right field to cap the scoring. It was just the fourth time in school history that a Tiger hit two home runs in an inning. The other three occurrences all came against Maryland, including Brooks Shumake (1982), Chuck Baldwin (1986), and Kyle Frank (2003).

Epps Steps Up Early Freshman outfielder Chris Epps (Stone Mountain, GA) made an instant impact in his first collegiate series against Mercer on February 23,24. In three games, he was 6-for-10 (.600) with five runs scored, a homer, four RBIs, and three walks to help the Tigers to a sweep of the Bears.

Stoneburner’s Long Wait Over Red-shirt freshman righty Graham Stoneburner (Richmond, VA) had to wait quite a while to make his debut on the mound. After missing his senior season at Mills E. Godwin High School due to injury, he suffered a torn ACL just prior to the 2007 season at Clemson.

After receiving a medical red-shirt in 2007, he started on the mound against Mercer on February 24 and pitched 5.0 scoreless innings of three-hit ball (all singles) to earn the victory. Stoneburner also allowed only one walk with three strikeouts.

Tigers Open Season With Sweep of Mercer Clemson, ranked #13 in the country, swept Mercer in a three-game series at Doug Kingsmore Stadium on February 23,24. The Tigers outscored the Bears 28-13, as 16 of Clemson’s runs came in the third inning. Clemson hit .350 against Mercer’s .238 batting average and walked 14 times while striking out just 10 times. Chris Epps went 6-for-10 to lead the Tigers, while Doug Hogan added five hits, including three doubles and a homer, as well. Clemson played outstanding defense, committing just one error, and had a 4.00 ERA in the series.

In game-one on February 23, which was the first game of a doubleheader, Clemson totaled 16 hits and broke open the game with five runs in the third inning en route to a 12-5 victory over the Bears. Doug Hogan, and Epps all had three hits apiece, while Stan Widmann added two hits and two runs scored after missing all but six games the year before due to a serious neck injury. Starter Ryan Hinson picked up the win, as he allowed two runs on five hits in 5.0 innings pitched.

In game-two on February 23, which was the second game of a doubleheader, the Tigers scored a combined six runs in the second and third innings and held on for a 6-5 win over Mercer. The Bears took a 3-0 lead in the top of the second inning only to see the Tigers respond with four runs in the bottom of the second inning, highlighted by Hogan’s bunt single and subsequent throwing error that scored two runs. Epps added a two-run homer in the third inning, his first at Clemson, giving him a hit in each of his first five at-bats as a Tiger. The Bears scored a run in the ninth inning, but they could get no closer. Starter D.J. Mitchell earned the win, as he allowed just three hits and three runs in 5.0 innings pitched. Matt Vaughn also earned the save.

In game-three on February 24, Clemson scored nine runs in the third inning and cruised to a 10-3 win over Mercer to sweep the series. Boyd hit a solo homer and three-run homer in the frame to become just the fourth Tiger in history to hit two long balls in an inning. The first batter of the third inning was retired before Clemson broke the game open with nine runs on eight hits. Graham Stoneburner pitched 5.0 scoreless innings of three-hit ball to earn the win in his first outing as a Tiger.