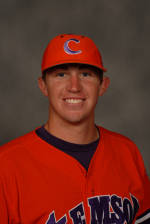 Clemson Baseball to Open Season at Home Against Mercer this Weekend

Clemson vs. Mercer Clemson (0-0), ranked as high as #13 in the nation, will open its 2008 schedule when it plays host to Mercer (0-0) this weekend in a three-game series at Doug Kingsmore Stadium. Game times are 1:00 PM (Saturday) for a doubleheader and 1:00 PM (Sunday). All three games will be broadcast live on the radio by WCCP (104.9 FM) out of Clemson and can be heard live on the internet at WCCPFM.com. Live stats will also be available at ClemsonTigers.com for all three games.

The Series Clemson and Mercer have met 32 times on the diamond, with the Tigers holding a 17-14-1 lead in the series dating back to 1901. The two teams last played a weekend series at Doug Kingsmore Stadium from February 24-26, 2006, as the Tigers won two of the three games. Clemson won game-one 5-1, while Mercer won game-two 3-2. The Tigers responded with a 9-4 victory in the series-finale, which was the second game of a doubleheader.

Prior to the 2006 contests, the most-recent matchups came in 1978, as the Bears swept both seven-inning games of a doubleheader at Macon, GA on April 4. In 1977, Clemson won both meetings at Doug Kingsmore Stadium. The first 21 games in the series were played between 1901 and 1928.

The Tigers lead 7-1 in games at Clemson and 6-1 at Doug Kingsmore Stadium. Tiger Head Coach Jack Leggett is 2-1 against the Bears as well.

The Starting Pitchers In game-one, Mercer will start senior righthander Boone Webster on the mound. The Alpharetta, GA native had a 7-5 record and 4.15 ERA in 14 starts and five relief appearances over 86.2 innings pitched in 2007. He also struck out 56 against 41 walks.

The Tigers will counter with junior lefthander Ryan Hinson. The Rock Hill, SC native had a 6-2 record and 2.74 ERA in 14 starts and five relief appearances over 82.0 innings pitched in 2007. He struck out 60 against 39 walks as well.

In game-two, the Bears will send out senior righty Justin Boyette on the mound. The Pensacola, FL native had a 4-4 record and 4.84 ERA in 12 starts and three relief appearances over 70.2 innings pitched in 2007. He allowed just 14 walks, less than 1.8 per nine innings pitched, and struck out 54 batters.

The Tigers will counter with junior righthander D.J. Mitchell. The Rural Hall, NC native had a 5-0 record and 3.27 ERA in seven starts and eight relief appearances over 52.1 innings pitched in 2007. He also struck out 49 against only 16 walks.

Clemson will counter with freshman righty Graham Stoneburner on Sunday. The Richmond, VA native red-shirted a season ago after suffering a torn ACL during the preseason. He will be making his first appearance as a Tiger.

The Bears Mercer is led by fifth-year Head Coach Craig Gibson and has yet to play a game in 2008. The Bears are coming off a 33-25 season, which included a 17-10 mark (second place) in the Atlantic Sun Conference. They also return seven starters in the field and their top-two starting pitchers each amassed over 70 innings pitched on the mound in 2007.

The Tigers Clemson enters the season-opening series against Mercer ranked as high as #13 in the nation by Collegiate Baseball. The Tigers are coming off a 41-23 season in 2007 when they played in the NCAA Tournament for the 21st consecutive season, the third-longest streak in NCAA history.

Clemson’s probable starting lineup in the field features only one player who ended the 2007 season at the same position (Doug Hogan at catcher). Several other Tiger starters return, but they are slated to start at different positions against Mercer.

Worth Noting  Clemson is scheduled to play only 31 home games in 2008, its lowest total since 1993 when it also played 31 home games.

Behind Florida State and Clemson in the ACC Atlantic Division were N.C. State, Wake Forest, Boston College, and Maryland.

Leggett Leading a Consistent Winner Head Coach Jack Leggett has a 649-282 (.697) record at Clemson in his 15th season. The legendary Bill Wilhelm has the most wins of any Tiger coach with 1,161 in 36 seasons (1958-93) at Clemson. Leggett’s 649 wins are second-most in school history. No other Clemson coach has more than 70 wins while in Tigertown.

Through Leggett’s first 14 seasons at Clemson, he had 649 wins. Only three other programs (Florida State, Wichita State, Rice) had more wins over that span from 1994-07. Furthermore, he has led the Tigers to at least 39 wins every year he has been at the helm of the program. Clemson along with Florida State and Wichita State are the only three programs in the nation to win at least 39 games every year since 1994.

Widmann Streaking on the Basepaths Junior shortstop Stan Widmann (Hurst, TX) has overcome a serious neck injury that forced him to miss all but six games in 2007. He is healthy for 2008 and should be back to his early 2007 form when he was 9-for-22 (.409) with three stolen bases.

The fact that he can return at all is a testament to the outstanding physical condition Widmann was in when he suffered the injury. He was forced to wear a halo for months. Head Coach Jack Leggett can relate, as he also suffered a serious neck injury and had to wear a halo after a skiing accident in 1999.

Preseason Honors Several Tigers received accolades in the preseason, including nine players by Baseball America. Doug Hogan is on the watch list for the Golden Spikes Award, and he also is a preseason third-team All-American by Collegiate Baseball.

Hogan was tabbed as the #17 senior in the nation by Baseball America. Juniors D.J. Mitchell (#45) and Addison Johnson was listed as the #25 sophomore in the country.

Four Tiger freshmen were listed among the top-50 in their class, including Graham Stoneburner (#14), Josh Thrailkill (#27) (he is listed as a red-shirt freshman by Baseball America but is actually a sophomore), Jeff Schaus (#42), and Trent Rothlin (#46).