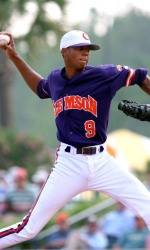 The Series Clemson and Miami (FL) have met 46 times on the diamond, with the Hurricanes holding a 23-22-1 lead in the series dating back to the 1977 season. Last year, the two teams split four games.

In the three-game series at Doug Kingsmore Stadium in 2007, the Hurricanes won the first and last games by scores of 10-3 and 7-6, respectively. The Tigers won game-two of the series by a score of 4-1. The two teams also faced off in the ACC Tournament, as the Tigers won 5-4 on Alex Lee’s suicide squeeze bunt in the 13th inning.

Two years ago at Mark Light Field, the Tigers swept the Hurricanes in three games by scores of 8-6, 6-2, and 14-1. In 2005, Clemson won all four meetings, meaning the Tigers hold a 9-2 lead in the series since Miami joined the ACC prior to the 2005 season.

The Hurricanes hold an 11-9-1 lead in games played at Coral Gables, while the Tigers have a 7-2 record against Miami in ACC regular-season games.

The Starting Pitchers In game-one, Miami (FL) will start freshman lefthander Chris Hernandez (4-0, 2.06 ERA) on the mound. The Miami, FL native has made six starts for a total of 39.1 innings pitched. He has allowed 22 hits (.159 opponents’ batting average), including 19 singles and three doubles and eight walks with 38 strikeouts.

The Tigers will counter with junior righthander D.J. Mitchell (3-2, 2.55 ERA) on Friday. The Rural Hall, NC native has made six starts and three relief appearances for a total of 42.1 innings pitched. He has yielded 38 hits (.241 opponents’ batting average) and 18 walks with 39 strikeouts.

In game-two, the Hurricanes will send out senior righthander Enrique Garcia (1-0, 5.24 ERA) on the mound. The Mechanicsville, MD native has made five starts and one relief appearance for a total of 22.1 innings pitched. He has yielded 23 hits (.277 opponents’ batting average) and 11 walks with 22 strikeouts.

Clemson will counter with freshman righthander Graham Stoneburner (4-0, 2.31 ERA) on Saturday. The Richmond, VA native has made six starts and one relief appearance for a total of 35.0 innings pitched. He has allowed 24 hits (.194 opponents’ batting average) and five walks with 28 strikeouts.

The Hurricanes have yet to determine their starter for game-three.

The Tigers will start junior lefthander Ryan Hinson (2-3, 4.62 ERA) on Sunday. The Rock Hill, SC native has made six starts and two relief appearances for a total of 37.0 innings pitched. He has allowed 43 hits (.291 opponents’ batting average) and nine walks with 37 strikeouts.

The Hurricanes Miami (FL), led by 15th-year Head Coach Jim Morris, enters the series against Clemson with a 23-2 overall record and 9-1 ACC mark after winning midweek games against Florida Atlantic (16-7) and Florida International (13-2). The Hurricanes are also coming off two wins in two games at Duke over the weekend.

Miami, who has failed to score six runs in only three games this season, is averaging 9.8 runs per game and hitting .344 with a .443 on-base percentage and .573 slugging percentage thanks to 61 doubles, 11 triples, and 39 homers in 25 games. The team has also stole 56 bases in 68 attempts, while it has held opponents to just nine steals in 21 attempts.

Jemile Weeks is hitting a team-best .404 with seven doubles, three triples, six homers, 31 RBIs, and nine steals. Yonder Alonso is hitting .392 with five homers and 26 RBIs along with a .554 on-base percentage thanks to 31 walks, and Blake Tekotte is batting .386 with a .518 on-base percentage and team-high 14 steals. Dennis Raben, who earlier this season was hampered by injury, has totaled five doubles, four homers, and 18 RBIs in only 14 games. Eleven different Hurricanes have totaled at least two home runs apiece as well.

The pitching staff has a 3.45 ERA and .224 opponents’ batting average along with 223 strikeouts against 74 walks in 224.1 innings pitched. Righthander Kyle Bellamy is 3-0 in 12 relief appearances. He has allowed just five hits (.088 opponents’ batting average), no runs, and two walks with 23 strikeouts. Carlos Gutierrez also has six of Miami’s 10 saves. The Hurricanes are fielding at a .977 clip as well.

The Tigers Clemson enters the series at #2 Miami (FL) with an 18-10 overall record and 6-6 ACC mark after falling twice in two games against Georgia in a home-and-home, midweek series. The Tigers are also coming off two wins in three games at Maryland over the weekend. Clemson sports a 4-5 road record as well.

The Tigers are hitting .298 with a .382 on-base percentage. The team has totaled 30 stolen bases, including a team-high seven by Stan Widmann. Widmann has not started the last three games due to a shoulder injury. His status for the Miami series will be re-evaluated on Friday.

Kyle Parker leads the team with a .348 batting average along with five doubles, six homers, and 17 RBIs. Ben Paulsen is hitting .347 with nine doubles, eight homers, and 21 RBIs, while Doug Hogan has totaled 10 doubles, one triple, seven homers, and 30 RBIs.

The pitching staff has a 4.08 ERA and .258 opponents’ batting average. Righthander Matt Vaughn has struck out 19 against six walks in 16.0 innings pitched and has eight saves in 14 relief appearances. The Tigers are fielding at a .960 clip as well.

Georgia Sweeps Clemson in Midweek Series Georgia won both games of a home-and-home, midweek series on April 1,2. The Bulldogs outscored the Tigers 17-7 and outhit Clemson .301 to .153. Ben Paulsen led Clemson with two hits in five at-bats along with a two-run homer.

Georgia scored nine runs in the first four innings and cruised to an 11-3 win over Clemson at Foley Field on April 1. Every Bulldog starter had at least one hit, as Rich Poythress and Joey Lewis both hit a home run and double to lead Georgia’s 13-hit attack. Clemson committed four errors and totaled just four hits. The Tigers put 14 batters on base, but they could only plate three runs. Wilson Boyd provided Clemson’s offensive highlight with a two-run single in the sixth inning. Lefthander Alex McRee pitched 4.0 hitless and scoreless innings with seven strikeouts in a scheduled short start to earn the victory.

Georgia scored two runs with two outs in the seventh inning to defeat Clemson 6-4 at Doug Kingsmore Stadium on April 2. The Tigers trailed 2-0 before Matt Sanders hit a two-out, two-run single in the second inning. The following frame, Paulsen hit a two-run home run. But Adam Fuller hit a two-run homer in the fifth inning to tie the score. Then in the seventh inning, Bryce Massanari and Lyle Allen both hit two-out singles to score runs. Paulsen had two of Clemson’s five hits, while Fuller paced Georgia with two hits and two RBIs. Steve Esmonde, the third of six pitchers used by Georgia, pitched 2.0 scoreless innings in relief to pick up the victory.