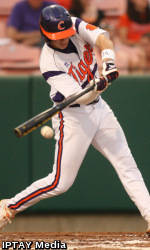 Clemson vs. Winthrop & Western Carolina Clemson (14-13) will host Winthrop (9-20) on Tuesday and Western Carolina (20-9 entering Tuesday’s game against #24 Georgia) on Wednesday at Doug Kingsmore Stadium. First pitch for both games is scheduled for 6:30 PM.

The Series (Winthrop) Clemson and Winthrop have met 21 times on the diamond, with the Tigers holding a 17-4 lead in the series that dates back to 1981.

The Series (Western Carolina) Clemson and Western Carolina have met 68 times on the diamond, with the Tigers leading 54-14 in the series dating back to the 1974 season. The two have played at least one game every year since 1978.

The Starting Pitchers (Winthrop) Winthrop will start freshman lefthander Josh Strong (0-1, 11.30 ERA) on the mound. The Orlando, FL native has made six relief appearances and one start for a total of 14.1 innings pitched. He has allowed 25 hits (.379 opponents’ batting average) and nine walks with nine strikeouts.

The Tigers will counter with freshman righty Daniel Gossett (2-2, 6.75 ERA) on Tuesday. The Lyman, SC native has made five relief appearances and three starts for a total of 20.0 innings pitched. He has surrendered 21 hits (.269 opponents’ batting average) and 10 walks with 22 strikeouts.

The Tigers will start junior righthander Jonathan Meyer (1-2, 3.51 ERA) on Wednesday night. The San Diego, CA native has made 10 relief appearances and two starts for a total of 25.2 innings pitched. He has given up 31 hits (.287 opponents’ batting average) and three walks with 22 strikeouts.

The Eagles Winthrop, led by second-year Head Coach Tom Riginos, enters Tuesday’s game at Clemson with a 9-20 overall record and a 2-4 Big South Conference mark after winning two of three games at Gardner-Webb over the weekend. The Eagles are also 2-6 on opponents’ home fields.

Winthrop is averaging 3.4 runs per game and hitting .212 with a .282 slugging percentage and .292 on-base percentage thanks to 83 walks and 23 hit-by-pitches against 204 strikeouts. The team has also totaled 36 doubles, two triples, eight home runs, and 21 stolen bases in 27 attempts.

Max Vogel leads the team with a .286 batting average, while Justin Hopper is second at .266. Patrick Gamblin has a team-high three homers along with a team-best nine steals in 10 attempts. Jason Driver is hitting just .214, but he is riding a current 16-game hitting streak and has reached base safely in 22 consecutive games.

The pitching staff has a 4.97 ERA and .288 opponents’ batting average along with 210 strikeouts against 100 walks in 257.0 innings pitched. Senior righthander Austin Stuart and freshman righty Preston Johnson both have two saves, while Stuart has 23 strikeouts against only six walks in 19.2 innings pitched over 13 relief appearances. Winthrop, who has allowed 52 steals in 61 attempts, is fielding at a .960 clip as well.

The Catamounts Western Carolina, led by fifth-year Head Coach Bobby Moranda, enters Tuesday’s game against #24 Georgia with a 20-9 overall record and 6-3 SoCon mark after winning two of three games at home against Davidson over the weekend. The Catamounts, who are 5-0 in one-run games, are 6-4 on opponents’ home fields in 2012.

Western Carolina is averaging 7.1 runs per game and hitting .322 with a .448 slugging percentage and .404 on-base percentage thanks to 128 walks and 27 hit-by-pitches against 164 strikeouts. The team has also totaled 65 doubles, four triples, 19 home runs, and 47 stolen bases in 63 attempts.

The pitching staff has a 3.63 ERA and .240 opponents’ batting average along with 227 strikeouts against 132 walks in 262.2 innings pitched. Junior righthander Preston Hatcher has five of the team’s seven saves along with a 5-0 record, 1.00 ERA, .183 opponents’ batting average, and 27 strikeouts in 27.0 innings pitched over 15 relief appearances. Western Carolina, who has allowed 19 steals in 30 attempts, is fielding at a .964 clip as well.

The Tigers Clemson enters Tuesday’s game against Winthrop with a 14-13 overall record and 5-7 ACC mark after defeating #7 Miami (FL) twice in three games at home over the weekend. The Tigers, who are 10-3 when outhitting their opponents, are 12-7 at home in 2012.

Steve Wilkerson is riding a 15-game hitting streak and leads the team with a .390 batting average along with a team-high five steals. Richie Shaffer is batting .319 with six homers, 11 doubles, one triple, and 24 RBIs, while Phil Pohl is hitting .323 with four long balls and a team-high 26 RBIs.

The pitching staff has a 3.46 ERA and .263 opponents’ batting average in 242.0 innings pitched. The staff has allowed 98 walks against 212 strikeouts, good for a 2.16 strikeout-to-walk ratio. Sophomore righthander Matt Campbell has a team-high two saves along with a 2.14 ERA in 21.0 innings pitched over 11 relief appearances. The Tigers are fielding at a .966 clip as well.

Shaffer at His Best Against the SECRichie Shaffer has performed at his best against some of the best teams in the country this season. The Tigers are 2-2 in their four games against SEC teams this season, which includes three games against #2 South Carolina and one game at #18 Georgia. Shaffer is the main reason for the Tigers’ two wins in those games.

In his four games against SEC teams, he is 9-for-15 (.600) with four doubles, three homers, seven RBIs, eight runs, six walks against only one strikeout, a .714 on-base percentage, and a 1.467 slugging percentage.

Shaffer went 6-for-9 with two homers, two doubles, four RBIs, six runs, and six walks in three games against the Gamecocks, then he went 3-for-6 with two doubles, one homer, and three RBIs in Clemson’s 10-5 win at Georgia on March 27.