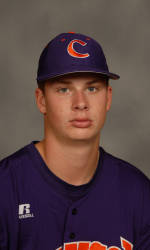 Clemson vs. UNC Asheville Clemson (4-2), ranked as high as #19 in the nation, will host UNC Asheville (2-6) on Wednesday afternoon at Doug Kingsmore Stadium. First pitch is scheduled for 4:00 PM. The game will be broadcast live on the radio by WCCP (104.9 FM) out of Clemson and can be heard live on the internet at ClemsonTigers.com.

The Series Clemson and UNC Asheville have met three times on the diamond, with Clemson winning all three games at home in the series that started in 1998. Clemson won regular-season games in 1998 (14-6) and 2002 (23-5). In the 2006 Clemson Regional, the Tigers downed the Bulldogs 3-0. Jack Leggett is 3-0 against the Bulldogs as Clemson’s head coach and was 14-2 versus UNC Asheville as Western Carolina’s head coach, meaning he is 17-2 all-time against the Bulldogs.

The Starting Pitchers UNC Asheville will start sophomore righthander Taylor Wohlwend (1-2, 5.25 ERA) on the mound. The La Mesa, CA native has made two starts and one relief appearance for a total of 12.0 innings pitched. He has given up 12 hits (.267 opponents’ batting average) and eight walks with 16 strikeouts.

The Tigers will counter with freshman righthander Kevin Brady (0-0, 1.50 ERA) on Wednesday. The Gaithersburg, MD native has made one start and one relief appearance for a total of 6.0 innings pitched. He has allowed seven hits (.292 opponents’ batting average) and one walk with three strikeouts.

The Bulldogs UNC Asheville, led by fifth-year Head Coach Willie Stewart, enters Wednesday’s game with a 2-6 record after winning two of three games against Central Michigan at home over the weekend. The Bulldogs are 0-2 on opponents’ home fields this season, losses at Wofford (13-4) and Furman (5-3) in February.

The Bulldogs are averaging 4.9 runs per game and hitting .279 along with a .359 slugging percentage and .332 on-base percentage. The team has totaled 14 doubles, one triple, two homers, 21 walks against 62 strikeouts, and three stolen bases.

Reed Kreiser is hitting a team-best .387 with two doubles, two homers, and eight RBIs, while Catlin Carter is hitting .382.

The pitching staff has a 6.85 ERA and .315 opponents’ batting average along with 61 strikeouts against 47 walks in 67.0 innings pitched. Justin Schumer has the team’s lone save and Taylor Wohlwend had a team-high 16 strikeouts in 12.0 innings pitched. UNC Asheville is fielding at a .925 clip as well.

The Tigers Clemson, ranked as high as #19 in the nation, enters Wednesday’s game with a 4-2 record after suffering a 4-2 defeat in 14 innings against Furman on Tuesday. All six of the Tigers’ previous games have been at home.

The Tigers are hitting .218 with a .325 slugging percentage and .339 on-base percentage. The team has totaled 15 stolen bases, including seven by Addison Johnson. Ben Paulsen, who is 9-for-18 in the last four games, is hitting .417 with one homer and four RBIs. Brad Miller has a team-high six RBIs.

The pitching staff has a 2.55 ERA and .215 opponents’ batting average. The staff has allowed just 11 walks against 64 strikeouts, good for a 5.8-to-1 strikeout-to-walk ratio. Casey Harman has 11 strikeouts against only one walk in 6.1 innings pitched. The team is fielding at a .988 clip as well.

Worth Noting  Clemson has a 34-11 advantage in walks over its opponents this season.  Due to illness, junior outfielder Wilson Boyd did not play against Furman on March 3, ending his streak of 68 consecutive starts. It was the longest active streak by a Tiger and dated back to the 2007 season.  Junior first-baseman Ben Paulsen has totaled three hits in three of the last four games and is hitting a team-best .417 this season.  Sophomore outfielder Jeff Schaus is hitting just .176, but he has an outstanding .440 on-base percentage thanks to eight walks.

Dwyer Effective as a Freshman Lefthander Chris Dwyer (Swampscott, MA) has made an immediate impact for the Tigers in 2009. The freshman, who will turn 21 on April 10, has made two starts and been near flawless in both. In 11.2 innings pitched, he has a 1-0 record and has allowed just two hits (.054 opponents’ batting average), no runs, and one walk with 12 strikeouts. He has already earned a starting spot in the weekend rotation and is a big reason Clemson’s strikeout-to-walk ratio is 5.8-to-1 this season.

Paladins Rally Past Tigers 4-2 in 14 Innings Furman scored two runs in the 14th inning to defeat #19 Clemson 4-2 at Doug Kingsmore Stadium on March 3. In the ninth inning, the Tigers were one strike away from pitching a no-hitter, but an infield single broke up the no-hit bid. On the next pitch, Brian Harrison blasted a two-run homer to tie the score. After Clemson squandered several opportunities in extra innings, Reese Wade’s RBI fielder’s choice in the 14th inning gave Furman the lead, then the Paladins added an insurance run. Both teams managed just six hits, while neither team committed an error. Ben Paulsen had a game-high three hits for the Tigers, who left 10 runners on base.