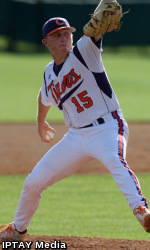 Game Promotions All current members of the Tiger Letterwinner’s Association are invited to attend the Tennessee Tech game on Tuesday. Each member will receive free admission by presenting their current membership card at the ticket gate next to the left-field foul pole. Additional tickets for family members can be purchased on Tuesday afternoon for only $6.

Clemson is also hosting Little League and Clemson Baseball Camper Day on Tuesday. Any Little Leaguer who wears their team baseball jersey or their team hat will receive a free general admission ticket, as well as any camper who wears their Clemson Baseball t-shirt. Tickets can be redeemed at the ticket booths at either the left-field entrance or the entrance behind home plate beginning at 12:30 PM.

The Series Clemson and Tennessee Tech have met four times on the diamond, with the Tigers holding a 4-0 lead in the series that dates back to 2003. All four meetings have taken place at Doug Kingsmore Stadium.

The two teams last met in the 2009 Clemson Regional. Jeff Schaus hit a two-run, walkoff double in the ninth inning to give Clemson a 5-4 win in both team’s opener of the regional. Two days later, Clemson eliminated the Golden Eagles with a 10-0 victory. The Tigers also won both midweek games over Tennessee Tech in March of 2003 by scores of 7-5 and 8-0.

The Starting Pitchers Tennessee Tech will start junior righthander Nick Price (2-0, 8.31 ERA) on the mound. The Clinton, TN native has made seven relief appearances and three starts for a total of 17.1 innings pitched. He has yielded 23 hits (.311 opponents’ batting average) and six walks with 15 strikeouts.

Clemson will counter with sophomore righty Mike Kent (1-1, 2.16 ERA) on Tuesday. The Springfield, VA native has made 16 relief appearances for a total of 33.1 innings pitched. He has surrendered 34 hits (.262 opponents’ batting average) and seven walks with 19 strikeouts.

The Golden Eagles Tennessee Tech, led by eighth-year Head Coach Matt Bragga, enters Tuesday’s game at Clemson with a 19-27 overall record and 9-12 Ohio Valley Conference mark after winning two of three games over Morehead State at home over the weekend. The Golden Eagles, who are 9-5 in one-run games, are 4-12 on opponents’ home fields in 2012.

Zach Stephens leads the team with a .404 batting average along with 12 doubles, 16 homers, 48 RBIs, and a .505 on-base percentage. Michael Morris is hitting .343 with 15 doubles, while James Abraham is batting .335 with 10 doubles and seven steals. Austin Wulf has added a team-high nine stolen bases as well.

The pitching staff has a 6.56 ERA and .304 opponents’ batting average along with 319 strikeouts against 203 walks in 406.0 innings pitched. Senior righthander Cullen Park has a team-high three saves. Tennessee Tech, who has allowed 41 steals in 58 attempts, is fielding at a .964 clip as well.

The Tigers Clemson enters Tuesday’s game against Tennessee Tech with a 28-20 overall record and 14-10 ACC mark after winning two of three games at home over College of Charleston from Saturday to Monday. The Tigers, who are 16-14 in day games, are 17-13 at home in 2012.

Richie Shaffer leads the team with a .346 batting average along with 15 doubles, two triples, eight homers, 40 RBIs, 47 walks, five steals, and a .480 on-base percentage. He has also reached base via a hit or walk in 26 consecutive games. Thomas Brittle is hitting .331 with six doubles, seven triples, two homers, 32 RBIs, and is riding a 21-game hitting streak. Steve Wilkerson, who is batting .322, is on a 10-game hitting streak as well.

Road Warriors Clemson may be struggling at home this season (17-13 record), but its record away from home has been a bright spot in 2012. The Tigers are 9-6 on opponents’ home fields and 2-1 in neutral-site games, meaning Clemson is 11-7 away from home. What makes that record even more remarkable is the fact that the Tigers lost their first three games and six of their first seven games away from home. Since suffering a sweep at Virginia from March 25-27, Clemson is 10-1 away from home, which included an eight-game winning streak.

Clemson began the season 0-3 in ACC road games. But since, the Tigers are 8-1 on the road in the ACC, which includes sweeps at Duke and Maryland along with a two wins in three games at Georgia Tech. That is the main reason that Clemson, who is 6-6 in ACC homes games, has a 14-10 ACC mark in 2012.

Clemson Takes Series 2-1 Over College of Charleston Clemson won two of three games over College of Charleston by a combined score of 18-10 at Doug Kingsmore Stadium from May 5-7. The Cougars outhit Clemson .236 to .225, but Clemson had a .358 on-base percentage compared to the Cougars’ .302 on-base percentage. Thomas Brittle led Clemson at the plate by going 5-for-13 (.385) with a triple, three RBIs, and three runs. The Tiger pitching staff had a 2.48 ERA and 22 strikeouts against only seven walks.

In game-one on May 5, Steve Wilkerson scored on a wild pitch in the 11th inning to give Clemson a 4-3 walkoff win over College of Charleston. The Tigers scored two runs on Jon McGibbon’s two-out single in the first inning. Clemson went hitless and scoreless from the third inning through the 10th inning. Daniel Aldrich’s third double of the game scored the go-ahead run in the top of the 11th inning. In the bottom of the 11th inning, Brad Felder blooped a one-out single and scored the tying run on Brittle’s two-out single to left field. Daniel Gossett struck out eight batters in 4.1 innings pitched to earn the victory.

In game-two on May 6, Clemson scored eight runs in the seventh inning to pull away for a 12-3 win over College of Charleston. The Tigers scored two runs in the fifth inning to take a 4-0 lead, then they plated eight runs on seven hits in the seventh inning to take a 12-0 lead. Brittle and Richie Shaffer had three hits apiece to pace Clemson’s 13-hit attack. Every Tiger starter scored at least one run as well. Kevin Pohle tossed 7.0 scoreless innings of six-hit ball with five strikeouts against only one walk to earn the win, while Clay Bates retired all six batters he faced to close out the game.

In game-three on May 7, College of Charleston scored two runs in the fourth inning to take the lead for good in its 4-2 win over Clemson. The win was the Cougars’ first in 24 all-time meetings against Clemson. The Tigers committed three costly errors that led to two unearned runs, which proved to be the difference in the game. Matt Pegler pitched 6.0 solid innings to earn the win, while Kyle Owings tossed 3.0 scoreless innings of one-hit ball to record the save. Wilkerson and Phil Pohl had two hits piece for Clemson, who were held to six hits in the contest.