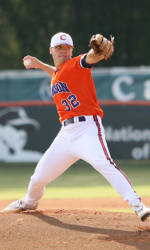 Clemson vs. South Carolina Clemson (4-0), ranked as high as #19 in the nation, will host South Carolina (3-0) on Saturday at Doug Kingsmore Stadium in the first of four scheduled meetings. First pitch for Saturday’s game is scheduled for 2:00 PM. The game will be shown live via webcast at ClemsonTigers.com as well.

On Sunday, Clemson and South Carolina will play again at the Gamecock’s new stadium (Carolina Stadium) at 1:30 PM. The two teams will also play two more times in April, including on April 8 at Clemson and April 22 at South Carolina.

The Series Clemson and South Carolina have met 283 times on the diamond, with Clemson holding a 163-118-2 lead in the series dating back to 1899. South Carolina is Clemson’s most-played rival in history.

In 2008, South Carolina won all four matchups. In 2007, South Carolina won the first three meetings before Clemson won the final matchup by a score of 14-5 at Doug Kingsmore Stadium. In the 2006 season, the Tigers won three of four meetings, while the two teams split the four-game season series in both the 2004 and 2005 seasons.

Saturday’s contest will mark the first time since 2003 that Clemson faces an unranked South Carolina squad. Each of the last 20 games in the series has featured a Gamecock team that has been ranked in the top 25 of at least one of the three major polls.

The Starting Pitchers South Carolina will start sophomore righty Sam Dyson (1-0, 0.00 ERA) on the mound. The Tampa, FL native has made one start for a total of 5.0 innings pitched. He has allowed one hit (.063 opponents’ batting average) and two walks with six strikeouts.

Clemson will counter with senior righthander Trey Delk (1-0, 1.69 ERA) on Saturday. The Elgin, SC native has made one start for a total of 5.1 innings pitched. He has allowed four hits (.211 opponents’ batting average) and one walk with five strikeouts.

The Gamecocks South Carolina, led by 13th-year Head Coach Ray Tanner, enters Saturday’s game with a 3-0 record after sweeping Duquesne at home over the weekend by a combined score of 27-4.

The Gamecocks are averaging 9.0 runs per game and hitting .313 with a .490 slugging percentage and .439 on-base perentage. The team has totaled five doubles, four homers, and 21 walks against only 17 strikeouts.

The pitching staff has a 1.33 ERA and .119 opponents’ batting average with 31 strikeouts against 15 walks in 27.0 innings pitched. The staff has also given up just 10 hits (eight singles, two doubles) and has not thrown a wild pitch. Senior lefthander Alex Farotto has the team’s lone save. South Carolina is fielding at a .991 clip as well.

The Tigers Clemson, ranked as high as #19 in the nation, enters Saturday’s game with a 4-0 record after defeating Wofford 8-2 on Wednesday. All four of Clemson’s games have been played at Doug Kingsmore Stadium.

The Tigers are hitting .278 with a .405 slugging percentage and .388 on-base percentage. The team has totaled 15 stolen bases, including seven by Addison Johnson. Ben Paulsen, who is 6-for-8 in the last two games, is hitting .500 with one homer and four RBIs. Brad Miller, Jeff Schaus, and Kyle Parker all have four RBIs apiece as well.

The pitching staff has a 2.43 ERA and .234 opponents’ batting average. The staff has allowed just six walks against 42 strikeouts, good for a 7-to-1 strikeout-to-walk ratio. Ryan Hinson has made a team-high three relief appearances and has allowed just one hit, no runs, and no walks with four strikeouts in 3.1 innings pitched. The team is fielding at a .979 clip as well.

Finding the Zone The Tiger pitching staff has an outstanding 7-to-1 strikeout-to-walk ratio this season, as it has 42 strikeouts against only six walks. No Tiger has walked more than one batter. Freshman lefthander Chris Dwyer and sophomore righthander Graham Stoneburner have both struck out nine batters against only one walk.

Tigers Pull Away for 8-2 Win Over Wofford Clemson, ranked #19 in the nation, scored seven runs in its final three at-bats to down Wofford 8-2 at Doug Kingsmore Stadium on February 25. Jeff Schaus’ two-run double in the sixth inning gave the Tigers the lead for good. Clemson added three insurance runs in the eighth inning on home runs by Ben Paulsen went 3-for-4 with two runs and two RBIs, while Mike Freeman had four of Clemson’s eight walks. Casey Harman picked up the win by pitching 1.1 hitless and scoreless innings in relief, while six Tiger pitchers combined for 13 strikeouts against only two walks.