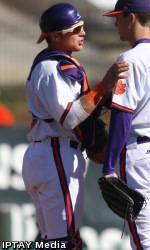 Clemson vs. North Carolina Clemson (6-4, 0-0 ACC), ranked as high as #19 in the nation, will host #6 North Carolina (10-2, 0-0 ACC) in a three-game series at Doug Kingsmore Stadium this weekend. Game times are 4:00 PM (Friday), 2:00 PM (Saturday), and 1:00 PM (Sunday). All three games will be available live via webcast on ESPN3. All three games will also be broadcast live on the radio by Clemson Tiger Sports Network. Live stats will be available at ClemsonTigers.com for all three games as well.

The Series Clemson and North Carolina have met 178 times on the diamond, with the Tigers holding a 96-81-1 advantage in the series dating back to the 1901 season. The Tar Heels have won the last four games in the series, which is tied for their longest winning streak in series history.

In the 2011 season at Boshamer Stadium in Chapel Hill, the Tar Heels swept Clemson by scores of 13-3, 9-5, and 5-4. In 2010 at Doug Kingsmore Stadium, North Carolina won the first and last games of the three-game series, while Clemson won game-two by a score of 10-6. North Carolina has won each of the last four regular-season series (2008-11).

The Tigers hold a 45-28-1 lead over the Tar Heels in games played at Clemson and a 37-14 lead at Doug Kingsmore Stadium. Clemson also holds a 76-62 advantage in ACC regular-season games.

Doug Kingsmore Stadium. Leggett was 0-3 against North Carolina as head coach at Western Carolina, meaning he is 31-28 all-time against the Tar Heels.

The Starting Pitchers In game-one, North Carolina will start sophomore lefthander Kent Emanuel (3-0, 1.00 ERA) on the mound. The Woodstock, GA native has made three starts for a total of 18.0 innings pitched. He has allowed 16 hits (.235 opponents’ batting average) and four walks with 16 strikeouts.

The Tigers will counter with junior righthander Kevin Brady (0-0, 1.13 ERA) on Friday. The Gaithersburg, MD native has made three starts for a total of 16.0 innings pitched. He has allowed 12 hits (.211 opponents’ batting average) and four walks with 16 strikeouts.

In game-two, the Tar Heels will send out junior righty Chris Munnelly (1-0, 1.15 ERA) on the mound. The Winston-Salem, NC native has made two starts and two relief appearances for a total of 15.2 innings pitched. He has given up nine hits (.161 opponents’ batting average) and eight walks with six strikeouts.

Clemson will counter with junior righty Dominic Leone (2-1, 6.75 ERA) on Saturday. The Norwich, CT native has made three starts for a total of 13.1 innings pitched. He has allowed 12 hits (.267 opponents’ batting average) and seven walks with 12 strikeouts.

In game-three, North Carolina will start freshman lefthander Chris O’Brien (0-2, 5.54 ERA) on the mound. The Drexel Hill, PA native has made three starts for a total of 13.0 innings pitched. He has yielded 18 hits (.346 opponents’ batting average) and three walks with 10 strikeouts.

The Tigers will counter with sophomore righthander Kevin Pohle (2-0, 0.00 ERA) on Sunday. The Saint Louis, MO native has made two relief appearances and one start for a total of 12.0 innings pitched. He has allowed 12 hits (.255 opponents’ batting average) and four walks with 12 strikeouts.

The Tar Heels North Carolina, led by 14th-year Head Coach Mike Fox and ranked as high as #6 in the nation, enters the series at #19 Clemson with a 10-2 overall record after winning a pair of midweek games against Davidson (5-4) and Elon (3-0). The Tar Heels, who are 1-0 on opponents’ home fields, also won two of three games against #21 Southern California last weekend.

North Carolina is averaging 7.8 runs per game and hitting .312 with a .455 slugging percentage and .423 on-base percentage. The team has totaled 37 doubles, six triples, three home runs, and 14 stolen bases.

The pitching staff, which has had four shutouts, has a 2.58 ERA and .244 opponents’ batting average along with 94 strikeouts against 36 walks in 108.0 innings pitched. Junior righty Michael Morin has all four of the team’s saves. He has allowed just six hits, no runs, and no walks with seven strikeouts in 7.2 innings pitched over seven relief appearances. North Carolina is fielding at a .978 clip as well.

The Tigers Clemson, ranked as high as #19 in the nation, enters the series against #6 North Carolina with a 6-4 overall record after topping Holy Cross 16-4 on Wednesday. The Tigers are 6-2 at home this season. Friday’s game will be the 1,200th for Jack Leggett as head coach at Clemson.

The Tigers are averaging 6.7 runs per game and hitting .280 with a .431 slugging percentage and .380 on-base percentage. Clemson has also totaled 20 doubles, one triple, 10 homers, and 10 stolen bases.

Richie Shaffer is hitting a team-best .486 with four homers, seven doubles, 13 RBIs, 15 runs, a 1.029 slugging percentage, and a .617 on-base percentage. He has reached base in 19 of his last 23 plate appearances and is 11-for-his-last-15 at the plate. Shaffer has reached base five times in three of the last four games as well. Phil Pohl is hitting .421 with three homers, four doubles, and 17 RBIs.

The pitching staff has a 3.16 ERA and .286 opponents’ batting average in 91.0 innings pitched. The staff has allowed 28 walks against 79 strikeouts. Freshman righthander Daniel Gossett has the team’s lone save. The Tigers are fielding at a .963 clip as well.

Kieboom Named to Johnny Bench Award Watch List Junior catcher Spencer Kieboom (Marietta, GA) was named to the Johnny Bench Award Watch List in March. It was the second year in a row he was named to the list. The award goes the nation’s best catcher. In seven games, he is hitting .208 with one homer, two doubles, and seven RBIs. He suffered an arm injury in a collision at the plate against #2 South Carolina in Charleston, SC on March 2 and has missed the last three games. He is listed as probable for the weekend series against #6 North Carolina.