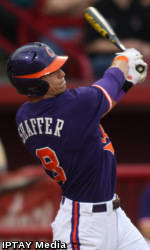 Clemson Baseball Team to Play Host to Miami this Weekend

The Series Clemson and Miami (FL) have met 53 times on the baseball diamond, with the Hurricanes holding a 28-24-1 advantage in the series dating back to the 1977 season. Since the Hurricanes joined the ACC for the 2005 season, the Tigers lead the series 11-7.

The Tigers hold a 9-6 lead over the Hurricanes in games played at Clemson, all of which have been played at Doug Kingsmore Stadium. Clemson also holds a 9-6 advantage in ACC regular-season games.

Doug Kingsmore Stadium. Leggett was 0-1 against Miami as head coach at Western Carolina, meaning he is 16-17 all-time against the Hurricanes.

The Starting Pitchers In game-one, Miami will start graduate lefthander Eric Erickson (4-2, 3.23 ERA) on the mound. The Sarasota, FL native has made six starts for a total of 39.0 innings pitched. He has surrendered 40 hits (.270 opponents’ batting average) and two walks with 33 strikeouts.

The Tigers will counter with junior righthander Kevin Brady (1-2, 2.97 ERA) on Friday. The Gaithersburg, MD native has made six starts for a total of 30.1 innings pitched. He has allowed 27 hits (.245 opponents’ batting average) and 10 walks with 33 strikeouts.

In game-two, the Hurricanes will send out junior righthander Eric Whaley (3-1, 2.21 ERA) on the mound. The Pompano Beach, FL native has made six starts for a total of 36.2 innings pitched. He has surrendered 37 hits (.257 opponents’ batting average) and seven walks with 29 strikeouts.

Clemson will counter with junior righty Dominic Leone (3-2, 6.08 ERA) on Saturday. The Norwich, CT native has made six starts for a total of 26.2 innings pitched. He has allowed 22 hits (.239 opponents’ batting average) and 17 walks with 19 strikeouts.

In game-three, Miami will start junior lefty Steven Ewing (3-0, 2.23 ERA) on the mound. The Orlando, FL native has made six starts and one relief appearance for a total of 40.1 innings pitched. He has allowed 35 hits (.238 opponents’ batting average) and 11 walks with 37 strikeouts.

The Tigers will counter with sophomore righthander Kevin Pohle (3-1, 1.88 ERA) on Sunday. The Saint Louis, MO native has made four starts and two relief appearances for a total of 28.2 innings pitched. He has given up 29 hits (.266 opponents’ batting average) and 12 walks with 20 strikeouts.

The Hurricanes Miami (FL), led by 19th-year Head Coach Jim Morris and ranked as high as #7 in the nation, enters the series at Clemson with a 20-5 overall record and 7-2 ACC mark after defeating Saint Thomas 11-4 on Wednesday. The Hurricanes, who won two of three games over Maryland at home last weekend and are 3-0 in one-run games, are 5-1 on the road this season.

Peter O’Brien is hitting a team-best .398 with nine homers, nine doubles, 31 RBIs, 25 runs, and a .495 on-base percentage. Brad Fieger is batting .351, while Esteban Tresgallo and Julian Santos are both batting .321. Tyler Palmer has a team-high seven steals as well.

The pitching staff has a 3.15 ERA and .259 opponents’ batting average along with 197 strikeouts against 71 walks in 226.0 innings pitched. Junior righty E.J. Encinosa has seven of the team’s nine saves along with 19 strikeouts and a .103 opponents’ batting average in 12.0 innings pitched over 12 relief appearances. Miami is fielding at a .961 clip as well.

The Tigers Clemson enters the series against #7 Miami (FL) with a 12-12 overall record and 3-6 ACC mark after splitting a pair of midweek games. The Tigers won at #18 Georgia by a score of 10-5 on Tuesday before falling at home to Presbyterian College 8-4 on Wednesday. The Tigers, who are 10-6 at home, were also swept at Virginia last weekend.

The pitching staff has a 3.64 ERA and .265 opponents’ batting average in 215.0 innings pitched. The staff has allowed 87 walks against 188 strikeouts, good for a 2.16 strikeout-to-walk ratio. Sophomore righthander Matt Campbell has a team-high two saves along with a 2.65 ERA in 17.0 innings pitched over 10 relief appearances. The Tigers are fielding at a .966 clip as well.

Six is the Magic Number Clemson’s pitching staff may not be among the league leaders in ERA, but it has been consistent in 2012. In 24 games, it has allowed five earned runs or less in 22 games. The other two games saw the staff give up eight earned runs (at #2 South Carolina and at Western Carolina). That is the main reason Clemson is 10-1 when scoring six runs or more on offense this season.

The pitching staff has a solid 3.64 ERA, thanks in large part to one important stat. In the 62 times that Tiger opponents have had a runner on third base with less than two outs, the opposing batter has done his job and drove home that runner on third with an RBI just 32 times. That equates to only 51.6 percent. Historically, a 70-percent mark in that situation is a desired figure.