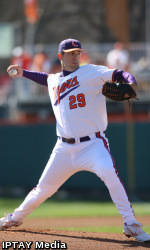 Clemson vs. Holy Cross Clemson (5-4), ranked as high as #19 in the nation, will host Holy Cross (2-4 entering Tuesday’s game at Charlotte) at Doug Kingsmore Stadium on Wednesday. First pitch is scheduled for 4:00 PM. The game will be available live via webcast on TigerCast at ClemsonTigers.com. The game will also be broadcast live on the radio by WCCP (104.9 FM) out of Clemson and can be heard live on the internet at ClemsonTigers.com as well.

The Series Clemson and Holy Cross have met just one time on the diamond. On June 15, 1958, in the Tigers’ second-ever College World Series game in Omaha, NE, the Crusaders beat Clemson 17-4. Holy Cross totaled 19 hits, as every Crusader starter had at least one hit and one run. Larry Bagwell led Clemson’s 10-hit attack by going 3-for-4 at the plate.

The Starting Pitchers Holy Cross will start sophomore righthander Nate Walker (0-2, 27.00 ERA) on the mound. The San Diego, CA native has made one start and one relief appearance for a total of 2.0 innings pitched. He has allowed six hits (.500 opponents’ batting average) and three walks with two strikeouts.

The Tigers will counter with senior righthander David Haselden (0-0, 3.86 ERA) on Wednesday. The Spartanburg, SC native has made two starts for a total of 7.0 innings pitched. He has yielded 12 hits (.400 opponents’ batting average) and two walks with four strikeouts.

The Crusaders Holy Cross, led by fifth-year Head Coach Greg DiCenzo, enters Tuesday’s game at Charlotte with a 2-4 overall record after winning one of three games against two different teams on Sunday and Monday. The Crusaders, who have played all six of their games on the road, also won one of three games at #4 Texas A&M to open the season.

Holy Cross’ top assistant coach and recruiting coordinator is Jeff Kane, who played two seasons at Clemson (1998,99). He was 7-for-26 (.269) with one homer and four RBIs in 28 games in a Tiger uniform in his career.

Holy Cross is averaging 3.7 runs per game and hitting .221 with a .312 slugging percentage and .305 on-base percentage thanks to 22 walks and three hit-by-pitches against 63 strikeouts. The team has also totaled 12 doubles, two home runs, and two stolen bases in six attempts.

Alex Maldonado is hitting .455 wth a double and five runs, while Evan Ocello is batting .333 with a steal. Chris Sintetos is 4-for-8 on the season along with one homer, one double, and six RBIs. Jordan Enos has the team’s other long ball.

The Tigers Clemson, ranked as high as #19 in the nation, enters Wednesday’s game against Holy Cross with a 5-4 overall record after falling twice in three games against #2 South Carolina last weekend. The Tigers, who will be playing their first midweek game of the season, sport a 5-2 home record in 2012.

The Tigers are averaging 5.7 runs per game and hitting .263 with a .399 slugging percentage and .358 on-base percentage thanks to 39 walks and nine hit-by-pitches. Clemson has also totaled 13 doubles, one triple, nine homers, and six stolen bases.

Richie Shaffer, the reigning ACC Player-of-the-Week, is hitting a team-best .452 with four homers, four doubles, 12 RBIs, 12 runs, a .968 slugging percentage, and .585 on-base percentage. Phil Pohl is hitting .371 with three home runs and 12 RBIs, while Steve Wilkerson is batting .367 with a team-high two steals.

The pitching staff has a 3.18 ERA and .278 opponents’ batting average in 82.0 innings pitched. The staff has allowed 27 walks against 75 strikeouts, good for a 2.78 strikeout-to-walk ratio. Freshman righthander Daniel Gossett has the team’s lone save. The Tigers are fielding at a .964 clip as well.

Worth Noting  Clemson has lost its four games by a combined six runs (1.5 runs per loss). The Tigers have won their five games by a combined 16 runs (3.2 runs per win).  Clemson has four comeback wins among its five overall victories in 2012. In each of Clemson’s last three wins, it has overcome a deficit of four runs or more.  Clemson is 3-0 when committing two or more errors and 2-4 when committing less than two errors in 2012.

Polls The Tigers moved fell five spots to #20 in this week’s Baseball America rankings after going 1-2 in three games last week. Clemson stayed at #19 in the Sports Weekly coaches poll and #20 in the Collegiate Baseball poll.

Shaffer Racking Up Awards Junior corner infielder Richie Shaffer (Charlotte, NC) has wasted little time in 2012 racking up awards. In the three-game series against #2 South Carolina and arguably the nation’s best pitching staff, he was 6-for-9 with two homers, two doubles, four RBIs, six runs, six walks, a 1.556 slugging percentage, and an .800 on-base percentage. He reached base in 12 of his 15 plate appearances in the series, including in all five of his plate appearances on March 4 in Clemson’s 6-5 win to snap the Gamecocks’ 19-game winning streak.

For his efforts, he received the Bob Bradley Award as Clemson’s MVP of the three-game series against the Gamecocks. He was also named ACC Player-of-the-Week.

On the season, Shaffer is hitting a team-best .452 with four homers, four doubles, 12 RBIs, 12 runs, 10 walks, a .968 slugging percentage, and a .585 on-base percentage in nine games. The preseason first-team All-American by Baseball America has also reached base via a hit or walk in all nine games this season.