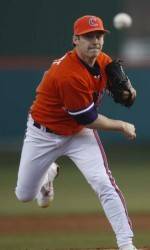 Clemson vs. Gardner-Webb Clemson (9-1), ranked as high as #7 in the nation, will host Gardner-Webb (4-7 entering Tuesday’s game against Furman) on Wednesday afternoon at Doug Kingsmore Stadium. First pitch is scheduled for 4:00 PM. The game will be broadcast live on the radio by WCCP (104.9 FM) out of Clemson and can be heard live on the internet at ClemsonTigers.com.

The Starting Pitchers The Bulldogs will start freshman righthander Conner Scarborough (0-1, 10.00 ERA) on the mound. The High Point, NC native has made four relief appearances and one start for a total of 9.0 innings pitched. He has allowed 16 hits (.390 opponents’ batting average) and seven walks with two strikeouts.

The Tigers will counter with senior righthander Justin Sarratt (0-0, 15.43 ERA) on Wednesday. The Gaffney, SC native has made three relief appearances and one start for a total of 4.2 innings pitched. He has allowed eight hits (.364 opponents’ batting average) and two walks with five strikeouts.

The Bulldogs Gardner-Webb, led by eighth-year Head Coach Rusty Stroupe, enters Tuesday’s game against Furman with a 4-7 overall record after winning both of its games over the weekend, including a 14-2 win over Saint Peter’s on Saturday. The Bulldogs are also 1-3 on opponents’ home fields.

Gardner-Webb is averaging 6.6 runs per game and hitting .304 with a .425 slugging percentage and .367 on-base percentage. The team has totaled 32 doubles, one triple, six home runs, and 20 steals in 26 attempts.

O.J. McFarland is hitting a team-best .383 with five doubles and 14 RBIs, while Josh Drewery is batting .357 with two homers, six doubles, and 12 RBIs. Kurt Fulginiti has added eight doubles and Ty Boyles has hit three homers with 11 RBIs.

The pitching staff has a 4.88 ERA and .274 opponents’ batting average along with 68 strikeouts against 61 walks in 107.0 innings pitched. Sophomore righthander Adam Izokovic has a 2.30 ERA in 15.2 innings pitched over five relief appearances. He also has allowed just five hits and has a .098 opponents’ batting average. The Bulldogs are fielding at a .954 clip as well.

The Tigers Clemson, ranked as high as #7 in the nation, enters the game against Gardner-Webb with a 9-1 record after beating #15 South Carolina twice in three games over the weekend. Clemson is 7-0 at home this year.

The pitching staff has a 3.16 ERA and .229 opponents’ batting average. The staff has allowed 30 walks against 67 strikeouts, good for a 2.2-to-1 strikeout-to-walk ratio. Sophomore righthander David Haselden has not given up a hit or run in 7.1 innings pitched over three relief appearances and has a 2-0 record. The Tigers are fielding at a .963 clip as well.

Polls The Tigers moved up two spots to #7 in the Sports Weekly coaches poll this week after going 3-1 in four games last week. The Tigers also moved up one spot to #12 in the Baseball America poll and fell one spot to #13 in the Collegiate Baseball poll. Clemson’s #7 ranking is its highest since June of 2007.

Second to None Clemson has put up its best offensive numbers in the second inning, and it is not even close. The Tigers have scored 23 runs in the second inning, and average of 2.3 runs per game in that frame. The Tigers, who are averaging 8.7 runs per game, have not scored more than 11 runs in any other inning. Therefore, the 23 runs is more than double the next highest amount.

Epps Walks Away With Another Award Junior outfielder Chris Epps (Stone Mountain, GA) seems to play his best when there is an MVP award at stake. In the 2009 Clemson Regional, he was 10-for-19 (.526) with two homers, one double, six RBIs, and seven runs in five games to earn Clemson Regional MVP honors.

Epps put up near identical numbers to earn the 2010 Bob Bradley Award as Clemson’s MVP of the South Carolina series. In three games against the Gamecocks from March 5-7, he was 7-for-14 (.500) with two homers, one double, six RBIs, six runs, two walks, and one steal in leading the Tigers to two wins. On March 7, his grand slam in the second inning started Clemson’s onslaught in its 19-6 win. He went 3-for-6 with a homer, five RBIs, and two runs in that series-clinching win.

On the season, the Tiger leadoff batter is hitting .286 with two homers, two doubles, six RBIs, 12 runs, a .432 on-base percentage, and three steals. He has his high on-base percentage thanks to nine walks, a trend he has sustained in his three seasons in Tigertown. He is third all-time at Clemson in walks per at-bat (one every 4.13 at-bats).

Tigers Take Two of Three From Gamecocks Clemson, ranked as high as #9 in the nation, won two of three games against #15 South Carolina by a combined score of 28-16 at three different sites from March 5-7. It was the first regular-season series win for the Tigers since 2006. Clemson outhit the Gamecocks .286 to .287 and totaled seven home runs. Chris Epps received the Bob Bradley Award as Clemson’s MVP of the series, as he was 7-for-14 with two homers, one double, six RBIs, six runs, and two walks. Mike Freeman added six hits. The Tigers also had a 4.33 ERA.

In game-one at Doug Kingsmore Stadium in Clemson on March 5, Jeff Schaus added solo home runs in the first inning. David Haselden pitched the final 4.0 innings without allowing a hit or run to earn the victory.

In game-two at Fluor Field in Greenville, SC on March 6, Whit Merrifield’s two-out, run-scoring single in the top of the ninth inning gave South Carolina the lead for good in its 7-5 win over Clemson. Merrifield broke a 4-4 tie with his clutch hit, then the Gamecocks added two more run-scoring hits. Freeman’s RBI single in the bottom of the ninth inning brought the potential tying run to the plate, but the Tigers came up short. Jackie Bradley, Jr. went 3-for-4 with a homer and four RBIs to lead the Gamecocks, who outhit Clemson 9-8. Four Gamecock hurlers combined for 13 strikeouts in the game.

In game-three at Carolina Stadium in Columbia, SC on March 7, Clemson hit five home runs to trounce South Carolina 19-6. It was the most runs scored by Clemson against the Gamecocks since 1962 and the Tigers’ largest margin of victory in the series since 1997. Epps’ grand slam in the second inning started the onslaught, as he was 3-for-6 with five RBIs and two runs. Freeman totaled three hits, including a home run, and three runs. Addison Johnson hit a solo homer, and Scott Weismann pitched 6.0 strong innings to earn the win, while eight Gamecock pitchers combined to allow 14 hits and 11 walks.