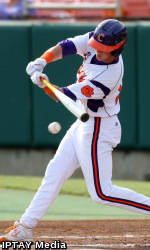 Clemson vs. Furman Clemson (31-21) will host Furman (23-28) at Doug Kingsmore Stadium on Tuesday in the Tigers’ last home game of the regular season. First pitch is scheduled for 6:30 PM. The game will be available live via webcast on TigerCast. The game will also be broadcast live on the radio by WCCP (104.9 FM) out of Clemson and can be heard live on the internet at ClemsonTigers.com as well.

The Series Clemson and Furman have met 200 times on the diamond, with the Tigers leading 139-57-4 in the series dating back to the 1896 season. Clemson’s first two games in school history were against the Paladins, both losses in 1896, which were the Tigers’ only games that season. The two teams have played at least one game every year since 1983.

The Starting Pitchers Furman will start senior lefthander Stephen Gary (3-0, 3.48 ERA) on the mound. The Greenwood, SC native, who will be making his first start of the season, has made 28 relief appearances for a total of 31.0 innings pitched. He has yielded 20 hits (.189 opponents’ batting average), including only three extra-base hits and no homers, and 24 walks with 24 strikeouts.

Clemson will counter with senior righthander David Haselden (3-1, 3.23 ERA) on Tuesday. The Spartanburg, SC native has made 10 relief appearances and three starts for a total of 30.2 innings pitched. He has surrendered 43 hits (.336 opponents’ batting average) and eight walks with 22 strikeouts.

The Paladins Furman, led by 19th-year Head Coach Ron Smith, enters Tuesday’s game at Clemson with a 23-28 overall record and 10-17 SoCon mark after falling twice in three games at The Citadel over the weekend. The Paladins, who are 6-5 in one-run games, are 9-14 on the road this season.

The Tigers Clemson enters Tuesday’s game against Furman with a 31-21 overall record and 16-11 ACC mark after winning two of three games over #1 Florida State from Saturday to Monday. The Tigers, who are 13-7 in night games, are 20-14 at home in 2012.

Richie Shaffer leads the team with a .350 batting average along with 16 doubles, two triples, 10 homers, 43 RBIs, 49 walks, seven steals, and a .478 on-base percentage. He has also reached base via a hit or walk in 30 consecutive games. Thomas Brittle is hitting .321 with six doubles, eight triples, two homers, and 33 RBIs. Steve Wilkerson, who is batting .324, is on a 14-game hitting streak as well.

ACC Standings The Tigers are in third place in the ACC Atlantic Division standings with a 16-11 league record. Florida State has clinched the division title with a 22-5 record, while N.C. State is second at 18-9. The Seminoles also hold the overall ACC lead at 22-5. In the overall ACC standings, Clemson is tied for fourth place with Virginia. Miami (FL) is sixth at 14-13, while Georgia Tech and Virginia Tech are tied for seventh at 11-16. The top-eight teams in the overall ACC standings will play in the 2012 ACC Tournament at NewBridge Bank Park in Greensboro, NC.

Tigers Notch Two More Wins Over Top-Ranked Team With the Tigers’ series win over top-ranked Florida State from May 12-14, Clemson has defeated the #1 team in the nation in 14 times, more than any other sport on the Tiger landscape. That list of 14 wins includes four over Miami (FL), more than any other opponent. Clemson’s 7-2 win over the top-ranked Seminoles on May 12 was its first-ever at home.