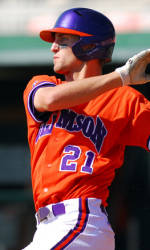 Clemson vs. Furman Clemson (4-1), ranked as high as #19 in the nation, will host Furman (3-2) on Tuesday afternoon at Doug Kingsmore Stadium. First pitch is scheduled for 4:00 PM. The game was moved from its original scheduled date of April 7. The game will be broadcast live on the radio by WCCP (104.9 FM) out of Clemson and can be heard live on the internet at ClemsonTigers.com.

The Series Clemson and Furman have met 195 times on the diamond, with the Tigers holding a 134-57-4 advantage dating back to the 1896 season. Clemson’s first two games in school history were against the Paladins, both losses in 1896, which were the Tigers’ only games that season. The two teams have played at least one game every year since 1983.

The teams played two games in 2008, both Tiger victories. On March 19 at Doug Kingsmore Stadium, the Tigers won 14-2 behind two homers and six RBIs by Doug Hogan. Then on May 7 at Fluor Field in Greenville, the Tigers were victorious 11-5 thanks in part to four hits by Ben Paulsen.

The Starting Pitchers Furman will start junior righthander Ian Parry (0-0, 6.00 ERA) on the mound. The Naples, FL native and former high school teammate of Tiger sophomore outfielder Jeff Schaus has made two starts for a total of 6.0 innings pitched. He has allowed seven hits (.304 opponents’ batting average) and two walks with eight strikeouts.

Clemson will counter with freshman lefthander Chris Dwyer (1-0, 0.00 ERA) on Tuesday. The Swampscott, MA native has made one start for a total of 6.2 innings pitched. He has allowed two hits (.091 opponents’ batting average) and one walk with nine strikeouts.

The Paladins Furman, led by 16th-year Head Coach Ron Smith, enters Tuesday’s game with a 3-2 record after downing UNC Asheville 5-3 on February 24 in its most recent action. The Paladins also split four games against Ball State. All five of their games have been played at home.

The Paladins are averaging 6.8 runs per game and hitting .304 along with a .420 slugging percentage and .385 on-base percentage. The team has totaled five doubles, two triples, four homers, 21 walks against 37 strikeouts, and seven stolen bases in 11 attempts.

Aaron Thompkins leads the squad with a .600 batting average, while Reese Wade is hitting .450. Brian Harrison is also batting .391 with two doubles, two triples, one homer, and five RBIs, while Campbell Lewis has a team-high three steals in three tries.

The pitching staff has a 6.46 ERA and .292 opponents’ batting average along with 37 strikeouts against 19 walks in 46.0 innings pitched. Junior righthander Nick Karow has the team’s lone save in three relief appearances. Furman is fielding at a .971 clip as well.

The Tigers Clemson, ranked as high as #19 in the nation, enters Tuesday’s game with a 4-1 record after falling to South Carolina 3-1 on Saturday at Doug Kingsmore Stadium. All five of the Tigers’ previous games have been at home.

The Tigers are hitting .240 with a .370 slugging percentage and .357 on-base percentage. The team has totaled 15 stolen bases, including seven by Ben Paulsen, who is 6-for-12 in the last three games, is hitting .389 with one homer and four RBIs. Matt Sanders has two of the team’s five home runs and has homered in each of the last two games.

The pitching staff has a 2.54 ERA and .238 opponents’ batting average. The staff has allowed just eight walks against 53 strikeouts, good for a 6.6-to-1 strikeout-to-walk ratio. Casey Harman has a team-high 11 strikeouts against only one walk in 6.1 innings pitched. The team is fielding at a .983 clip as well.