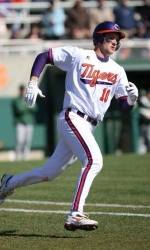 Clemson vs. Elon Clemson (14-6), ranked as high as #20 in the nation, will play host to Elon (12-5) in a two-game series on Tuesday and Wednesday at Doug Kingsmore Stadium. Both games are scheduled to start at 6:30 PM. The games will be broadcast live on the radio by WCCP (104.9 FM) out of Clemson and can be heard live on the internet at ClemsonTigers.com.

The Series Clemson and Elon have met 13 times (all at Clemson) on the diamond, with the Tigers holding an 8-5 lead in the series. In 1920, Elon defeated the Tigers 6-3. The two teams did not meet again until 80 years later, when Clemson came away with a 17-5 victory in 2000.

In 2008, the Tigers won both games at Doug Kingsmore Stadium by scores of 5-4 and 2-1. In 2007, Elon outlasted Clemson 13-12. The Tigers won both regular-season meetings in 2006 by scores of 5-3 and 7-4. The two teams also met in the 2006 Clemson Regional, as the Tigers came away with a 13-3 victory in that contest. Clemson has won six of the last seven games in the series after Elon won four of the first six meetings.

The Starting Pitchers In game-one, Elon will start senior lefthander Cory Harrilchak (0-0, 7.62 ERA) on the mound. The Cary, NC native has made two starts and one relief appearance for a total of 13.0 innings pitched. He has allowed 16 hits (.291 opponents’ batting average) and three walks with 10 strikeouts.

The Tigers will counter with freshman lefthander Will Lamb (0-0, 0.93 ERA) on Tuesday. The Seaford, VA native, who will be making his first career start, has made six relief appearances for a total of 9.2 innings pitched. He has allowed five hits (.143 opponents’ batting average) and two walks with six strikeouts.

In game-two, the Phoenix will send out junior lefty J.D. Reichenbach (2-0, 2.20 ERA) on the mound. The Doylestown, PA native has made five relief appearances and two starts for a total of 16.1 innings pitched. He has given up 10 hits (.185 opponnents’ batting average) and seven walks with 12 strikeouts.

Clemson’s starting pitcher for Wednesday’s game has yet to be determined.

The Phoenix Elon, led by 13th-year Head Coach Mike Kennedy, enters the series at #20 Clemson with a 12-5 overall record and 6-3 SoCon mark after sweeping Furman by a combined score of 41-15 over the weekend. Elon, who is 7-3 on the road this year, has also won four games in a row and seven of its last eight.

Cory Harrilchak is hitting a team-best .438 with eight doubles, four homers, and 18 RBIs. Justin Hilt is batting .371 with six home runs and 22 RBIs along with six stolen bases, while Bennett Davis is hitting .362 with five homers and 18 RBIs.

The pitching staff has a 5.76 ERA and .292 opponents’ batting average along with 116 strikeouts against 76 walks in 153.0 innings pitched. Sophomore righthander Thomas Girdwood has five of the team’s eight saves and 10 strikeouts in 6.2 innings pitched over seven relief appearances. Elon is fielding at a .971 clip as well.

The Tigers Clemson, ranked as high as #20 in the nation, enters the series against Elon with a 14-6 overall record and 5-4 ACC mark after winning one of three games at #24 Florida State over the weekend. All six of Clemson’s losses have been by three runs or less. The Tigers sport a 11-2 home record as well.

The pitching staff has a 2.71 ERA and .215 opponents’ batting average. The staff has allowed 58 walks against 178 strikeouts, good for a 3.1-to-1 strikeout-to-walk ratio. Casey Harman has 22 strikeouts against only four walks in 22.2 innings pitched. The team is fielding at a .966 clip as well.

Polls The Tigers fell one spot to #20 in the Sports Weekly coaches poll this week after going 3-2 in five games last week. Clemson also dropped four spots to #22 in the Collegiate Baseball poll and went from #20 to out of the top 25 in the Baseball America poll.

Close Games the Norm Clemson has a 14-6 overall record in 2009. All six losses have been by three runs or less, as the Tigers have lost one one-run game, two two-run games, and three three-run games. In their 14 wins, the Tigers have outscored their opponents 116-31, an average margin of victory of 6.1 runs per game. In Clemson’s six losses, it has been outscored 33-19, an average margin of defeat of 2.3 runs per game.

Seminoles Take Series 2-1 in Close Games Florida State, ranked #24 in the nation, won two of three games over #18 Clemson at Dick Howser Stadium from March 20-22. All three games were decided by three runs or less, as Florida State outscored the Tigers 19-14. The Seminoles outhit Clemson .299 to .248 and had eight steals. The Tigers went just 3-for-33 (.091) with runners in scoring position in the series. Jeff Schaus each had four hits apiece. The Tiger pitching staff also totaled 28 strikeouts.

In game-one on March 20, starter Sean Gilmartin struck out eight in 6.1 innings pitched to lead Florida State to a 5-2 win over Clemson. Stuart Tapley’s two-out single in the fifth inning scored the go-ahead run and the Seminoles held the lead for the rest of the game. Only two of the five Florida State runs were earned, as three Tiger errors proved costly. Johnson and Ben Paulsen both hit home runs, but Clemson was 0-for-14 with runners in scoring position and 1-for-19 with runners on base. Schaus had a game-high two hits for the Tigers, who saw their seven-game winning streak end.

In game-two on March 21, Clemson scored three runs in the 11th inning and held on for an 8-7 win over Florida State. The back-and-forth game saw the Tigers hold a 5-3 lead before Tyler Holt hit his second homer of the game to tie the score in the eighth inning. Paulsen’s sacrifice fly and Parker’s two-run homer in the top of the 11th inning gave the Tigers an 8-5 lead. The Seminoles rallied for two runs in the bottom of the 11th inning and had runners at second and third with two outs. But Casey Harman earned his first career save by forcing Rafael Lopez to ground out to second base to end the game.

In game-three on March 22, Florida State scored four runs in the ninth inning, capped by Mike McGee’s walkoff three-run homer, to down Clemson 7-4. Clemson took a 4-3 lead in the eighth inning on Johnson’s suicide squeeze bunt with two strikes that scored Jason Stolz. But pinch-hitter Tommy Oravetz’s leadoff single in the ninth started the Seminole rally. Jason Stidham’s sacrifice fly in foul territory tied the score, then McGee hit an opposite-field homer, his second long ball of the game, with two outs. McGee also pitched 6.0 quality innings in a starting role. Stolz had a team-high two hits and Clemson had 16 baserunners thanks in part to eight walks. 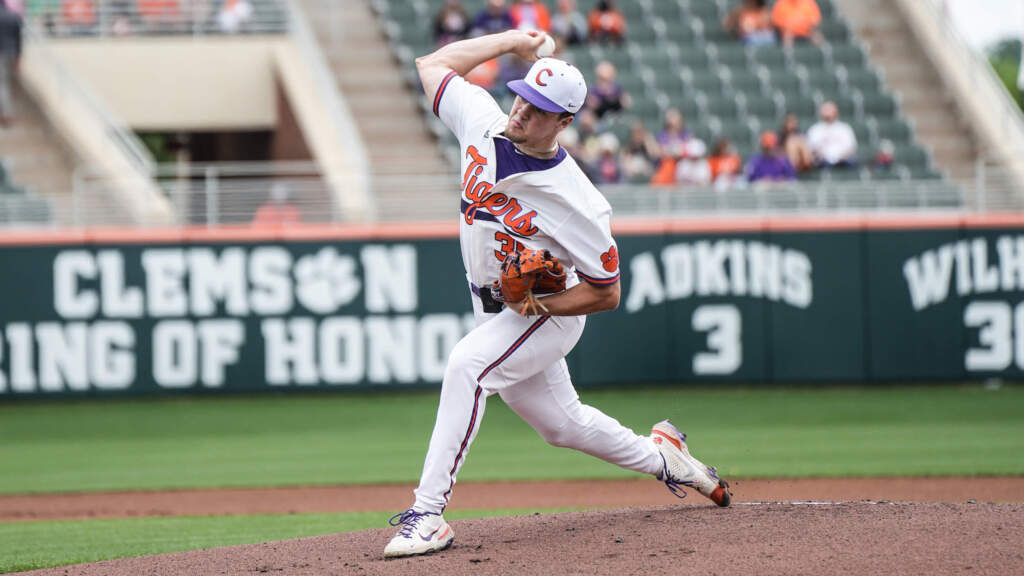