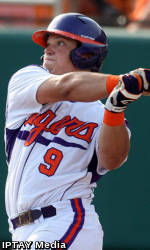 Clemson vs. Coastal Carolina Clemson (24-17) will host Coastal Carolina (26-13) at Doug Kingsmore Stadium on Tuesday. First pitch is scheduled for 6:30 PM. The game will be available live via webcast on ClemsonTigers.com as well.

The Series Clemson and Coastal Carolina have met 47 times on the diamond, with the Tigers holding a 40-7 lead in the series that dates back to 1986.

The Starting Pitchers Coastal Carolina will start freshman lefthander Javier Reynoso (2-1, 3.46 ERA) on the mound. The Tampa, FL native has made seven relief appearances and six starts for a total of 26.0 innings pitched. He has yielded 20 hits (.213 opponents’ batting average) and 17 walks with 15 strikeouts.

Clemson will counter with freshman righty Daniel Gossett (3-2, 5.40 ERA) on Tuesday. The Lyman, SC native has made six starts and six relief appearances for a total of 38.1 innings pitched. He has surrendered 35 hits (.241 opponents’ batting average) and 17 walks with 45 strikeouts.

The Chanticleers Coastal Carolina, led by 17th-year Head Coach Gary Gilmore, enters Tuesday’s game at Clemson with a 26-13 overall record and 9-3 Big South Conference mark after winning two of three games over High Point at home over the weekend. The Chanticleers, who are 7-4 in one-run games, are 4-6 on the road in 2012.

Coastal Carolina is averaging 5.2 runs per game and hitting .271 with a .358 slugging percentage and .374 on-base percentage thanks to 176 walks and 47 hit-by-pitches against 237 strikeouts. The team has also totaled 62 doubles, six triples, 13 home runs, 49 sacrifice bunts, and 60 stolen bases in 79 attempts.

Daniel Bowman leads the team with a .366 batting average along with eight doubles, four triples, four homers, 25 RBIs, and seven steals. Tucker Frawley is hitting .331 with one homer and 18 RBIs, while Alex Buccilli is batting .315 with three home runs and 19 RBIs. Rich Witten has a team-high 29 RBIs, while Jacob May has a team-high 15 stolen bases.

The Tigers Clemson enters Tuesday’s game against Coastal Carolina with a 24-17 overall record and 12-9 ACC mark after sweeping Maryland on the road over the weekend. The Tigers, who are 15-11 at home, are 5-0 on Tuesday this season.

The Tigers had doubleheader sweeps over UAB and Maryland this season, Boston College, Gardner-Webb, and Virginia Tech in 2011, and Florida Gulf Coast in 2010. Doubleheaders are rarely scheduled, as most are played due to inclement weather during a weekend series.