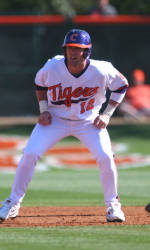 Clemson vs. Western Carolina & PresbyterianClemson (19-20-1) will travel to Cullowhee, NC to play Western Carolina (18-20) on Tuesday at Hennon Stadium. First pitch is scheduled for 7:00 PM. The Tigers will then play Presbyterian (11-26) at Fluor Field in Greenville, SC on Wednesday at 7:15 PM. Clemson will be the designated home team for the neutral-site contest, which is the Tigers’ second-ever game on that field. Last year, the Tigers defeated Wofford 12-3 at Fluor Field.

Both games will be broadcast live on the radio by WCCP (104.9 FM) out of Clemson and can be heard live on the internet at www.clemsontigers.com for both games.

The two teams split the two meetings in 2007, as the Catamounts won 6-3 at Cullowhee, NC on March 20 in the first game, while the Tigers were victorious 15-6 in the return trip eight days later. The two teams also split two games in 2006, while Clemson defeated Western Carolina twice in 2005. The two teams have played at least one game every year since 1978.

The Series (Presbyterian)Clemson and Presbyterian have met 75 times on the diamond, with Clemson holding a 56-19 lead in the series dating back to 1906. The two teams have not met since 1950, when Clemson won both meetings by scores of 15-2 and 11-10 (10 innings).

The series is tied 2-2 in neutral-site contests, all of which have been played at Greenwood, SC or Laurens, SC. Head Coach Jack Leggett has never faced Presbyterian on the diamond as well.

The Tigers will start junior righthander Trey Delk (0-0, 4.91 ERA) on Tuesday. The Elgin, SC native, who will be making his first career start, has made eight relief appearances for a total of 14.2 innings pitched. He has allowed 15 hits (.259 opponents’ batting average) and 10 walks with 13 strikeouts.

The Starting Pitchers (Presbyterian)Presbyterian will send out senior righthander Ben Dollar (2-2, 6.10 ERA) on the mound. The Gaffney, SC native has made nine starts for a total of 48.2 innings pitched. He has allowed 54 hits (.287 opponents’ batting average) and 31 walks with 36 strikeouts.

The Tigers have yet to determine their starting pitcher.

The CatamountsWestern Carolina, led by first-year Head Coach Bobby Moranda, enters Tuesday’s game against Clemson with an 18-20 overall record and 7-8 Southern Conference mark after losing twice in three games at Appalachian State over the weekend. However, the Catamounts, who are 11-3 at home, have won 12 of their last 18 games after starting the season 6-14.

The Catamounts are averaging 8.6 runs per game and hitting .314 with a .517 slugging percentage and .421 on-base percentage. The team has hit 83 doubles, eight triples, and 58 home runs, and it has totaled 199 walks and 67 hit-by-pitches. Western Carolina has also stolen 82 bases in 101 attempts, including 17 in 21 tries by Blake Murphy.

The pitching staff has a 6.80 ERA and .295 opponents’ batting average along with 270 strikeouts against 165 walks in 330.2 innings pitched. Sophomore lefty Chris Masters has two saves and 45 strikeouts in 41.2 innings pitched over 18 appearances (one start) this year. The team is fielding at a .948 clip as well.

The Blue HosePresbyterian, led by fourth-year Head Coach Elton Pollock, enters this week’s action with an 11-26 overall record after winning one of three games at Savannah State over the weekend. Presbyterian, who is 0-2 in neutral-site games, is scheduled to play South Carolina-Upstate on Tuesday night.

Cory Lyda leads the team with a .339 batting average, 14 doubles, and a .441 on-base percentage. Jared Combs has totaled five homers and 26 RBIs, both team-highs, while Nate Morton is hitting .287 with 17 RBIs.

The pitching staff has a 6.53 ERA and .312 opponents’ batting average along with 202 strikeouts against 160 walks in 303.0 innings pitched. Sophomore righty Zach Snipes has three saves and has allowed only eight walks in 36.2 innings pitched. Presbyterian is fielding at a .954 clip as well.

The pitching staff has a 4.74 ERA and .276 opponents’ batting average. Matt Vaughn has nine saves and a 3.33 ERA in 20 relief appearances. The junior righthander has allowed just six walks with 30 strikeouts in 27.0 innings pitched. Clemson is fielding at a .963 clip as well.

The last Tiger tie in a game played at Clemson was a 6-6 draw in six innings against Kent State in the second game of a doubleheader on March 24, 1969.

In game-one on April 18, Clemson pounded out 14 hits and snapped its 11-game losing streak with a 7-4 victory over Duke at Jack Coombs Field. The Tigers took the lead in the sixth inning on Chris Epps’ two-out, two-run single. Clemson scored two runs in the seventh inning on Matt Vaughn pitched 2.0 scoreless innings to record the save.

In game-two on April 19, Christopher Manno struck out 12 batters in 5.2 innings pitched to lead Duke to a 10-1 win over Clemson at Jack Coombs Field. Manno, making his first ACC appearance of the season, allowed only four hits, no runs, and three walks to earn the win. The Blue Devils broke the game open with five two-out runs in the sixth inning on Matt Williams’ three-run double and Nate Freiman’s two-run homer. Williams totaled four RBIs, while Freiman went 3-for-3 with two homers and three RBIs. Clemson had only seven hits, including two by Schaus. Duke’s win snapped Clemson’s 11-game winning streak in the series.

In game-three on April 20, Clemson and Duke played to a 6-6 tie in 10 innings at Jack Coombs Field. The Blue Devils scored two runs apiece in the sixth, seventh, and eighth innings to take a 6-2 lead. But with two outs in the ninth inning, Ben Paulsen followed with a three-run homer to tie the score. After a scoreless 10th inning, Parker hit a two-run homer in the 11th inning to give Clemson an 8-6 lead. However, inclement weather halted play. After over an hour of rain, the game was called due to unplayable field conditions, resulting in the final score reverting back to the score at the end of the 10th inning. The Tigers outhit Duke 12-9, including three hits by Schaus.