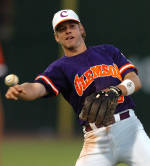 Clemson vs. Furman Clemson (32-16), ranked as high as #19 in the nation, will travel to Greenville, SC to play Furman (21-23) at Fluor Field on Wednesday at 7:00 PM. Clemson will be the designated visiting team for the game, which is the Tigers’ fifth all-time game on that field, and occupy the third-base dugout. On March 3, 2009, the Paladins rallied for a 4-2 victory in 14 innings over the Tigers at Doug Kingsmore Stadium. The game will be broadcast live on the radio by WCCP (104.9 FM) out of Clemson and can be heard live on the internet at ClemsonTigers.com.

The Series Clemson and Furman have met 196 times on the diamond, with the Tigers holding a 134-58-4 advantage dating back to the 1896 season. Clemson’s first two games in school history were against the Paladins, both losses in 1896, which were the Tigers’ only games that season. The two teams have played at least one game every year since 1983.

The two teams last played on March 3, 2009 at Doug Kingsmore Stadium. In that game, Clemson was one strike away from a no-hitter and 2-0 win, but an infield single and two-run homer by Brian Harrison tied the score. The Paladins went on to a 4-2 victory in 14 innings.

The two teams played two games in 2008, both Tiger wins. On March 19, 2008 at Doug Kingsmore Stadium, the Tigers won 14-2 behind two homers and six RBIs by Doug Hogan. Then on May 7, 2008 at Fluor Field in Greenville, the Tigers were victorious 11-5 thanks in part to four hits by Ben Paulsen.

The Starting Pitchers Furman will start senior righthander J.P. Goldsberry (3-4, 9.36 ERA) on the mound. The Tampa, FL native has made eight starts and four relief appearances for a total of 33.2 innings pitched. He has allowed 55 hits (.369 opponents’ batting average) and 14 walks with 22 strikeouts.

Clemson will counter with freshman righthander David Haselden (0-0, 6.55 ERA) on Wednesday. The Spartanburg, SC native has made three relief appearances and one start for a total of 11.0 innings pitched. He has given up 14 hits (.333 opponents’ batting average) and no walks with eight strikeouts.

The Paladins Furman, led by 16th-year Head Coach Ron Smith, enters Wednesday’s game against #19 Clemson with a 21-23 overall record and 9-15 SoCon mark after winning two of three games at Georgia Southern over the weekend. Furman, who has yet to play a neutral-site game, is 9-2 in one-run games.

The pitching staff has a 7.28 ERA and .328 opponents’ batting average along with 275 strikeouts against 176 walks in 393.1 innings pitched. Junior righthander Nick Karow has a team-high three saves in 11 relief appearances. The Paladins are fielding at a .971 clip as well.

The Tigers Clemson, ranked as high as #19 in the nation, enters Wednesday’s game against Furman with a 32-16 overall record and 16-11 ACC mark after winning two of three games against Maryland at home over the weekend. The Tigers are 1-0 in neutral-site contests.

The pitching staff has a 3.59 ERA and .250 opponents’ batting average. It has allowed 148 walks against 405 strikeouts, good for a 2.7-to-1 strikeout-to-walk ratio. Tomas Cruz and Matt Vaughn are tied for the team lead with three saves apiece. The Tigers are fielding at a .968 clip as well.

Worth Noting  Ben Paulsen is 11-for-17 (.647) with four doubles, one homer, eight runs, and eight RBIs in four career games at Fluor Field.

Polls The Tigers fell two spots to #19 in the Sports Weekly coaches poll this week after going 2-1 in three games last week. Clemson also stayed at #19 in the Collegiate Baseball poll and moved up one spot to #20 in the Baseball America poll.

ACC Standings The Tigers are in second place in the ACC Atlantic Division standings with a 16-11 record. Florida State, who has an 18-7 ACC mark and owns the ACC’s best league mark, clinched the division title and will either be the #1 or #2 seed in the ACC Tournament. Boston College is in third place in the Atlantic Division with a 12-13 ACC record. The Tigers also own the fifth-best record in the ACC standings among the 12 league members.

In game-one on May 2, Clemson totaled 15 hits, including eight extra-base hits, on its way to an 11-2 victory over Maryland. The Tigers broke the game open with four runs in the fifth inning and never looked back. Brad Miller had a game-high three hits, while Chris Epps added two hits and two RBIs. Wilson Boyd and Richard Mounce added solo home runs as well. Ryan Hinson pitched 2.2 scoreless innings in relief of one-hit ball with four strikeouts to earn the win. Four Tiger pitchers combined to allow just five hits and two unearned runs. The four hurlers also limited Maryland to just 1-for-18 with runners on base, as the Terrapins stranded 12 runners on base in the game.

In game-two on May 3, which was the first game of a doubleheader, Clemson scored three runs in the sixth inning and beat Maryland 7-4. Ben Paulsen led off the bottom of the sixth with a homer to tie the score. The Tigers later scored two more runs in the frame to take the lead for good. The Tigers outhit Maryland 9-7 and totaled four extra-base hits. Reliever Matt Vaughn recorded the save with a scoreless ninth inning.

In game-three on May 3, which was the second game of a doubleheader, Tyler Bennett’s two-run single in the ninth inning broke a 6-6 tie and lifted Maryland to an 8-6 win over Clemson. The Tigers had a 6-4 lead before two costly errors set up Matthew Murakami’s two-out, two-run triple in the sixth inning to tie the score. Clemson also left the bases loaded in both the sixth and seventh innings without scoring a run. Clemson, who outhit the Terrapins 15-11, put 23 batters on base, but it scored just six runs and stranded 13 runners on base. The win was Maryland’s first at Clemson since 1992, snapping the Tigers’ 23-game home winning streak over the Terrapins.