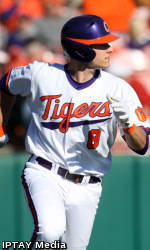 Clemson vs. Elon Clemson (9-8) will play two midweek games against Elon (12-8) at two different sites on Tuesday and Wednesday. The two teams will square off at Doug Kingsmore Stadium on Tuesday at 6:30 PM, then the two will travel to Fluor Field in Greenville, SC to play on Wednesday at 5:00 PM. Clemson will be the designated home team and occupy the first-base dugout on Wednesday.

The Series Clemson and Elon have met 19 times (all at Clemson) on the diamond, with the Tigers holding a 12-7 lead in the series. The Tigers also lead 12-6 in games played at Doug Kingsmore Stadium.

Jack Leggett is 12-6 against Elon as Clemson’s head coach and was 1-3 against the Phoenix as Western Carolina’s head coach. Therefore, Leggett has a 13-9 all-time record against Elon.

The Starting Pitchers In game-one, Elon will start sophomore Jim Stokes (1-2, 2.70 ERA) on the mound. The 6’7″ righthander from Royersford, PA has made four starts and one relief appearance for a total of 16.2 innings pitched. He has allowed 11 hits (.204 opponents’ batting average) and 14 walks with 12 strikeouts.

The Tigers will counter with junior righthander Jonathan Meyer (0-1, 3.29 ERA) on Tuesday. The San Diego, CA native has made eight relief appearances for a total of 13.2 innings pitched. He has yielded 17 hits (.279 opponents’ batting average) and three walks with 13 strikeouts.

Both teams’ starting pitchers for Wednesday have yet to be determined.

The Phoenix Elon, led by 16th-year Head Coach Mike Kennedy, enters the series against Clemson with a 12-8 overall record and a 6-3 SoCon mark after falling twice in three games at Davidson over the weekend. Elon, who is 5-6 on opponents’ home fields, is 12-2 when scoring three runs or more and 0-6 when scoring less than three runs.

Alex Swim is hitting a team-best .329 with one home run and 14 RBIs, while Jake Luce is second on the squad with a .324 batting average, six doubles, two triples, one home run, and 11 RBIs. Garrett Koster is the Phoenix’s top power hitter with four home runs, seven doubles, one triple, and 14 RBIs. Five different Phoenix players have totaled at least six stolen bases. Niko Fraser has a team-high seven steals as well.

The pitching staff has a 3.08 ERA and .221 opponents’ batting average along with 146 strikeouts against 84 walks in 184.1 innings pitched. Junior righthander Nate Young has three of the team’s six saves in a team-tying-high nine relief appearances. Elon is fielding at a .953 clip as well.

The Tigers Clemson enters the series against Elon with a 9-8 overall record and a 3-3 ACC mark after sweeping Boston College at home over the weekend. The Tigers sport a 9-5 home record in 2012.

The Tigers are averaging 5.8 runs per game and hitting .272 with a .399 slugging percentage and .370 on-base percentage. Clemson has also totaled 31 doubles, two triples, 13 homers, and 13 stolen bases under Head Coach Jack Leggett, who has 1,198 career victories.

Richie Shaffer is hitting a team-best .393 with four homers, eight doubles, one triple, 16 RBIs, 19 runs, and a .532 on-base percentage. Steve Wilkerson is batting .365 with a team-high four stolen bases, while Phil Pohl is hitting .328 with three homers and a team-high 20 RBIs.

The pitching staff has a 3.54 ERA and .271 opponents’ batting average in 155.0 innings pitched. The staff has allowed 63 walks against 134 strikeouts. Junior righty Scott Firth has one of the team’s three saves along with a 1.15 ERA in 15.2 innings pitched over eight relief appearances. The Tigers are fielding at a .966 clip as well.

Tigers 9-3 All-Time at Fluor Field Fluor Field, the home of the Boston Red Sox A affiliate Greenville Drive since 2006, is modeled after Fenway Park, with identical field dimensions and a “Green Monster.” The Tigers have played 12 games at the ballpark since 2007 and are 9-3.

ACC Standings The Tigers are tied for third place in the ACC Atlantic Division standings with a 3-3 league record. In the division, Florida State is in first place with a 5-0 record, while N.C. State is second at 5-1. Wake Forest is tied with the Tigers at 3-3. The Seminoles also hold the overall ACC lead with a 5-0 record. In the overall ACC standings, Clemson is tied for fifth place.

Pohle Leading the ACC in ERA Sophomore righthander Kevin Pohle (Saint Louis, MO) did not start the season in the weekend rotation, but he has quickly made a name for himself as Clemson’s current Sunday starter. He made his first weekend start of the season against #2 South Carolina on March 4 in a game the Tigers won.

In 24.2 innings pitched over five appearances (three starts) in 2012, Pohle is 3-0 with an ACC-best 1.09 ERA. He has allowed 25 hits (.263 opponents’ batting average), three earned runs, and eight walks with 19 strikeouts. His ability to keep the ball down in the strikezone with his sinking action has been a key to his success.