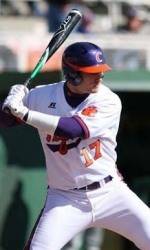 The game on Thursday will be shown live via webcast at ClemsonTigers.com for all three contests as well.

The Series Clemson and N.C. State have met 170 times on the baseball diamond, with the Tigers holding a 101-68-1 lead in the series dating back to the 1921 season.

In 2008 at Doug Kingsmore Stadium, the Tigers won two of three games. Clemson won the final two games by scores of 3-2 and 2-0 after N.C. State won the series-opener 5-4. Then in the 2008 ACC Tournament at Jacksonville, FL, N.C. State blanked Clemson 10-0 in seven innings. In 2007 at Doak Field, the Wolfpack won two of three games over the Tigers.

N.C. State holds a 36-35 lead in games played in Raleigh. The Tigers also have a 79-54 record against the Wolfpack in ACC regular-season games.

The Starting Pitchers In game-one, N.C. State will start junior lefthander Jimmy Gillheeney (6-4, 3.24 ERA) on the mound. The Johnston, RI native has made 12 starts for a total of 80.2 innings pitched. He has allowed 78 hits (.248 opponents’ batting average) and 30 walks with 75 strikeouts.

The Tigers will counter with senior righthander Trey Delk (3-1, 2.31 ERA) on Thursday. The Elgin, SC native has made eight starts for a total of 35.0 innings pitched. He has allowed 36 hits (.261 opponents’ batting average) and 14 walks with 29 strikeouts.

In game-two, the Wolfpack will send out junior lefty John Lambert (1-4, 5.80 ERA) on the mound. The Chesterton, IN native has made 12 relief appearances and seven starts for a total of 45.0 innings pitched. He has yielded 37 hits (.219 opponents’ batting average), 34 walks, and only one home run with 51 strikeouts.

Clemson will counter with sophomore lefty Casey Harman (6-3, 3.61 ERA) on Friday. The South Burlington, VT native has made nine starts and nine relief appearances for a total of 62.1 innings pitched. He has given up 70 hits (.283 opponents’ batting average) and 11 walks with 59 strikeouts.

N.C. State’s starter for game-three has yet to be determined.

The Wolfpack N.C. State, led by 13th-year Head Coach Elliott Avent, enters the series against #14 Clemson with a 25-28 overall record and 10-17 ACC mark after topping Appalachian State 10-6 at home on Tuesday. The Wolfpack also defeated top-ranked North Carolina twice in three games at Doak Field last weekend. N.C. State, who is 17-14 at home, must win three games against Clemson and receive help from North Carolina and Virginia for its season to continue past this weekend.

Andrew Ciencin is hitting .299 with 14 doubles, while Devon Cartwright is batting .272 with five homers, 31 RBIs, and nine steals. Kyle Wilson owns the school record with 30 stolen bases, while Drew Poulk has a team-high seven home runs.

The series will feature the 2008 ACC Football Rookie-of-the-Year and First-Team All-ACC quarterback in Russell Wilson. The sophomore infielder is hitting .262 in 24 games (19 starts), as he has been hampered by injury on the diamond this season. He joins Clemson’s Kyle Parker as two-sport standouts in this weekend’s series. Parker red-shirted on the gridiron in 2008 and will vie for the starting quarterback job as a red-shirt freshman in 2009.

The Tigers Clemson, ranked as high as #14 in the nation, enters the series at N.C. State with a 36-17 overall record and 16-11 ACC mark after topping College of Charleston 5-2 at home on Tuesday and Furman 8-5 at Fluor Field in Greenville, SC on Monday. The Tigers also won two of three games against UNC Wilmington at home over the weekend. The Tigers are 7-9 on opponents’ home fields as well.

The pitching staff has a 3.50 ERA and .249 opponents’ batting average. The staff has allowed 160 walks against 441 strikeouts, good for a 2.8-to-1 strikeout-to-walk ratio. Matt Vaughn has a team-high four saves. The Tigers are fielding at a .968 clip as well.

Epps Moves Into Leadoff Spot Sophomore outfielder Chris Epps (Stone Mountain, GA) was relegated to a backup role for most of the season. But he was inserted, not only into the starting lineup, but into the leadoff spot in the batting order in the April 25 game against #4 Georgia Tech. He helped the Tigers to two wins in the final two games of that series and has batted in the leadoff spot ever since, a total of 10 games.

Epps’ forté is finding any way on base. He has walked 20 times in only 76 at-bats this season, good for one walk every 3.80 at-bats, and has a solid .394 on-base percentage. He has also raised his batting average to .237 and has four doubles, two triples, one homer, 15 RBIs, 19 runs, and five steals this season.

In his career, Epps has walked 50 times in 177 at-bats, meaning he has walked once every 3.54 at-bats during his career. That is the best mark in Clemson history.

Tigers Stop College of Charleston 5-2 Four Tiger pitchers limited College of Charleston to two unearned runs on six hits in #14 Clemson’s 5-2 win at Doug Kingsmore Stadium on May 12. Clemson held the Cougars in check after they entered the game hitting .358 and on a 10-game winning streak, the nation’s longest streak at the time. The Tigers also improved to 21-0 all-time against the Cougars. Starter Jeff Schaus added a home run and two RBIs as well.