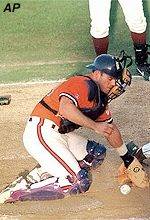 CLEMSON, S.C. – Brian Ellis singled in the bottom of the 12th inning to knock in pinch runner Brian Holstad and lift Clemson to a 6-5 win over Wake Forest in the first game of a Saturday twin bill.

Jarrod Schmidt drew a lead-off walk to start the 12th and was replaced by Holstad, who was then hit over by Ryan Riley on a sacrifice bunt. After another walk on Stone, Schmidt sent a blast off the fence in right center field. The win snapped the Tigers’ six-game losing streak to Wake Forest and ended the Deacons’ 11-game season win streak. Wake Forest had also won seven consecutive games in the Atlantic Coast Conference.

The game started off for the Tigers nearly the same way Wednesday’s game against South Carolina did. Clemson starter Ryan Mottl gave up a triple by Cory Sullivan, the first batter of the game. Jason Aquilante knocked in Sullivan to give the Demon Deacons a 1-0 lead.

The Tigers battled back to take a 2-1 lead in the bottom of the second. Schmidt knocked in Jeff Baker, who had reached on a single and second baseman Ryan Riley hit in Henri Stanley, who boarded on an error by Wake Forest shortstop Jamie Athas.

The Deacons re-took the lead in the top of the third. Stephen Sullivan opened the inning with a lead off double. Chase Voshell batted in Sullivan and then Danny Borrell doubled in Voshell to go up 3-2. Patrick Boyd opened the Clemson fifth inning with a fly out to Carlos Brackley in right field, but then Deacon started Scott Siemon gave up four straight hits, including two singles, by Stanley and Casey Stone, a double by Jarrod Schmidt and a triple by Riley.

Clemson took that 5-3 margin to the top of the eighth inning. Mottl hit Borrell to start the inning. Right handed pitcher Kevin Lynn came into strike out the next two batters, but he then gave up an RBI single to Brackley. Brackley was advanced to third by Athas on a single to right field. Mike Proto relieved Lynn but gave up a hit and then Nick Glaser promptly replaced Proto, but a balk tied the game, sending Athas across the plate.

The Tigers were retired in order in the bottom of the eighth and then Wake Forest stranded two runners in the top of the ninth. Khalil Greene led off the bottom of the ninth with a double and then Michael Johnson was intentionally walked. Baker popped up a bunt for the first out and then Boyd lined out to second base. Greene and Johnson were left stranded when Mike Calitri, pinch-hitting for Stanley, flied out to right field to send the game to extra innings.

Neither team threatened until the 12th inning. Wake Forest put two runners on base that reached on walks with only one out. Clemson was able to get out of the inning by striking out Matt Price and forcing Cory Sullivan to ground out to short to end the inning.

Ellis finished 2 for 7 with the lone RBI, while Stanley, Schmidt and Riley were all 2 for 4 on the afternoon.

Thomas Boozer who came on to record the final out in the top of the 12th, got the win to improve to 1-1 on the year. David Bush who pitched the final five innings for the Deacons was tagged with the loss to fall to 2-2.