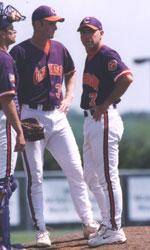 Clemson, winner of 10 games in a row, has earned a #1 ranking in all three baseball polls released Monday. Baseball America moved the Tigers ahead of Stanford after Clemson’s 5-0 week, including a three-game sweep of Maryland over the weekend. Stanford, who was #1 last week, went 2-1 in winning its home series with Texas this past weekend. Clemson (23-1) remains #1 in both the Collegiate Baseball and ESPN/Baseball Weekly polls.