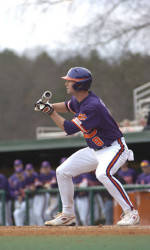 Clemson vs. Winthrop Clemson (6-1), ranked as high as #2 in the nation, will play host to Winthrop (8-5) on Wednesday at Doug Kingsmore Stadium. First pitch is scheduled for 4:00 PM. The game will be broadcast live on the radio by WCCP (104.9 FM) out of Clemson and can be heard live on the internet at WCCPFM.com. Live stats will also be available at ClemsonTigers.com for the game.

The Starting Pitchers Winthrop will start sophomore righthander Alex Wilson (0-0, 1.16 ERA) on the mound. The Hurricane, WV native has made four starts for a total of 23.1 innings pitched. He has yielded 19 hits (.213 opponents’ batting average) and nine walks with 17 strikeouts. As a freshman on April 18, 2006, Wilson earned the win at Clemson by pitching 8.0 innings, allowing eight hits, two earned runs, and no walks with five strikeouts in the Eagles’ 6-3 victory.

The Tigers will counter with junior righty P.J. Zocchi (1-0, 2.79 ERA) on Wednesday. The Bronx, NY native has made two starts for a total of 9.2 innings pitched. He has allowed five hits (.152 opponents’ batting average), three runs, and three walks with 10 strikeouts. He has also never faced the Eagles.

The Eagles Winthrop, led by 16th-year Head Coach Joe Hudak, enters Wednesday’s game with an 8-5 overall record after falling twice in three games at home versus Miami (OH) over the weekend and losing at Georgia 7-6 on Tuesday. The team, who is 1-3 on the road, started the season by winning one of three games at UCLA.

The Eagles are hitting .293 as a team with a .361 on-base percentage. They have also totaled 15 sacrifice bunts on the season. Eddie Tisdale leads the club with a .391 batting average. Chris Carrara has four of the team’s seven stolen bases as well. Six different Eagles have accounted for the team’s six home runs. Winthrop has a 3.48 ERA and .271 opponents’ batting average. The staff also has 92 strikeouts against 40 walks and has allowed only two home runs in 116.1 innings pitched this season. Senior righthander Jonathan Settle has two of the team’s three saves. Winthrop sports a .949 fielding percentage as well.

The Tigers Clemson enters the game against Winthrop with a 6-1 overall record after sweeping Pacific over the weekend by a combined score of 17-10. The Tigers have won 22 of their last 23 home games dating back to last season.

The team is hitting .308 with a .396 on-base percentage. Brad Chalk leads the way with a .481 batting average and .576 on-base percentage after going 8-for-12 in the Pacific series. Doug Hogan is hitting .444 with four of the team’s eight homers, while Marquez Smith is hitting .345 with two home runs and a team-high nine RBIs. Smith also has eight of the club’s 11 two-out RBIs this season.

The pitching staff has a 2.47 ERA and .241 opponents’ batting average. It has combined to strike out 66 against only 20 walks. Veteran relievers Stephen Clyne and Daniel Moskos have combined to allow no runs in 13.1 innings pitched this season. The Tigers are fielding at a .967 clip as well.

Limited Tickets Left for South Carolina Game Reserved seats for Saturday’s game against South Carolina at Doug Kingsmore Stadium are no longer available. There are a limited number of general admission tickets available to IPTAY members only. The ticket prices are $10 for adults and $8 for youths (high school age and under). Call 1-800-CLEMSON for ticket information.

Polls Clemson remained at the #2 spot in the Baseball America poll on Monday after going 4-0 in four games last week. Clemson also remained at #5 in the Collegiate Baseball poll. There will not be another Sports Weekly poll released until next week, as Clemson was ranked #2 in its preseason poll.

In over 45 percent of the innings this season, a Clemson opponent has reached base as the leadoff batter in an inning. Therefore, the success with runners in scoring position has been crucial to Clemson’s success. Meanwhile, Tiger batters are hitting .357 in that situation.

In the three-game series against Pacific on February 23,24, it was just 4-for-36 (.111) with runners in scoring position, as Clemson swept Pacific, including two one-run victories.

Chalk Riding 34-Game Streak Brad Chalk (Greer, SC) ended his sophomore season on a 16-game hitting streak and had three hits in the 2007 season-opener, upping his hitting streak to 17 games. Chalk has also reached base safely via a hit or walk in each of the last 34 games, showing his value as the #2 batter in the lineup.

Clyne Ups Scoreless Inning Streak to 23 Senior righthander Stephen Clyne (Parkland, FL) has not allowed a run in 7.2 innings pitched over two relief appearances this season. He has allowed just six hits and one walk with seven strikeouts. He also went the last 15.1 innings of 2006 without allowing a run, meaning he has a streak of 23 consecutive innings pitched over 11 relief appearances without allowing a run dating back to last season.

Clyne’s value to the team is as a long reliever, and he has done well in that role in his fifth season in the program. He has a 4-1 record, 2.67 ERA, and two saves in 38 career relief appearances (60.2 innings pitched). He has also allowed just one homer and 17 walks with 63 strikeouts, good for a 3.7 strikeout-to-walk ratio. Clyne is the only fifth-year senior on the 2007 team.

Clemson Sweeps Pacific in Battle of Tigers Clemson, ranked #2 in the nation, swept Pacific in three games on February 23,24 at Doug Kingsmore Stadium. Clemson outscored Pacific 17-10 and won two one-run games. Clemson hit .321 in the series to Pacific’s .271, as Pacific left 33 runners on base and was just 4-for-36 (.111) with runners in scoring position. Pacific also scored first in all three games only to see Clemson rally to victory each time. Brad Chalk was 8-for-12 to lead Clemson, while Doug Hogan (7-for-13) and Stan Widmann (4-for-8) also had productive series. Clemson pitchers also combined for a 1.86 ERA and 31 strikeouts in the three games.

In game-one on February 23, Clemson overcame a 3-0 deficit to defeat Pacific 8-3. Clemson scored three runs in the fifth inning to tie the score. A dropped foul ball by Erik Hamren in the fifth inning allowed Marquez Smith to single home the tying run. In the sixth inning, Clemson scored five runs, highlighted by Smith’s two-run single to cap the scoring. Hogan and Widmann added solo homers, while Chalk was 3-for-3 with two walks, meaning he reached base in all five of his plate appearances. Stephen Clyne pitched 5.1 innings in relief to earn the victory. He allowed just three hits, no runs, and one walk with five strikeouts.

In game-two, which was the first game of a doubleheader on February 24, Brad Chalk infield single in Clemson’s 4-3 victory over Pacific. Clemson matched Pacific’s two-run second inning with two runs in the bottom of the second on Widmann’s two-run single. Widmann had all three of Clemson’s RBIs. Clemson left 12 runners on base, while Pacific stranded 11. Pacific outhit Clemson 12-10, including four hits by Joe Oliveira, but Pacific could not come through with a clutch hit. Daniel Moskos earned the win thanks to 3.0 scoreless innings pitched in relief.

In game-three, which was the second game of a doubleheader on February 24, Smith’s three-run homer in the fifth inning was the difference in Clemson’s 5-4 win over Pacific. For the third straight game, Clemson faced an early deficit only to rally to victory. Pacific outhit Clemson 11-10, but it stranded 13 runners on base. Chalk paced Clemson with a 3-for-3 performance, while Hogan added two hits and an RBI. David Kopp did not allow an earned run in 5.0 innings pitched to earn the win, while Matt Vaughn picked up his first career save by pitching 2.0 scoreless innings with three strikeouts.