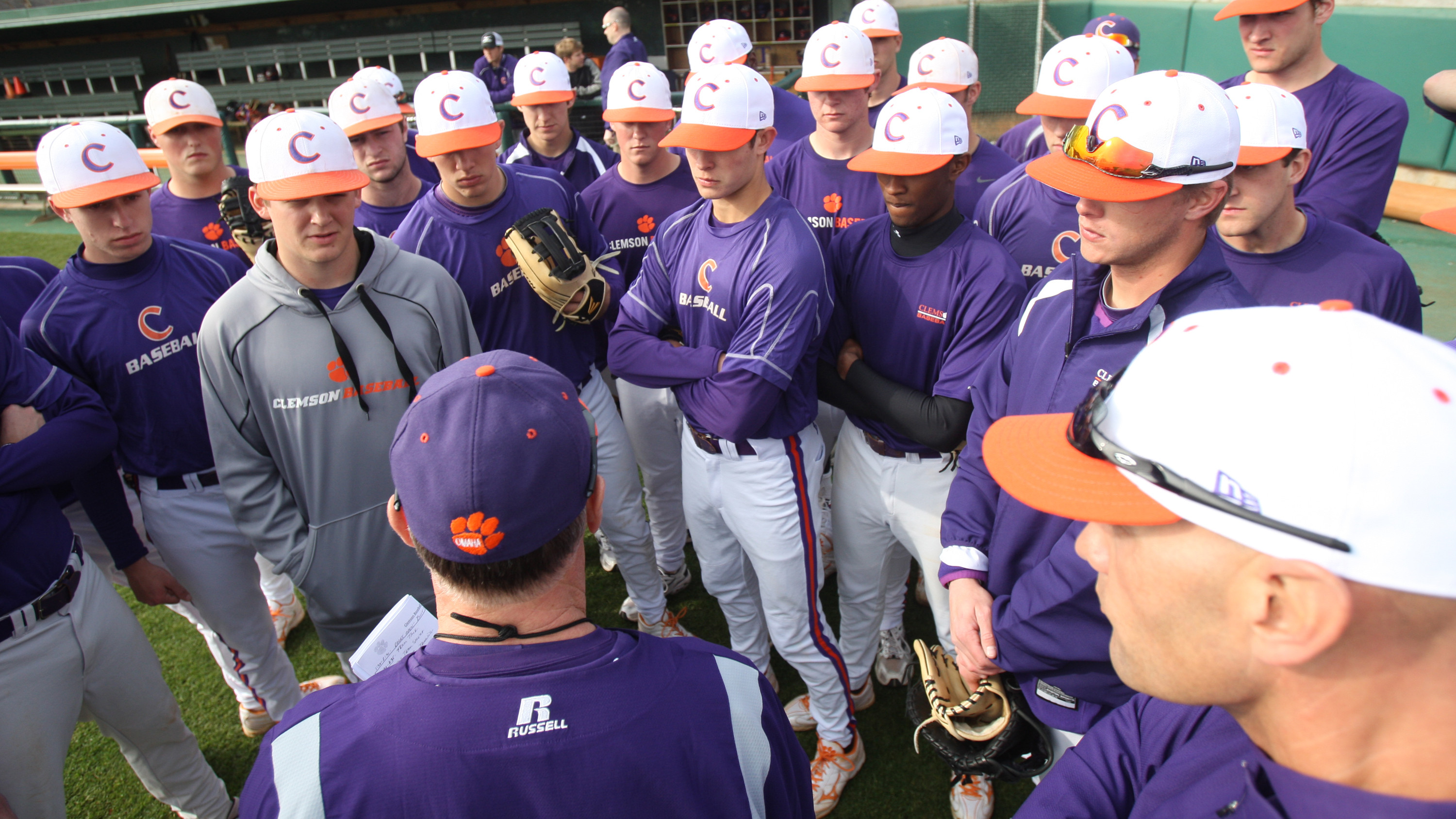 CLEMSON, SC – With Clemson picked to finish third in the Atlantic Coast Conference Atlantic Division by the league’s coaches and unranked in the Collegiate Baseball preseason poll, some might say the Tigers are coming into the 2013 season with tempered expectations.

Jack Leggett isn’t one of them.

“Well, I don’t expect that,” the Clemson head coach said. “I told these kids the other day, ‘Everybody asks how many games you’re going to win. I always think we’re going to win every game, and I go into the season thinking we’re going to be 56-0.’ Every single time we go out on the baseball field, we expect to win.”

Clemson opened preseason practice Saturday after inclement weather pushed that start back a day, and the team met with the media Monday to preview the season, which officially begins Feb. 15 with the first of a three-game home stand against William & Mary.

Losing five starting position players – including first-round pick and All-American first baseman Richie Shaffer – and three starting pitchers off a team that finished 35-28 overall and saw its season end in the Columbia (S.C.) Regional, Clemson will look to an influx of young talent in hopes of bettering that finish this time around.

“It’s actually been a really good group,” senior right-hander Scott Firth said. “We’ve got a lot of young guys, but they have meshed really well with the older guys. We’ve got a couple guys who are old enough and have been around the block a couple times, and just enough young guys who might be crazy enough to follow us around.”

In the lineup, Thomas Brittle is the Tigers’ top returning hitter (.298 average), while Steve Wilkerson is the leading returning run-scorer (49) and Jon McGibbon the top returning home run hitter (5). Those three are expected to hold down the center field, second base and first base spots, respectively.

“I feel good about our sticks this year,” Wilkerson said. “Honestly, I have a better feeling about them this year than last year. We’ve got a lot of guys that are good contact hitters, and Coach Leggett (likes) more of the style of line drives and getting people on base and running around. So, I think our bats this year will fit in pretty good with our system.”

In terms of freshmen who will push for playing time in the field and at bat, Leggett pointed to outfielders Steven Duggar and Maleeke Gibson and middle infielder Krieger, whom he indicated has a chance to be the starting shortstop, while junior JUCO transfer Shane Kennedy is another newcomer who could provide some pop in the lineup at third base.

“I think we’ve got some good freshmen that have got a chance to make a splash for us, and I’m excited about what they’re capable of doing,” Leggett said.

As far as the rotation, Leggett said sophomore Daniel “Goose” Gossett has the inside track at being the No. 1 starter after finishing last season in that role.

“If we had to start a game today, he’d be our Friday night guy,” Leggett said.

Pitching coach Dan Pepicelli, meanwhile, said he wouldn’t count out Firth as a guy who could push for that top spot, while he also pointed to senior Jonathan Meyer, junior Kevin Pohle and freshmen Matthew Crownover and Zack Erwin as factors in the rotation.

“It’s healthy right now to keep it competitive,” Pepicelli said. “We’ve done that not just with pitchers, but with position players as well. We want to make sure the preseason and the fall are extremely competitive, right up until opening day.”

Firth is the top returnee in terms of ERA (2.09), while Gossett is the leading veteran in innings pitched (77) and strikeouts (87).

“We’re really excited; we’ve got a great bullpen and great starters,” Gossett said. “It’s not clear-cut who’s going to be starting on the weekends yet, but I feel like we’re going to be real strong, especially out of the bullpen. … We’ve got a bunch of returning talent and all these new guys that we’re hyped to see what they can do on the mound.”

On the back end, Pepicelli said he expects right-handers Matt Campbell and Patrick Andrews to “kind of work together” in helping the team close out games initially.

As the Tigers continue their preparations for a schedule that will see them play 21 of their 56 games against teams that made the 2012 NCAA Tournament, Leggett was quick to admit they had “question marks” and would need big contributions from some newcomers in order to thrive.

Still, entering his 20th season with the Tigers, Leggett sounded confident his team is capable of doing just that.

“I don’t know if I can say we’ve been this young in a long time,” Leggett said, “but the young players that we have, they’re a cut above. They’re special kids. They’re hard workers. They’re highly motivated. They’re champions. They want to win, and they have been practicing like they want to win – right from the beginning.”

“With that said, we have some good guys coming back. We don’t have a whole lot of home runs back from last year’s team. The bats have changed and the game has changed a little bit and you have to change with the times. We have to be able to bunt, run, hit and run, run the bases very well, play good defense, and pitch in order to win.”

On the team’s power:“Jon McGibbon is a player who has some power. Shane Kennedy is a guy I think could hit in the middle of the lineup. Steve Wilkerson is a guy who could hit a couple home runs as well. For the most part, we just need to put the ball on the ground and run and play good defense and pitch and be fundamentally sound.”

On the team’s expectations:“I told these players the other day…I always think we are going to win every game. Going into the season, we are going to be 56-0. Going in to every single game, I expect to win.

• 1B • Jr.“I’m really excited about this upcoming season. We have a lot of new guys, but everyone is stepping in and doing what they need to do to make the team better.”Jon McGibbon

On replacing power from last year:“Obviously, it does effect us to lose guys like Richie Shaffer, Phil Pohl, and Jason Stolz. We have a lot of guys who are going to be ready to step in and play…not necessarily hitting the ball with power, but just being able to make contact with the ball and drive guys in.

“We don’t have as much power as we did last year. Our main focus is trying to hit the ball hard on the ground and on a line somewhere and driving guys in.”

On flying under the radar:“Coming in, we have seen all of the rankings, but none of that stuff really matters to us. It’s about us and no one else, and we are going to do whatever it takes to win.”

• RHP • Sr.“It’s a fun and exciting time. I think everyone has the itch to get ready and get together as a whole team and see what we have. We’re definitely getting ready for it.”Scott Firth

On his personal expectations:“It’s my last year of eligibility, but it hasn’t really crossed my mind. I want the team to do well, and whatever I need to do to make that happen is what I will do. I’m not sure if that’s weekend rotation or bullpen. I’m willing to help the team any way I can.”

On mixing with the younger players:“It has been a really good group so far. We have a lot of young guys, but they have meshed really well with the older guys. We have a couple of new guys who are old enough and have been around the block a few times. Hopefully, everything will work and mesh and evolve as the season goes on. It’s definitely been a fun group to be around so far, so I’m looking forward to that.”

On the mix of experience on the pitching staff:“There is still some experience on the pitching staff. We have guys who have pitched in big games and succeeded in big games. We also have some young guys with some really explosive arms and good stuff in general. Hopefully, between the young guys who are coming in competing for jobs and the older guys who have been through it, we should have a balanced, deep staff.”