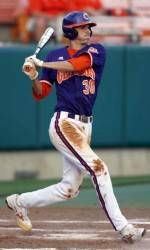 Clemson Baseball Feature: The First Baseman with a Fastball – Will Lamb

A sophomore from Seaford, Va., valuable two-way player Will Lamb has cemented his spot in the Tigers’ starting lineup this season. Nicknamed Lambo-Leap by his teammates, he is the tallest player on the roster and probably one of the most versatile. His love for baseball, which started many years ago, is obvious to anyone who has seen him play or heard him talk about the game.

Lamb began playing baseball after his dad, a football coach, signed him up for tee ball. His dad has told him that even as a young kid he always wanted to play baseball. Part of his passion for the sport comes from his dad, who has been one of the major influences in his baseball career.

“My dad coached me all the way up to high school. He’s taught me to play hard, never give up, and play to the last out,” said Lamb. “Effort shows up every day. Have fun with it.”

Lamb remembers how much fun it was playing all-star baseball as a nine- or 10-year-old and how much he enjoyed the competitiveness of the sport. It was then that he knew he was in for the long haul and that he wanted to begin the rigorous journey of becoming a professional athlete.

“We went to state my nine-year-old year, and I was enthralled with the game,” Lamb said. “That was the year I knew that I wanted to do this for the rest of my life.”

His parents are extremely supportive of his career as a student-athlete, and as most parents would, they regularly check to make sure he is keeping up with his grades and other schoolwork. Lamb knows that time management is important in maintaining both school and baseball. His hard work ethic is an attribute that stands out to his coaches.

Lamb has shown a tremendous amount of energy and effort since he came to Clemson last year. In his first appearance on the mound for the Tigers, he pitched a perfect inning in relief. In his first career start on the field, he went 3-for-4 with two RBIs, a walk and two steals. He continued to improve throughout the season, playing centerfield and pitching numerous successful innings in relief.

Although he only made brief appearances in the regional games at the end of the season, he counts the Tigers’ rally from behind after a loss to Oklahoma State in the double-elimination tournament as a most memorable moment.

“That was one of the highlights of my baseball life,” Lamb said. “The atmosphere [of the final game] and how we came back and never gave up was one of the coolest moments I’ve experienced.”

This season Lamb has become Head Coach Jack Leggett’s go-to guy at first base. He has been outstanding it the position all year and became even more valuable in the field and as a hitter when Richie Shaffer was injured on March 30. He is hitting .310 for the season with two home runs and 28 RBIs. He has also contributed 13 stolen bases in 13 attempts, the best percentage on the team.

And, most importantly, he has made a big impact as the leadoff hitter recently. “The leadoff spot has been an area where we have looked for a consistent player all year,” said Tigers hitting coach Tom Reginos. “Recently Will has given us a good lift there and hopefully he can provide that offensive spark the rest of the year.”

“Two-way players have a rough life,” said Lamb. “You are always doing two times the amount of work in one day. It’s strenuous.”

It is difficult to succeed in both areas at the same time. Clemson has a history of all-around players, including Jimmy Key, who was first-team All-ACC as a DH and a pitcher in the same year, the only Clemson player to be All-ACC at two positions in the same year. Key went on to success in the Major Leagues as a pitcher, but he hit .325 with 10 home runs and 86 RBIs in his Clemson career.

Even after admitting to the difficulties of being a two-way player, Lamb insists that he loves the challenge. As to whether he prefers pitching or playing first base, “It’s a tossup,” he said. “I love hitting and I love running, but I also love pitching and being on the mound because then I control the game.”

On the other hand, there are a few things that Lamb says he would like to improve, including staying through the ball while batting. He is also working with Coach Pepicelli on strengthening his pitching variety.

“I’m working on a slider and a changeup to go with my fastball,” said Lamb. The coaches have already noticed the improvements he has made this season, and are allowing him more playing time to hone his skills. His hard work ethic is apparent in his consistent performances at the plate and on the mound.

“I’m very happy with how he has progressed since the fall,” said Coach Pepicelli. With his determination, driven talent and versatile skills, Lamb will most likely continue to start for the Tigers in years to come. He also has the potential to be able to play baseball after college. “It’s always been my dream [to play in the major leagues],” Lamb said.

And the best way for him to get there is by following his own advice: “Keep at it. There are ups and downs, but it’s a great game. Keep at it, and don’t give up,” said Lamb.

He has his work cut out for him this season and may be in for an exhausting few months, but if anyone can get the job done, it’s Lambo-Leap.