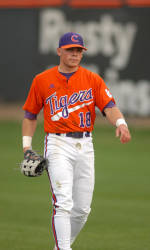 “This is the longest stretch of time I have ever gone without playing baseball since I started playing the game,” said Addison Johnson in an interview in late January.

He was referring to his lost 2008 season when he suffered a pulled hamstring and broken hand and never appeared in a game for the Tigers.

Johnson, a red-shirt sophomore from Pfafftown, NC, did great things for the Tigers as a first-year freshman in 2007, both in the outfield and from the batters’ box. Johnson hit .286 with 35 runs, eight doubles, five triples, one home run, 23 RBIs, and eight stolen bases in 61 games, including 58 as a starter. He helped the Tigers to the NCAA Tournament and a top-15 final national ranking by every poll.

Johnson led the team and was fifth in the ACC in triples. He was especially effective against the ACC with a .309 batting average, one of the best on the team, in league play. His regular season included a walkoff double to beat Georgia on April 4 and his first career home run on Saint Patrick’s Day against Duke.

He was most effective in the 2007 NCAA Tournament when he had eight hits in 17 at-bats for a .471 batting average, leading Clemson to the Starkville (MS) Super Regional. He had three walks and was hit by a pitch to give him a .571 on-base percentage for the five games he played against NCAA competition.

“My freshman year could have been better, but I just enjoyed getting to play,” he said.

As a result of this fine 2007 season, he was rated among the top-25 sophomores in the nation according to Baseball America entering the 2008 season.

Johnson was slated to be the starting centerfielder for the duration of the 2008 season. He had also starred in the Cape Cod League during the summer of 2007.

But just prior to the season, Johnson sustained an injury in his hand. In an effort to recover from the damage as quickly as possible, his hand was treated with bone stem for one month. Eager to play after just one month, he came back on the field during a scrimmage, only to suffer a stress fracture in the same hand. Just one month in and his 2008 season was over.

“After sitting out the opening two weeks with a lingering hamstring pull, Johnson believes he suffered the stress fracture by spending too much time in the batting cage trying to stay sharp,” said The State’s Paul Strelow. “Johnson decided to undergo surgery in hopes of preventing the injury from flaring up later in his career.”

Baseball began at a young age for Johnson. He started in Little League at age 10 and was on an AAU team by age 12. Not only did he play AAU baseball, he won national recognition with his team in the 12-year-old division. At age 15, he started playing in showcases in hopes of being noticed by college scouts.

“I chose Clemson because of the coaching staff, the excellent baseball atmosphere, and the academics,” he stated.

Johnson is a management major at Clemson. He found out quickly that academic success would require much more work inside and outside the classroom than he had ever given before.

“I have learned and made adjustments,” he added. “In every semester, I have improved my GPA.”

Johnson made the academic honor roll for the first semester this year, one of a record 24 Tiger baseball players who made at least a 3.0 GPA in the classroom, contributing to a team-record 3.07 GPA for the semester.

Outside of the classroom and in terms of baseball, Head Coach Jack Leggett has influenced Johnson’s baseball career the most. “He is very knowledgeable of the game and has many years of experience,” Johnson said. “He is an intense coach and always has a way of motivating players to do better.”

Along with Leggett, all of the baseball coaches at Clemson are very dedicated, as described by Johnson. “They do everything possible to teach us every aspect of the game and they all share the same goal…getting to Omaha to win a National Championship.”

Leggett is very excited to have Johnson back in the lineup and believes his presence will help the Tigers return to the NCAA Tournament in 2009. “We missed his enthusiasm last year in addition to his bat and fielding ability,” said Leggett in regards to Johnson. “He stirs up our offense and we are glad to have him back on the field.”

As a result of the injured hand, Johnson did not get to play summer ball. Now that it is February, his time has come. He is looking forward to Clemson’s opening game with Charlotte on February 20.

“I am excited and anxious to be back on the field,” commented Johnson. “I am ready to be back in the swing of things.”

It is obvious that being away from the game has only made him want to play more. “This season is going to be a lot better than my freshman year. This season, we are going to take things to the next level.”