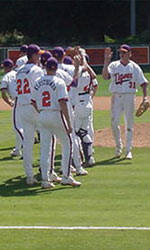 Clemson, SC – Coming off a season in which it reached its third straight Super Regional, the Clemson baseball team ended the regular season ranked 13th in the final Collegiate Baseball poll, released on Monday.

Clemson finished with a 41-22 record after placing second in the ACC and sweeping through the Clemson Regional before falling to Miami (FL) in Super Regional play in Coral Gables, FL. The Hurricanes went on to win the College World Series on Saturday with a 12-1 victory over Stanford.