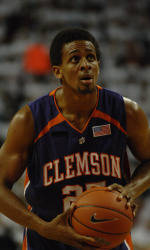 Clemson Back in Associated Press Top 25

Clemson, SC-After wins over Miami (FL) and Maryland last week, Clemson has returned to The Associated Press Top 25. Clemson is ranked 24th in the nation, the first top 25 appearance in the AP poll since January 14, 2008. It is Clemson’s first top 25 ranking in the AP poll in the month of March since March 10, 1997 when Clemson as 14th in the final AP poll that year.

Clemson was ranked nine consecutive weeks by AP and 10 consecutive weeks by the USA Today Coaches poll earlier this year. This year marks the first time in history that Clemson has been ranked in the top 25 of either poll, moved out of the poll for at least two weeks, then returned to the poll. This is just the sixth year Clemson has been ranked in the month of March. The other seasons are March of 1975, 1977, 1987, 1990 and 1997.

Clemson is one of three ACC teams ranked in the AP top 25 this week. North Carolina, who beat Clemson twice this year in overtime, is ranked number-one in both polls. Duke is number-five in USA Today and sixth in AP. One of Clemson’s victories this year is against Purdue, who is ranked 15th in both polls this week. Clemson also defeated SEC West champion Mississippi State earlier this year. The Bulldogs are ranked 25th in the USA Today poll this week.

Clemson is coming off a 73-70 win over Maryland in College Park, MD on Sunday. Clemson overcame a 20-point deficit with 11:21 remaining to gain the victory. Freshman Terrence Oglesby hit a 25-foot three-point shot from the right wing with 2.3 seconds left to provide the winning margin.