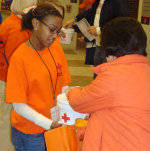 Clemson Athletics Collects Over $6,100 in Donations for Haiti Relief Fund

Volunteers from the Student-Athlete Advisory Committee and the Undergraduate Student Government were stationed around Littlejohn Coliseum prior to tip off of the basketball game. The volunteers collected $6,119.30, all of which will be provided to the American Red Cross and designated for the Haiti Relief Fund.

“Clemson students and the Clemson community wanted very badly to contribute to Haitian Relief Efforts and we were fortunate we could utilize such a big event on campus to publicize our efforts. Student Government is very pleased that the donation collection went so well,” said Student Body President Abby Daniel. “Hopefully the gameday giving will be just a start to the overall contributions that Clemson makes.”

“When I first heard about the earthquake in Haiti, I immediately felt that Clemson as a student body could help to ease the pain of those suffering,” said cross country and track & field team member and SAAC volunteer Chris Slate. “I was shocked that we were able to collect over $6,000. I was hoping for half of that. The fact that we raised so much just goes to show the kind of moral fiber that the students and fans at Clemson are made of.”

“I would like to thank the students and staff that were involved in the organization of the Haiti Relief collection at the Duke game. I know this took a lot of effort and it is greatly appreciated,” said Athletic Director Dr. Terry Don Phillips.

“The Clemson family, like so many others, are deeply saddened by this tragedy,” said Vice President for Student Affairs Gail DiSabatino. “I am pleased by the leadership of our students who want desperately to help and raising money seems to be the most important effort that can be made at this time. Clemson will continue to work on longer term efforts, as the people of Haiti will need assistance down the road as well.”

“The American Red Cross is grateful for the generous support of the Clemson University family during this crisis,” said Sarah Dow, Director of the American Red Cross of Pickens County. “Their contributions will touch the lives of hundreds of people in Haiti by providing much needed relief to the victims of the earthquakes. For instance their gift will provide 240 families of five with a kitchen set giving them the ability to cook and serve food. This includes two cooking pots, a frying pan, bowls, plates, cups, and utensils.”