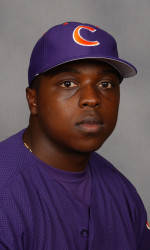 The Clemson at Virginia Tech baseball game on Friday was suspended in the middle of the fifth inning with the Tigers leading 5-1. Snow flurries and heavy winds rolled onto and over English Field during the first inning. The snowfall increased in intensity throughout the first five innings. After several players had trouble seeing the ball in the air and the accumulation of snow covered the field, the umpires decided to suspend play. The game will be picked up at its stopping point at 1:00 PM on Saturday. Game-two of the three-game series will start approximately 30 minutes after the conclusion of the halted game on Saturday.