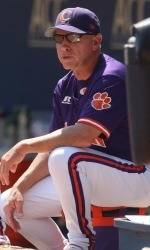 Thirty-five home games, 27 games against 2011 NCAA Tournament teams, and two games at Fluor Field in Greenville, SC highlight Clemson’s 56-game, 2012 regular-season baseball schedule, released on Wednesday. The Tigers will also play South Carolina in a three-game series at three different sites over one weekend during the first weekend of March.

Twenty-seven of Clemson’s 56 regular-season contests (48 percent) will be against teams that participated in the 2011 NCAA Tournament. Nine of the 26 non-conference matchups will be against 2011 NCAA Tourney teams, games against Maine (3), South Carolina (3), Georgia (2), and Coastal Carolina (1). The Tigers will face conference foes Florida State, Georgia Tech, Miami (FL), North Carolina, N.C. State, and Virginia, also teams that played in the 2011 NCAA Tourney. Clemson will not face Virginia Tech during the regular season.

On the weekend of March 2-4, the Tigers will face rival South Carolina three times. On Friday night, March 2, Clemson will play the Gamecocks at Joseph P. Riley, Jr. Park in Charleston, SC. The two teams began the three-game format at three different sites in 2010. In 2010 and 2011, the two teams played their neutral-site contest at Fluor Field in Greenville, SC. On Saturday, March 3, the two teams will meet at Carolina Stadium in Columbia. Then on Sunday, March 4, the Tigers and Gamecocks will conclude their regular-season series at Doug Kingsmore Stadium.

On March 7, the Tigers will play their first midweek game of the season against Holy Cross. In their only previous meeting, the Crusaders downed Clemson 17-4 in the 1958 College World Series.

Clemson will open up league play when it hosts North Carolina from March 9-11. The Tigers are slated to play nine games against 2011 NCAA Tournament teams in their first 13 contests of the season. Boston College (March 16-18) will travel to Tigertown to face Clemson the following weekend, then the Tigers will play Elon on March 20 at Doug Kingsmore Stadium and March 21 at Fluor Field.

The Tigers will take to the road for the first weekend series of the season at Virginia from March 23-25, then they will play at Georgia on March 27.

Home series against Miami (FL), who the Tigers have not faced since 2009, and N.C. State are up next, sandwiched around a road series against Duke at Jack Coombs Field. Clemson will then travel to Maryland and Georgia Tech in late April, while Clemson will host Coastal Carolina in between those two series.

After a week off for final exams, Clemson will have an eight-game homestand in May, beginning with a three-game series against College of Charleston from May 5-7. The following weekend (May 12-14), ACC Atlantic Division rival Florida State will travel to Doug Kingsmore Stadium, then the Tigers will conclude the regular season at Wake Forest from May 17-19.

The Tigers will also play non-conference, midweek home games against Charleston Southern, Furman, Georgia, Presbyterian College, Tennessee Tech, Western Carolina, and Winthrop. The Winthrop game on April 3 will mark the return of former Tiger Assistant Coach (2003-10) and current Eagle Head Coach Tom Riginos to Clemson. The Tigers will also play a non-conference, midweek road game at Western Carolina along with a neutral-site game against Furman at Fluor Field on April 10.