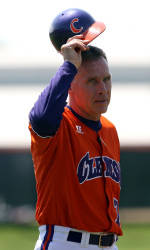 Twenty-seven of Clemson’s 56 regular-season contests (48 percent) will be against teams that participated in the 2009 NCAA Tournament. Twelve of the 26 non-conference matchups will be against 2009 NCAA Tourney teams, games against South Carolina (3), Wright State (3), Elon (2), Georgia (2), Coastal Carolina (1), and Georgia Southern (1). The Tigers will face conference foes Boston College, Florida State, Georgia Tech, North Carolina, and Virginia, also teams that played in the 2009 NCAA Tourney. Clemson will not face Miami (FL) during the regular season.

Clemson will open up league play against N.C. State (March 12-14) and Virginia Tech (March 19-21) at home, then the Tigers will take to the road for the first weekend series of the season at Virginia in late March. The Tigers have not met the Cavaliers during the regular season since 2007 and have not played in Charlottesville since 2006. After playing host to Boston College the following weekend, four of the next five ACC series will be on the road, series at Duke, Georgia Tech, Maryland, and Wake Forest sandwiched around a home series against North Carolina. Clemson will close its regular-season slate against Florida State at Doug Kingsmore Stadium.

Clemson will play a weekend series against Wright State at Doug Kingsmore Stadium in late February and another home game against Dayton in early March. It will feature Clemson’s first-ever meetings against the two teams from Ohio. The Tigers will then face rival South Carolina three times. On Friday night, March 5, Clemson will host South Carolina. The following day, the two teams will meet for the first time at Fluor Field and the first time in Greenville since 1990. Then on Sunday, March 7, the Tigers and Gamecocks will conclude their regular-season series in Columbia.

The Tigers will also play midweek home games against Gardner-Webb (1), Georgia Southern (1), Elon (2), Coastal Carolina (1), Georgia (1), Western Carolina (1), South Carolina-Upstate (1), and Presbyterian (1). Clemson will play non-conference, midweek road games at Charlotte and Georgia. The Tigers have not traveled to Charlotte to play the 49ers since 1988. Starting with the two-game, midweek series against Elon on March 23, the Tigers will play 11 consecutive games against teams that played in the 2009 NCAA Tournament.

Clemson will play Florida Gulf Coast for the first time in history in a four-game series after final exams in early May. It will be Clemson’s first four-game series since 1996. The Tigers will also play their last of three games at Fluor Field against Furman on May 11.