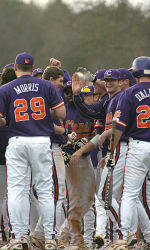 Clemson also released the radio announcers for Tiger baseball on Wednesday. Don Munson will be the play-by-play announcer on all 36 Clemson Tiger Sports Network broadcasts. Munson is in his fifth year calling Tiger baseball games.

Color commentator Bob Mahony, who has been a part of Clemson baseball broadcasts for the past 20 seasons, will call the road game at South Carolina on March 1, the home game against Georgia on April 2, and the road game at South Carolina on April 9 along with home ACC series against N.C. State (March 21-23), North Carolina (April 11-13), and Virginia Tech (April 25-27). Mahony will also be on the air during Clemson’s three-game series at Maryland (March 28-30) and Georgia Tech (May 9-11).

The other 18 Clemson Tiger Sports Network broadcasts will feature Dan Scott as color commentator, which includes road ACC series at Wake Forest (March 7-9), Miami (FL) (April 4-6), and Duke (April 18-20) along with home ACC series against Boston College (March 14-16) and Florida State (May 3-5). He will call the March 2 home game against South Carolina, April 1 road game at Georgia, and April 16 home game against South Carolina as well.

The other 20 regular-season games that will not be carried by Clemson Tiger Sports Network will be broadcast exclusively by Scott and WCCP (104.9 FM) out of Clemson. Its schedule includes games against Central Florida (3), Mercer (3), College of Charleston (2), Elon (2), Furman (2), North Carolina-Greensboro (2), Western Carolina (2), Coastal Carolina (1), High Point (1), Presbyterian (1), and Wofford (1). Therefore, Scott will be a part of 38 broadcasts during the regular season.

Munson and Scott will team up for all of the Tigers’ postseason games on Clemson Tiger Sports Network. The broadcasts will begin 15 minutes prior to the start of each contest, and they will have comments and strategies from Clemson Head Coach Jack Leggett. The games are subject to be tape-delayed based on schedule conflicts with Tiger basketball games.