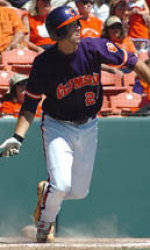 Clemson, the 2006 ACC Regular-Season and Tournament Champions, will open the season with nine consecutive homes games and 17 of its first 18 games at Doug Kingsmore Stadium. George Mason will come to town from February 16-18 to open the slate, High Point will take on Clemson in Tigertown on February 21, then Pacific will travel eastward to take on the Tigers the following weekend (February 23-25).

After a Wednesday game against Winthrop on February 28, Clemson and South Carolina will play the first two of four games. On Saturday, March 3, the two will play at Doug Kingsmore Stadium, then Clemson will make the return trip to Sarge Frye Field on Sunday, March 4.

Clemson will hit the road for 12 of its next 19 contests. The Tigers will play at Western Carolina on March 20 before traveling to College Park to take on Maryland from March 23-25. Clemson will then play its first of three five-game weeks. Gardner-Webb and Western Carolina will face the Tigers at Doug Kingsmore Stadium on March 27,28, respectively.

The Tigers will play host to Miami (FL) from March 30 to April 1. Clemson is 7-0 against the Hurricanes since they joined the ACC in 2004. A home-and-home, midweek series with Georgia is scheduled for April 3,4, with the Tuesday game at Foley Field in Athens, GA.

Two ACC road series are sandwiched around a home game against South Carolina on April 11. Clemson will travel to Virginia Tech from April 6-8 before playing at Wake Forest from April 13-15. The following Wednesday on April 18, Clemson will play the last of four games against the rival Gamecocks.

A 12-game homestand will be up next, beginning with a three-game series against Virginia from April 20-22. Elon and Wofford will come to town on April 24,25, respectively. Georgia Tech will visit Doug Kingsmore Stadium from April 27-29 before the Tigers have five days off for final exams. The two border rivals played seven times in 2006.

Boston College will make its first-ever appearance on the diamond at Clemson on May 5,6. The two teams will play a doubleheader on Sunday, May 6 starting at 2:00 PM. Then Furman will travel westward on May 9 to close out the 12-game homestand.

Clemson’s final two weekends will be on the road against Atlantic Division foes, including a three-game set at Florida State from May 11-13. After playing host to College of Charleston on May 15, Clemson will travel to N.C. State to close out the regular season from May 17-19. Fifteen of the Tigers’ final 20 regular-season games will be against teams that played in the 2006 NCAA Tournament.

For the second straight season, the Tigers will not face North Carolina. The two teams will play each other during the regular season every year between 2008 and 2017.

The top eight teams in the ACC standings will participate in the ACC Tournament at the Baseball Grounds of Jacksonville (FL), where it was held for the first time in 2006.