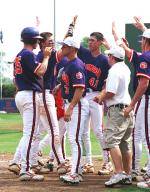 The Tigers will open the season at the Baseball at the Beach tournament at Myrtle Beach, SC from February 18-20. Clemson will play one game apiece against West Virginia, Coastal Carolina, and East Carolina. Clemson will return home the next weekend and play 2004 NCAA Tourney team California-Irvine in a three-game series at Doug Kingsmore Stadium. The next two weekends will feature games against SEC powers Auburn (away) and home-and-home games against South Carolina. The Tigers and Gamecocks will also square off again on consecutive Wednesdays in mid-April.

Clemson will play additional non-conference games against Winthrop, Furman, Coastal Carolina (two games), Georgia, Western Carolina, Elon, Wofford, and College of Charleston at home. The Tigers will travel to Old Dominion during Spring Break for a two-game series, play at Georgia on April 5, and play at Western Carolina on April 12.

Along with the eight returning ACC opponents, Clemson will play a three-game series at Virginia Tech and will finish the regular season with a series against Miami (FL) at Doug Kingsmore Stadium. Clemson will also play home ACC series against North Carolina, Duke, Virginia, and Georgia Tech, and play road ACC series at Maryland, Florida State, N.C. State, and Wake Forest. Clemson will play 30 conference games in 2005, six more than the 24-game schedule of years past.

The 2005 ACC Tournament will travel back to the state of Florida for the first time since 2002, this time to the Baseball Grounds of Jacksonville (May 24-29). The ACC Tournament was also held in Florida in 1997 and 2002, both in Saint Petersburg.