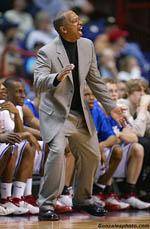 “This is obviously a very challenging schedule,” said Purnell, who is currently in Puerto Rico as an assistant coach with the United States National team. “When you look at the quality of our non-conference opponents along with the normal difficulty of the ACC round robin, we will have to be ready to play every night out,” said Purnell. “I believe it is a schedule that will force our team to improve as the year progresses. We play teams from the SEC (twice), the Big East, Conference USA and the Big Ten in December.

“Playing that caliber of opposition in December will certainly get our players ready for the ACC. Playing at Purdue and at Cincinnati will be a great preparation for going on the road in the ACC. It is the kind of schedule that will challenge our players and excite our fans. The series with Georgia should be of particular interest to our fans because there is such a strong rivalry between the two schools.”

The Tigers will open their 2003 campaign with two exhibition games prior to Clemson’s final home football games. On Friday, Nov. 7, Clemson will face Nike in a 7:00 PM tip prior to Saturday’s Florida State football game. EA Sports returns to Clemson on Friday, Nov. 14, for another 7:00 PM tilt. The Tiger football team will face Duke on Nov. 15 in its final home game of the season.

Clemson will play nine of its first 12 games at home, including a three-game home-stand that will begin with the season-opener against Gardner-Webb on Friday, Nov. 21. In-state rival South Carolina will play in the renovated Littlejohn Coliseum on Dec. 6 at 7:00 PM in a Fox Sports Net South broadcast following the Tigers’ Dec. 3 trip to Purdue to take on the Boilermakers in the 2003 ACC-Big East Challenge.

Clemson holds a 2-0 record against Purdue, with both victories earned in overtime. The Tigers and Boilermakers first met in 1972 at Littlejohn Coliseum, when the Tigers won 72-66 after regulation ended with the teams tied 62-62. Denny Odle scored 10 points in the extra period to give Clemson the win. In the second meeting between the teams in 1974, Clemson hit two free throws with seven seconds on the clock to pull off an 81-80 win over Purdue in West Lafayette, IN.

Clemson will travel to Atlanta to play Georgia at Phillips Arena in the Chick-Fil-A Peach Bowl Classic, an event slated for Dec. 13. The Tigers and Bulldogs last met on the hardcourt in the NIT in 1999, a game that the Tigers won 77-57 at Littlejohn Coliseum, but it will be the first regular season meeting since 1964-65.

The game will feature two first-year coaches in Purnell and Georgia coach Dennis Felton, who was an assistant at Clemson from 1994-98 under Rick Barnes. On Dec. 17, the Tigers will travel to Cincinnati to face Bob Huggins’ Bearcats, a team Clemson defeated at the Civic Center of Anderson last season. The Cincinnati game is only one of two Wednesday night games for the Tigers in 2003-04, with the only other Wednesday night game against NC State on Feb. 18. A Dec. 30 match-up against Boston College will wrap-up the Tigers’ pre-conference schedule.

Duke will travel to Littlejohn Coliseum on Jan. 3 to open Clemson’s ACC slate in a game to be nationally televised on Fox Sports Net. This is the third consecutive year that Clemson has opened its conference schedule with the Blue Devils. The Tigers’ 2004 conference schedule will include back-to-back road games only once this season, when the Tigers travel to NC State on Jan. 17, then play at Virginia on Jan. 20. Clemson’s regular season finale is Tuesday, Mar. 2 at North Carolina. Clemson will have at least nine days to prepare for the 2004 ACC Tournament, which will be played in Greensboro, NC.