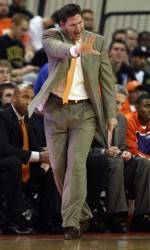 Clemson and Wofford to Meet Monday Night at Littlejohn Coliseum

QUICK FACTS * Clemson and Wofford will meet on the hardwood for the 67th time in the history of the series Monday evening. The Tigers have won 13 of the last 14 in the series and hold an all-time edge of 50-16 over the Terriers. * The Brad Brownell era began Friday with a successful result, as the Tigers took care of Western Carolina by a score of 87-64. Brownell improved to 2-1 all-time in opening games at different coaching stops. * Speaking of Brownell, the coach will be celebrating his 42nd birthday on Monday night when the Tigers take on Wofford. * Clemson got a well-balanced effort offensively in the win over the Catamounts. Four players scored double figures, led by Devin Booker with a career-high 16 points. Milton Jennings matched a career-high with 14, while adding four rebounds, four assists and two blocks in 21 minutes of action. * Clemson has now won its last 26 season openers. The Tigers last lost on opening night in 1984 to Tennessee Tech. * The Tigers shot 59.6 percent from the field in the win over Western Carolina, including 62 percent in the second half. * Clemson holds a record of 33-1 in the month of November since the start of the 2005-06 season. The Tigers’ only loss during that time was to Texas A&M last season in Anaheim. * Wofford traveled to Minnesota on Friday, but the Golden Gophers sent the Terriers home with a 69-55 loss. The Terriers struggled to 27 percent shooting in the opening half. Noah Dahlman, 2009-10 SoCon Player-of-the-Year, led Wofford with 15 points in the loss. * Wofford is the reigning Southern Conference champion. The Terriers compiled a 26-9 overall record last season and advanced to the NCAA Tournament for the first time in school history. * Demontez Stitt needs just 91 points to reach 1,000 for his career. Stitt played just 12 minutes in the season opener due to foul trouble. * Jerai Grant is currently eighth in Clemson history with 119 blocked shots. He needs eight to pass John “Moose” Campbell for seventh on the all-time list. * Andre Young hit a pair of three-point baskets against Western Carolina, giving him a total of 92 in his career. He needs just eight to reach 100. When he does, he will be the 16th player in school history to reach the century mark in three-point goals.