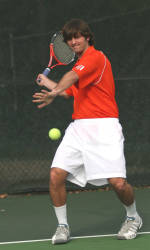 CLEMSON, SC – The Clemson men’s tennis team will play at South Carolina on Wednesday, March 25, at 2:00 p.m. at the Sam Daniel Tennis Facility in Columbia, SC.

This will be the 100th meeting between the two schools on the tennis courts. South Carolina leads the overall series 58-39-2. The first match played was in 1925. The two teams split the two matches played in 1925 as South Carolina won at Clemson 4-2 on April 13, and Clemson won in Columbia by the same 4-2 score on April 18.

Clemson has an overall record of 8-8 this season. South Carolina, ranked 19th last week, has a 13-3 record overall this season.

The Tigers are led by Ike Belk with a 13-6 record in singles. He also has an 8-3 record in dual matches. Carlos Alvarez has been playing number one singles for Clemson, and he has a 5-5 record at that flight this season.

The 2009 season marks the 100th year of men¹s tennis at Tigertown. Clemson first sponsored men¹s tennis in 1910 when two Tiger tennis players entered the annual state tournament. The first dual match Clemson played was in the 1921 season as the Tigers defeated Wofford 2-0 on April 28, in Spartanburg, SC.