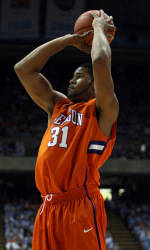 QUICK FACTS * Clemson and Georgia Tech will play for the 120th time in the series on Tuesday, the second time of the 2011-12 season. The Tigers won the first matchup at Littlejohn Coliseum by a score of 64-62. * Clemson has won two of the last three meetings over the Yellow Jackets in Atlanta, both at Alexander Memorial Coliseum. This will be the Tigers¹ first game at Philips Arena since playing Georgia at the facility in the 2003-04 season. * The Tigers are coming off their most lopsided loss in 60 games under second-year Head Coach Brad Brownell, a 22-point defeat at No. 8/7 North Carolina last Saturday. * Clemson is seeking its second straight regular season sweep of Georgia Tech. The Tigers have not accomplished the feat versus the Yellow Jackets since the 1979-82 era when Clemson won six straight over Georgia Tech when they first entered the ACC. * The Tigers have 100 steals through 12 conference games and lead the ACC with an average of 8.3 per game. Only Florida State forces more turnovers per game (15.2) than Clemson, who forces 15 per game by opponents. * Clemson leads the ACC in turnover margin in all games (+2.4) and in ACC games (+4.2). * Tanner Smith is just three assists shy of 300 for his career. He leads the Tigers this season with four per game, third-best in the ACC. * Smith has 18 assists and just four turnovers over Clemson¹s last four games, a stretch of 137 minutes. * Milton Jennings has made at least one three-pointer in four straight games, matching the longest streak of his career. * Andre Young has made 25 out of 39 from three-point range in his career against Georgia Tech, a 64 percent clip. Both figures are highs for the senior against any ACC team. * Young needs 17 three-pointers to pass former Clemson great Cliff Hammonds (244) for third all-time in school history. * Young is 15 points away from becoming one of the top 25 scorers in Clemson history. * Catalin Baciu needs two made field goals to double his career output his first three seasons combined (25). * Devin Booker has scored nine or more points in eight straight outings for Clemson, the longest such streak of his career.