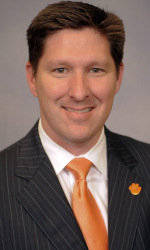 CLEMSON, SC – Clemson Athletic Director Terry Don Phillips announced Friday that Head Basketball Coach Brad Brownell has agreed to a contract extension that will add a year to his previous contract and enhance his compensation package by 33 percent to over $1.2 million per year. His contract now runs through the 2016-17 season.

“We could not be more pleased with what Coach Brownell and his staff accomplished in his first year,” Phillips said. “He did a great job assembling a tremendous staff. I have worked with a National Championship program at Arkansas and a Final Four program at Oklahoma State, and I believe this staff is as good as I have been around. I was impressed with Brad in every phase of the program this year.”

Clemson was outstanding on the defensive end of the court, leading the league in scoring defense for the first time in 12 years. Clemson’s .402 field goal percentage defense was the best by a Tiger team since the 1958-59 season.