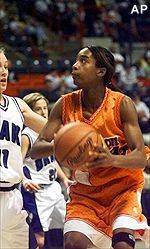 Clemson Advances With A 64-50 Decision Over Drake

STORRS, Conn. — Erin Batth scored 17 points and grabbed nine rebounds Saturday night, leading Clemson to a 64-50 victory over Drake in the first round of the NCAA women’s basketball Tournament at Storrs, CT. Clemson will now meet number-one ranked UCONN in the second round at Storrs Sunday night at 9:00 PM. The game will be shown on national television over ESPN-2.

Clemson improved to 19-11 with the victory while Drake fell to 23-7. The Bulldogs had won their last seven games and had lost just three games over the last three months prior to the loss to Clemson. Clemson, the number-nine seed, gained its third win under Jim Davis as a lower seed.

Batth’s point total was her top performance since she scored a season high 21 points against East Carolina on December 30. She made 7-16 shots from the field, had two blocks and two steals in keying a Clemson defense that forced 20 turnovers and allowed Drake just 31.4 percent shooting. Batth’s defense was equally important as she held Drake’s leading scorer, Carla Bennett to 10 points, five under her average. Bennett had just five field goal attempts the entire night and just two were out of the Drake offense.

Drake was led in scoring by Kristin Santa with 13 points, while Erin Richards had 12. Richards entered the game as the number-four three-point percentage shooter in the nation, but she was 0-6 from long range against Clemson’s strong perimeter defense. The Clemson guards also held point guard Stephanie Schmitz to 0-8 shooting and three points.

In the first half, Drake took a 13-12 lead with 10:30 remaining as Carla Bennett hit a field goal from underneath. The Bulldogs hit a dry spell and did not scored in the next 6:57. From this point, the Lady Tigers went on a 15-0 run behind Chrissy Floyd six points and took a 27-13 lead with 3:52 left. Clemson took a 31-18 advantage into the lockerroom. Clemson had a 15-5 advantage in terms of turnover margin in the first half and that contributed to Clemson’s lead.

The two teams battled on even terms for most of the second half. The lead toggled from 13 to 11 points until Clemson took a 15 point lead at 49-33 with 8:55 left on a layup by Joannie Mungro. Drake cut the lead to nine with 4:35 left two free throws by Santa, but the Bulldogs never got close.